February 16, 2011
(Latin proverb: "Hay is more acceptable to an ass than gold." As a card-collector, I resemble that remark. It's time for Cardboard Appreciation. This is the 101st in a series): 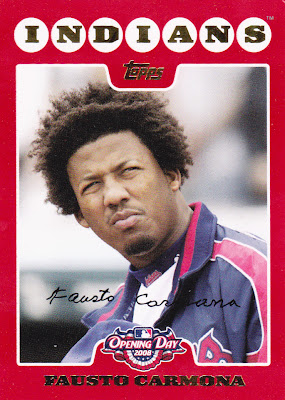 If you haven't noticed, the blogging world can be a very snarky place. Everyone and everything is the target of ridicule. And if you've never been on Twitter, then I'm here to tell you, it's a lot worse there.

One of the Snarky Elite's favorite targets is the past. Thank goodness they didn't live then, right? They pull out a card from the '70s or '80s and poke fun at the player's facial hair or sideburns or style of dress. I'd like to say it's done with love, and sometimes it is. But other times I wonder.

It's during those times when I think, "what will people 20 years from now pinpoint and ridicule?" What are we doing or wearing or how are we appearing that will be considered the most pathetic, cheesy, dumb-ass behavior by people who are existing in 2031? After all, I've been a little snide and superior periodically. Maybe I have it coming.

It's difficult to step outside of your time period and look at your culture with an objective eye, pinpointing the actions that people decades from now will universally criticize for being pathetically of its era.

But I'm going to give it a try.

I'm going to say that 20 years from now, when people are sifting through baseball cards to rip on, probably in an attempt to make themselves feel superior, they're going to pull out the 2008 Opening Day Fausto Carmona card and mock it relentlessly.

BASEBALL DAD said…
Any Tribe card is an awesome card !
Your LA Dudes were sent yesterday. got the Tribe today.Great !! Will post soon.
February 16, 2011 at 9:12 PM