Duke and my card collection 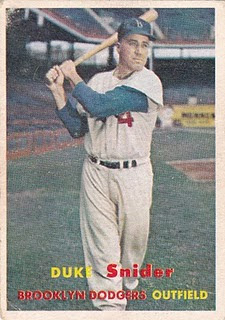 I was not old enough to see Snider play. To me, Snider was a picture on a baseball card and photos in Roger Kahn's "The Boys of Summer." I first got to know of Snider the person when he was a broadcaster for the Montreal Expos. I'd watch him on television when I was a kid summering in Buffalo, N.Y.

That's what I see when I think of Snider, a guy with a microphone, long sideburns and a garish '70s television broadcasting jacket.

As I got older, Snider became something else. He was the picture on the oldest card I had, a 1951 Topps. It didn't come into my collection without some pain, but to this date, it is one of the key parts of my collection. 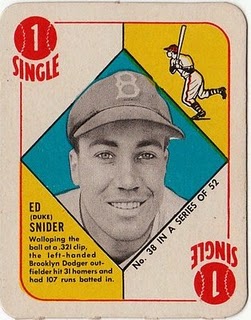 A couple of years after that, I landed the 1957 Duke Snider card and that also became one of the centerpieces of my collection.

In college, I read "The Boys of Summer" for the first time. Snider was never my favorite player from those teams -- I'm thinking Pee Wee Reese might be my favorite -- but he was always in the top three or four.

Snider played a key part in another stage of my collecting. He was among the first successes in my foray into TTM autograph requests.

Here are the cards he signed for me: 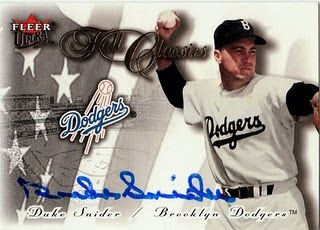 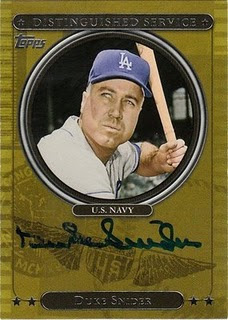 As you can see, Snider has meant quite a bit to my card collection -- I just posted about him two days ago --  even if I didn't see a single game that he played. The man stopped playing before I was born.

But that was the power of Snider.

Snider was a point of pride for me -- from a collecting standpoint and also from a rooting standpoint. The Terry Cashman song "Talkin' Baseball (Willie, Mickey and the Duke)," addressed a player from one of my favorite teams. Fans of only two other teams can say that.

And thanks for all you did for this fan and collector.

Erik said…
Very sad news, with the loss of guys like Snider and Bob Feller it seems like we're losing the end of what might be the greatest era of baseball.
February 27, 2011 at 8:19 PM

There aren't many Brooklyn Dodgers left.The Duke was one of my favorites.

Kevin said…
I just read "Boys of Summer" for the first time, which is kind of funny because I read Roger Kahn's follow-up book, "Memories of Summer", years ago. Anyway, my favorite Dodger from that era is probably Carl Erskine. He just seems like an incredibly good-hearted person. I was thrilled to see that his card was part of the lot of 71 cards that I won in a 1959 Topps auction on eBay a few weeks ago. I think it's the first "Oisk" in my collection.
February 28, 2011 at 8:03 AM