'56 of the month: Pete Runnels 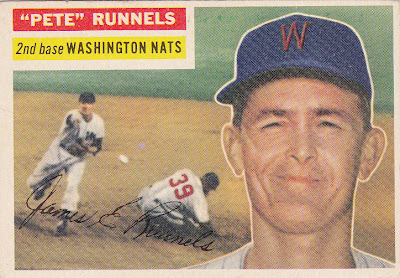 When I was in elementary school, teachers would line the kids up by height when we were headed somewhere as a class. Before arriving at the lunch room or the library, it was imperative that we positioned ourselves in order by declining height. I can remember teachers getting very worked up over this.

I could never figure out why it was necessary -- maybe to keep an eye on the tall troublemakers? But I know I didn't like the practice because I was a short kid (a perk of Italian ancestry) and found myself in the back of the line every time.

While the home room teacher waved her hand over our heads, sizing up our stature, and helping to brand the stereotype in our heads for life that tall was "good" and short was "bad," I pouted over never being able to be the first to walk into the cafeteria or the gym locker room.

This is why I was drawn to players like Pete Runnels.

Runnels actually wasn't a short man. He was just shy of 6 feet tall. But he played "short." He was a singles hitter. A terrific singles hitter. He was a good fielder, although teams never really could figure out where to play him.

But, most importantly, Runnels knew who he was, even as he was battling the best players in the major leagues for the batting title.

"A guy like me doesn't win batting titles with his muscles. He does it with his head," he was quoted as saying. "Recent champions like (Ted) Williams, Mickey Mantle, Stan Musial, Harvey Kuenn and Hank Aaron can scare opposing pitchers. I don't scare anybody. I have to out-think and outguess the fellow on the pitching mound."

I didn't have the athletic talent that Runnels had. But I did figure out -- probably while I was standing in line in elementary school -- where my strengths were in life. I was never going to be first in line and I was never going to play professional sports for a living (I found that out long before some other poor saps did who had less time to figure out what they were really going to do to make a living). So, I relied on what I had: smarts, a sense of humor, and the ability to work as hard as hell.

For seven years, Runnels worked as hard as hell for the basement Washington Nationals. He was a rare gem in a woeful lineup. He was known as a gentlemanly player, someone who got the job done, even if he was toiling at the end of the American League line.

In 1957, he slumped to .230 and even Washington had had enough. He was traded to Boston, a team with some problems, but not as many as the Nationals. Runnels thrived with the Red Sox. Fenway Park was more suited to his hitting than Griffith Stadium. New teammate Ted Williams recommended that Runnels try to spray the ball more, rather than pull it as was his tendency. Fenway Park benefited that type of hitter.

Runnels took the advice and very nearly beat Williams out for the A.L. batting title in his first year with the Red Sox even though he was battling stomach ulcers the final month of the season. In 1960, Runnels did win the batting title, hitting .320. For the five years he was with the Red Sox, Runnels did not fall under .300, and he hit a home run as an All-Star in 1962. He had figured out how to utilize his talents, even if no one was "scared" of him. 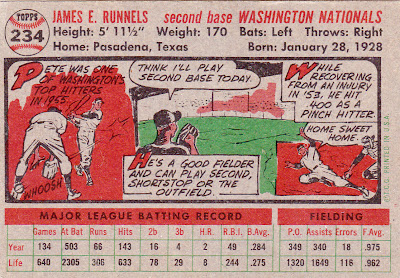 Runnels' given name was James, but he was nicknamed "Little Pete" after his father, and the name stuck.

Runnels finished his career with the Houston Colt .45s, as he wanted to play close to home and Red Sox owner Tom Yawkey obliged. Runnels returned to Boston to work as an interim manager after Billy Herman was fired in 1966. Players campaigned to have Runnels named the permanent manager, but Runnels declined.

In retirement, he opened a sporting goods store and founded a co-ed summer camp. He died from a stroke at age 64 in 1991.

My favorite part of this card is the seeming smirk on Runnels' face. I don't believe it's a smirk at all, looking at his other baseball cards. I think that was his "photo smile." If he was anything like me, he didn't enjoy having his picture taken and the most difficult part was smiling when you were forced to smile.

I also like the full-color action photograph, which was new for the 1956 set.

Runnels may not have been muscular, a star or the first one in the room, but as far as I was concerned when I obtained this card as a teenager, he had one of the best cards in the entire set.

Sometimes that's how the cards fall. No matter how you try to line them up.

(I realize Randy Newman's song is about prejudice. But it's hard to explain that to an 11-year-old, especially if you keep getting sent to the back of the line).