Everybody plays the fool 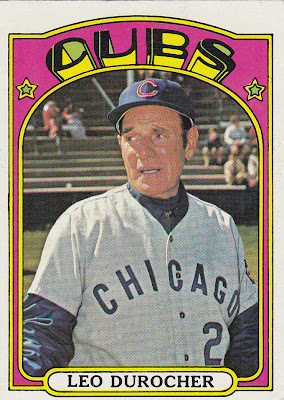 The 1972 Topps set has been popular among bloggers at least since I started this thing. But collecting the set seems to have become more of a priority lately.

I'm still trying to finish off the '71 set, and then I really should get working on '77 as it's a whole lot easier to collect than a few others I'm chasing. It's certainly easier than trying to complete the '72 set, which features high numbers that are downright evil.

But none of that is stopping my interest in the '72s. In fact, I have just added my list of '72 needs to my want list. It's a pretty hefty series of numbers but I'm determined to finish it off someday. 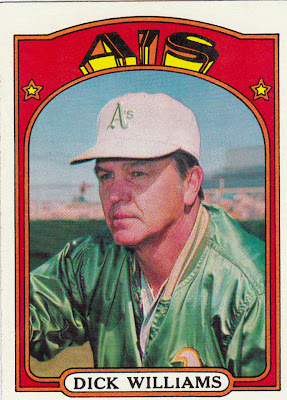 Why do I like it so much? Well, I wrote about that already. But, briefly, I like it because it's one of the most colorful, quirkiest mainstream sets ever produced. It is also one of those sets, along with 1971, that were the first "old" cards I ever saw during my initial days of collecting when I was 9 years old. They were relics, along with Gilligan's Island and I Dream of Jeanie reruns, from a time before I was aware of the world around me. 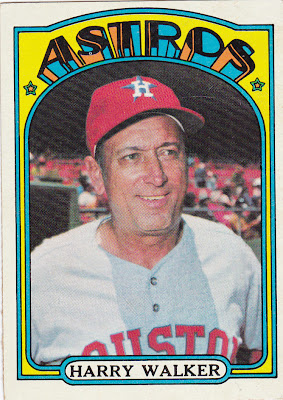 But probably the biggest reason I collect it is simply because of the way it looks. I think the Astros cards in the set are my favorites. There is something about that bright yellow frame with the bright blue popping out the letters that makes these the most interesting cards that I think I've ever seen. There's a reason why the '72 Cesar Cedeno card is in my blog header. 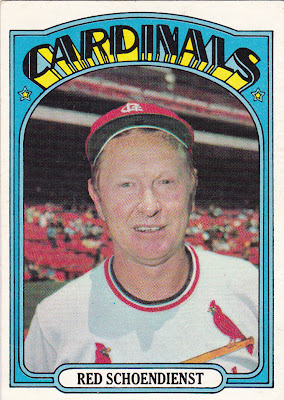 The blue borders of the Cardinals and the Orioles are my second favorites. I am hearbroken that the Dodgers did not get these borders. 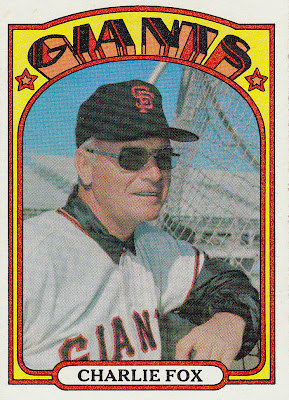 Look, I realize the '72 set isn't everybody's cup o' mo-jo. The design kind of looks like something a 12-year-old would draw. The colors may be too bright. There is no position listed on the front of the card, which has been known to irk a certain owl.

Throw in the massive number of cards in the set (787) and the high numbers that will run you double figures for even the most common of players, and some collectors may consider us foolish for collecting this set.

But when you're in love, being foolish comes with the territory. It may be factual, it may be cruel. 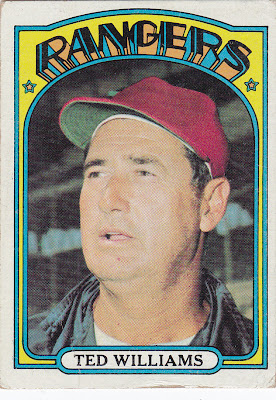 By now, you've probably wondered why all the cards shown are manager cards. It's for one reason only -- other than I think there should always be manager cards in a base set: 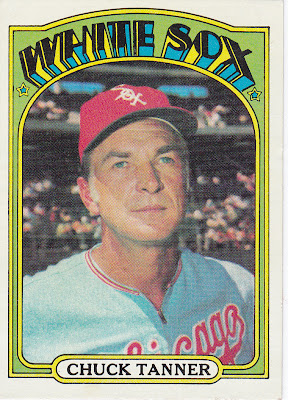 You were always a Pirate to me. But your positive, outgoing nature certainly fits in with the '72s.

Hackenbush said…
I collected this set as a kid and have a lot of it including high numbers but I realized recently that I'm missing the entire 4th series. I have no idea why. Maybe the drugstore I got them from missed a shipment? I'll never know.
February 13, 2011 at 5:56 PM

Wrigley Wax said…
I enjoyed putting the '72 set together more than any other set. Ebay can be your friend with the last series if you're patient. My plan was to buy as many as I could off of a single seller; usually each week there were one or two that had a bunch available.

How concerned are you about card condition? I've got a decent stack of '72 doubles. If you're interested let me know and then I'll dig through your want list.
February 13, 2011 at 7:44 PM

Jim from Downingtown said…
The 1972 set was the last that I collected as a kid back in the day.