February 24, 2011
(I received a tremendous card package in the mail Tuesday. Who knows when I'll get around to posting it here, so I'm just going to say thanks while the memory and amazement are fresh. Kris, you did real good. Here's to super-generous card bloggers. They are definitely appreciated. And in honor of them, it's time for Cardboard Appreciation. This is the 102st in a series): 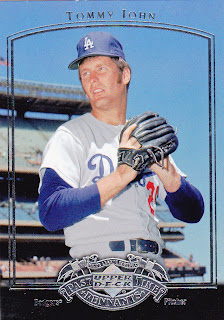 Last month, Tommy John came to my town to speak at a fund-raiser. I didn't get to talk to him. I had to work.

But since I work for a newspaper, I did assign someone to cover the event, and he documented what John had to say as a good reporter will do.

John is and always has been an interesting and likable sort. Although his decision to leave the Dodgers for the Yankees annoyed me and I reveled in the fact that L.A. won a title after he left, he is one of the few Yankees that didn't not bother me when he played for them. Probably because I think of him as a Dodger and not a Yankee.

If it wasn't for his arm injury in the middle of the 1974 season, he may have won a championship with L.A. that year, but John doesn't appear to have any regrets. In his conversation with our reporter, he credited the breakthrough surgery for allowing him to last as long as he did in the major leagues. He did win 288 games after all.

Here are a few of the interesting things he mentioned in the interview with our reporter:

1. Before he speaks at functions, he feels out the crowd to get an idea of what he's going to talk about. One time he found out that a woman who was at the function never ironed his husband's shirts (yeah, I know what my wife is saying, "why doesn't he iron his OWN shirts?"). So John brought his iron to the speech and did a tutorial on ironing.

2. He has an issue with the "perception is reality" phenomenon, specifically citing the criticism given Jay Cutler because he didn't exhibit visible emotion after he was injured during the NFC championship. He said in baseball, you pitch or you hit, and then you go back and sit in the dugout and nobody cares whether you're jumping up and down or head-butting anyone. He likes that.

3. Most players today have no idea who he is. Those who have heard of "Tommy John surgery" thinks it refers to a doctor named Tommy John who performs the surgery. So, kiddies, just to set the record straight, the doctor's name is Frank Jobe. Commit it to memory.

4. He got a real kick out of playing for the Dodgers and Yankees because he is a fan of baseball history (good for him!), and you can't get more historical than those two teams.

5. He is no fan of pitch counts. He cited a study done by Dr. Jim Andrews, the famous orthopedic surgeon, that concluded that 12-year-olds can safely throw 85 pitches a game as long as they get enough proper rest in between appearances. John's point was if a 12-year-old can throw 85 pitches, than an adult major league pitcher with the finest coaches and medical doctors around can sure as hell throw 100-plus pitches every five days. Or, he said, Andrews' study is bunk.

6. He would like to be in the Hall of Fame, but hopes it happens while he's still aware enough of what's going on so he can give his speech. He mentioned a study that concluded that his stats were better than half of the pitchers already in the Hall.

7. He doesn't fault the surgery for falling 12 games short of 300 wins. But he did indirectly fault the Angels' bullpen in 1982. John mentioned that he pitched probably his best that year, but "Luis Sanchez was our closer and I think he had only six saves." Actually, Sanchez had five, and he wasn't the closer that year. Doug Corbett was and he had eight.

I always got a kick out of John and his conversation didn't do anything to lesson my impression. If I was maybe younger and more eager, I would've done the interview myself. Hell, he was a Dodger from my childhood. But instead I just write a blog post about it. That's how old I am.

By now, you're probably wondering why I picked this John card out of all the ones I have of him.

Well, it's simply to point out the ridiculousness of most parallels.

Here is the parallel card to the base card shown at the top of the post: 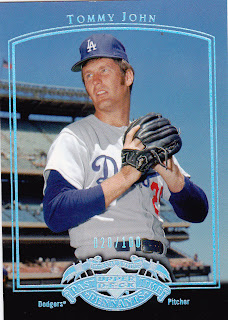 I looked at the two of these cards side by side for 10 minutes and couldn't figure out why this card was numbered and the base card was not.

It wasn't until I scanned both cards that I figured it out:

The numbered card has a refractor-like shine on the foil. It appears blueish on the scan. But in person it's almost impossible to determine. So if I didn't have a scanner, I'd still be studying these two cards like a clueless puppy staring at bubbles.

A lot has changed since Tommy John pitched. Fewer wives iron their husband's shirts, more players don't know the history of the game, pitchers are treated like time-bombs, and football players are failures if they don't hyperventilate on the sidelines.

But there are two things that I'm sure of:

And Tommy John is the man.

(P.S. This post inspired by Adam Wainwright and Vicente Padilla).

Jim said…
Great post. I featured a 2005 Upper Deck Past Time Pennants card in my post last night too. How strange is it that a set I had never heard of until yesterday should be featured twice in the blogoverse in one day?
February 24, 2011 at 8:01 AM

Play at the Plate said…
My dad told me Tommy John should be in the Hall of Fame. I never checked the numbers, but that makes it sound liked dad was right.
February 24, 2011 at 9:05 AM

Justin McLeod said…
"This is the 102st in a series". I consider it my duty to correct you whenever necessary, and take on the persona of "Grumpy English teacher"