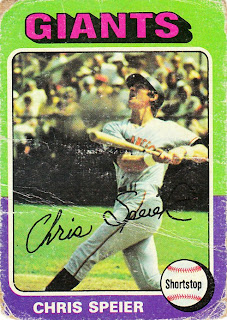 When I was a rug rat, I was obsessed with this card. I loved it. I didn't care that it was a Giant. All I knew about Giants is that they lived at the top of beanstalks.

When I traded a bunch of regular-sized 1975 Topps cards to my friend for a handful of mini cards, this card stayed behind (that's the actual card I pulled in the scan). I liked it too much to even surrender it for a mini.

The best part of the card, of course, is the action. It's not an ordinary action photo, as Chris Speier appears to have popped up, perhaps out of play. But the positioning of the bat on the backswing isn't something you see everyday, and the intense expression on Speier's face is classic.

As I began to collect older cards, I came across earlier Speier cards. The thing that struck me is how equally great they were. 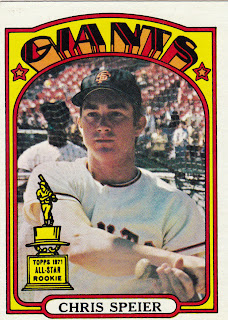 1972: The photo isn't terribly special, although batting cage shots ruled during the 1970s. That kind of card was always worth keeping. The best part, though, is the giant rookie trophy. That was the last year that Topps used that trophy. 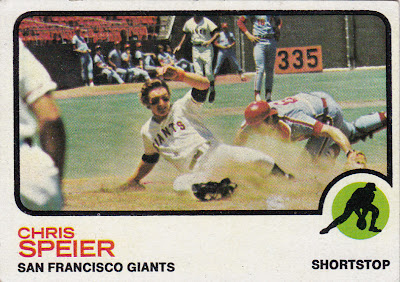 1973: This is easily the best Speier card of all-time. You can't go wrong with a play at the plate. Plus you have an audience of the third base coach, the third baseman, the left fielder and the entire Phillies bullpen. If that's not enough, the Phillies catcher -- who appears to be Tim McCarver (he wore No. 6 with Philly at this time) -- is getting a face full of dirt. 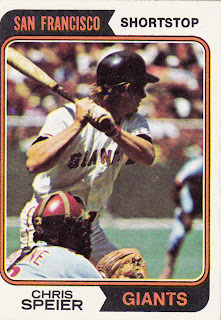 1974: Another game against the Phillies, although Bob Boone is the catcher here. Same game? I don't know. But I do know how great it was to get a card featuring in-game action during the mid-70s. It wasn't very common. A close-up shot of game action was even more rare.

So you put those cards together ... 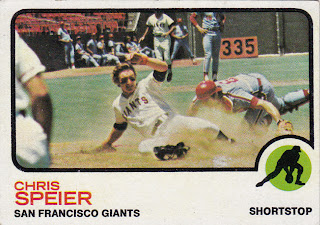 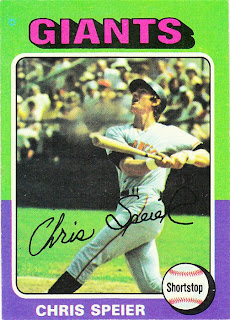 ... and I'd say you have the best four-year run in card history.

Keep in mind, this is the '70s we're talking about. There are probably lots of players from within the last 20 years that featured four straight years of great cards. But it's a lot easier to do that now with modern photography and card production. It wasn't that easy back then.

Also, keep in mind, that I hate the Giants with every fiber. So you know that there must be something to this.

Speier had a long career, but his cards just didn't hold up. Sure there was the card of him tagging out Derrel Thomas in 1983 and another nice action photo in 1986. But there was also the awful airbrush card of 1985, and a bunch of boring poses of Speier in his mustache during the late '70s/early '80s.

But for four thrilling years, Speier was the king of cardboard.

Go ahead. I challenge you to find a better four-year card run for a player. There are probably a few better out there. But let's hope they aren't stinkin' Giants.

(P.S.: This is also my Card Love post for The Other World's Pyramid contest).

Maybe the player with the best cards of all time. Check out.

LoCoDe said…
Those are excellent cards. I always like to think of Chris as an Expo. He wasn't great with the bat, but he was consistent, and he wasn't a gold glover at SS but he got the job done.
February 9, 2011 at 9:17 PM

LoCoDe said…
I could be wrong here but...McCarver was Carlton's caddy. Speier hit an inside the park 2 run homer off of Carlton on July 15, 1972 at Candlestick.
Despite being a Saturday game, attendance was only 5984, which would explain the empty bleachers. The Phillies scored 11 runs in the 7th and won 11-4. Carlton did not get the win, despite 1972 being the amazing 27-10 season.

steelehere said…
Finding players with the best four year 1970's run could be a future post/poll.

Here are some potential competitors: