Score another one for the set collector 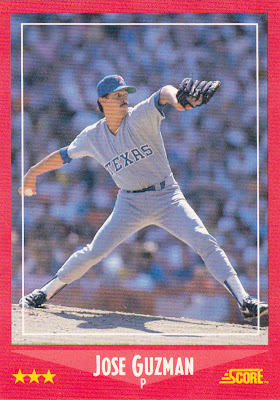 Last week, I completed another one of my favorite sets, thanks to a handful of cards sent to me by Johnny Hiflew of Cards From the Quarry.

I didn't even see '88 Score when it first came out, since I hardly collected that year. But that hasn't stopped me from loving all the bright-colored borders, the cool (for its time) action shots, a complete rundown of just about everyone who was playing at that time, and the super informative backs.

Sure, '88 Score is "junk wax" and completing it isn't all that impressive. I'm sure there is at least one blogger who has 15 completed sets of '88 Score in his closet. But I really do have a lot of fun looking through it in a binder, paging through the purple cards first, then the blue, red, green, yellow and gold.

Here are the last cards that I received (Guzman included) to finish it off: 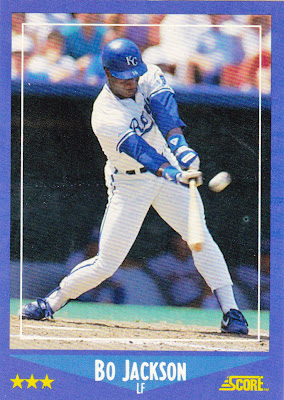 Not surprised this was one of the last ones. People hoard their Bo Jackson cards. 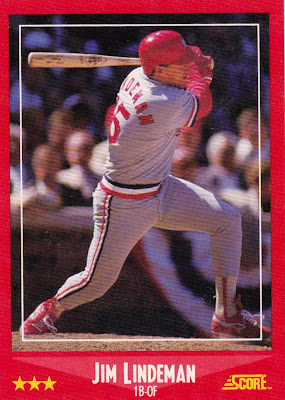 One of the best parts of '88 Score is the cardboard version of harmonic convergence when border color and team color correspond. Some of the best-looking cards you will ever see. 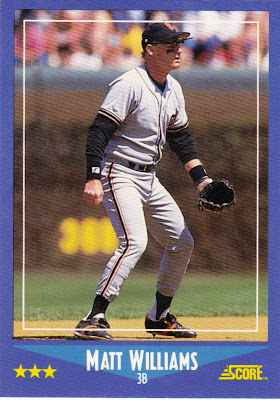 Heartbreaking Cards recently mentioned that Matt Williams, whom I despise, once was married to Michelle Johnson, whom I lusted after as a teenager. He didn't link to a photo of the lovely Michelle. I guess he figured every last male has seen Blame It on Rio. I'm going to assume the same. Horrible movie. But very ... um ... visually appealing. 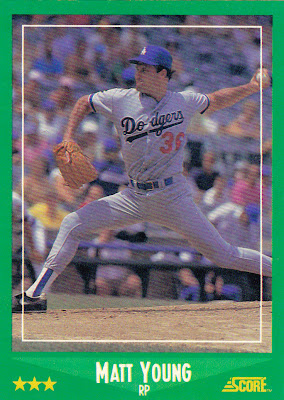 Somehow, I didn't notice that one of the cards on my want list was Matt Young. I'm sure I have 46 of this card in the team dupes box, only because Young likes to turn up in a mistaken assumption that I am my father, who ripped on Young for his inefficiency every second he wore a Red Sox uniform. 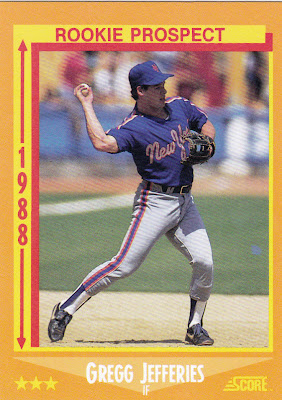 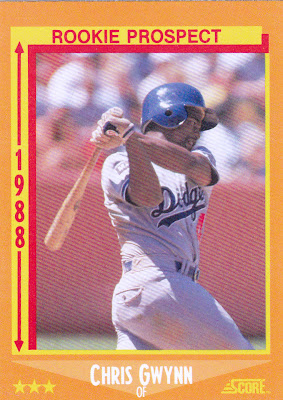 The Rookie Prospects subset looks cheap to me, with the random divergent arrows and the clip art geometric designs. 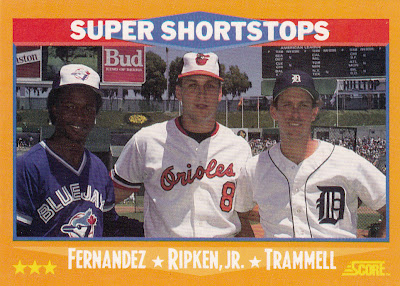 This card reminds me that Topps appears to have done away with Classic Combos cards for the 2011 set. ... hmmm, I may reconsider collecting that set, yet. But I apologize for comparing this card to the recent Classic Combos. This card is so much better.

With the completion of the '88 Score set, I have now finished off 13 sets since the start of this blog. Here they are:

Plus, I am very close to completing 5 or 6 other sets.

Considering that I completed just 8 sets prior to starting this blog, I think that's a pretty good indication of how important the blog has been to my hobby of choice. I would have completed less than half of the above without the great collectors out there.

Meanwhile, collecting continues in other areas. I received several Dodger items from hiflew, too. Here they are: 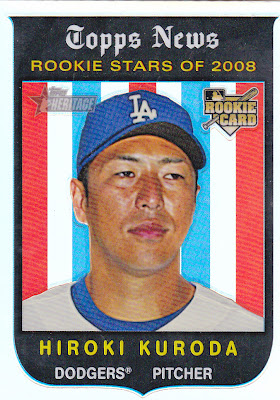 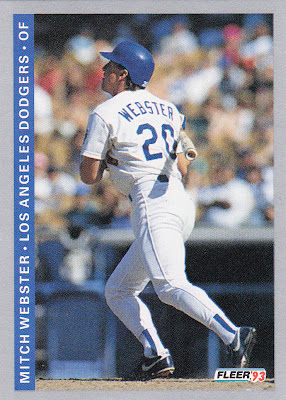 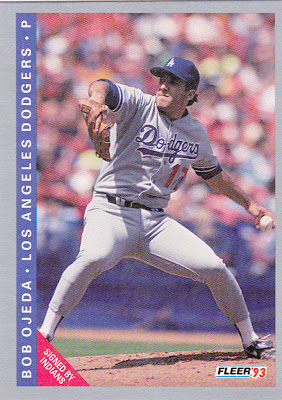 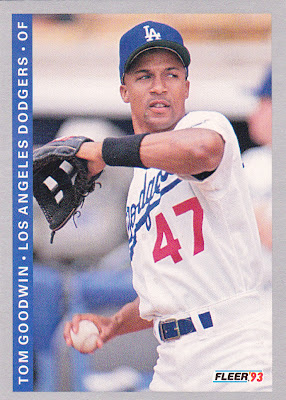 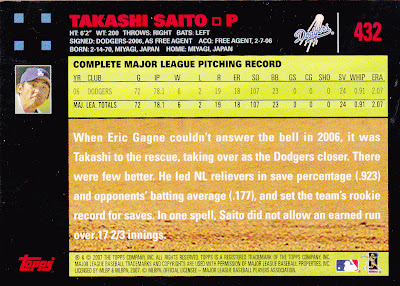 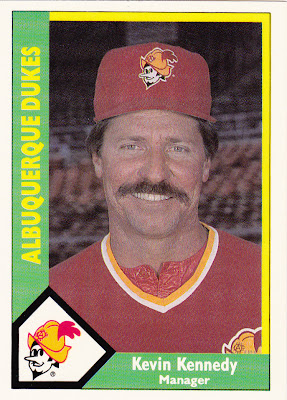 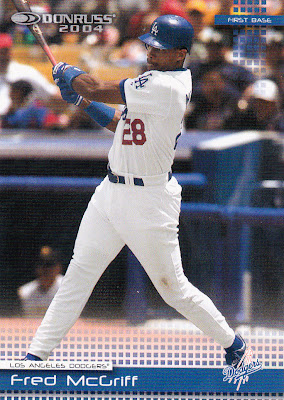 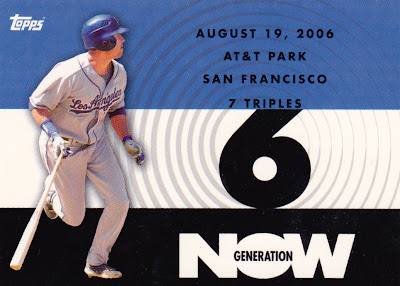 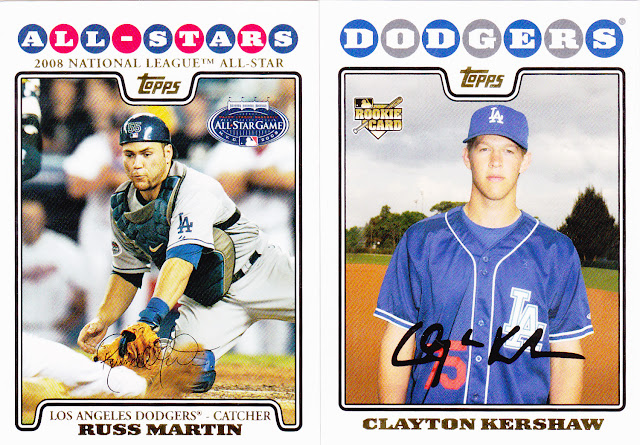 The Kuroda Heritage Chrome card is what touched off the trade. The 1993 Fleer cards are much appreciated as it's been one of the more frustrating junk wax team sets to complete. The Kevin Kennedy card is too comical for words. The 2008 Topps U&H cards are the gold letter variation cards, which are too stupid for words.

So, the '88 Score set is safely in a binder. And that means I really should add another set want list to my want list page. I think I'll finally throw the '72 Topps set needs on there. It will dwarf all the other set needs, but I've got to start somewhere.

Who knows? Maybe I'll complete '72 before I get that '08 Heritage thing finished.

thosebackpages said…
i love this post. i love the 80's sets, all of them!

TJ said…
I need to get that Bo Jackson. That's one of the baddest cards I've ever seen. I seem to remember having a handful of '88 score when it came out, but I'm sure if I flip through all my cards I won't find a single one.

I wish I didn't just say that. Now my OCD is kicking in and I'm going to have to look and find one.

hiflew said…
Glad you enjoyed them and finally finished off the 88 Score. When I reentered the hobby, 3 88 Score boxes were the first purchase I made.

I still love the set and I remember buying some packs the first day it came out.