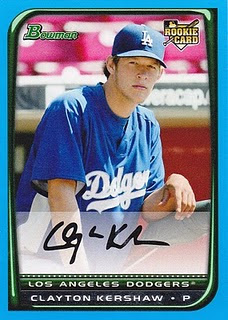 Most card collectors I know are "good eggs." Sure, there are rotten people in every line of work, but somehow collecting pictures of ballplayers -- especially baseball players -- draws folks that I consider "likable." They're my kind of people.

This presents an interesting situation, because if you haven't noticed, there are a great deal of athletes who are definitely not good eggs. They are horrid, putrid eggs that emit a foul odor in every direction. Why we are collecting cards of these people I haven't a clue.

Whenever I think about that, it gets disheartening. If there ever occurs a time when I stop collecting cards, it won't be because of card company shenanigans. It will be because I believe that there is not one professional player worth admiring, and consequently not worth collecting.

Fortunately, that hasn't happened yet.

The example that I'm getting at is Clayton Kershaw. There have been a few articles written lately about my favorite current ballplayer. He's got a lot going for him other than being my favorite player. He's a Dodger, filled with talent and promise, and an all-around good egg. He was just named as the Opening Day starter for the Dodgers against the Giants on March 31.

In December, he got married to his childhood sweetheart. His new wife, Ellen, is a good egg, too. She went to Zambia as a college student. Since then, she has been back several times, helping to take care of children orphaned by the AIDS epidemic in that country. During the offseason, she convinced Clayton to visit Zambia.

Clayton was reluctant, but once he went, he couldn't help but be affected. "It changes you," Kershaw said in a New York Times story published Saturday. "And that's good."

But because this is 2011 and this is the internet, Kershaw's offseason of do-gooding naturally was met with a few snarky comments from the usual crowd. You know the type: insecure, insignificant, self-absorbed, self-amused do-nothing trolls who stumble out of their suburban hole long enough to tap out something wildly unfunny.

If that's what they want to do, fine. I would think reflecting on a talented ballplayer marrying at 22 years old, going to Zambia to help orphans, coming back with a feeling of gratitude about how fortunate he is and we are as a country, is slightly more constructive.

But anyway, here's the comment that I want to make: Good for a ballplayer, spending his offseason not hoarding vehicles or hanging out with strippers, but starting a family and helping improve the lives of people he doesn't even know. At least someone out there is playing against type and not self-destructing in public, as entertaining as that is to so many sad, needy, empty people.

I admire an athlete who instead of showing how much he has, shows us how much we have, and how little others have. An athlete that may cause someone to think, "Hey, I have two SUVs in the garage, maybe I'm really not struggling as much as I think I am."

I'm not gullible enough to think that Kershaw will always be this squeaky clean. People change and money changes people.

I'm also not clueless enough to think that Kershaw won't be beset by injuries or even always be a Dodger. Stuff happens.

And that's why I collect his cards. I don't have to say, "I know he's an asshole, but ..." All I have to say is, "I know some consider him a little dorky, but here are some cards of his that people sent me": 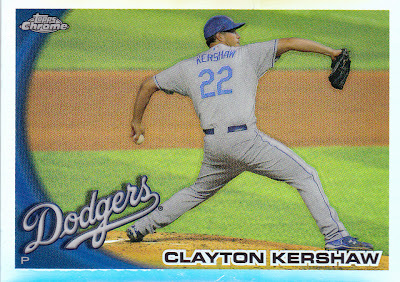 A masterful refractor from Mr J Mel at Closet Full of Cardboard. 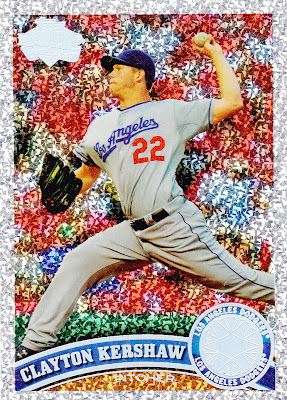 A diamond dazzler from Greg H. at Wolverine Musings. 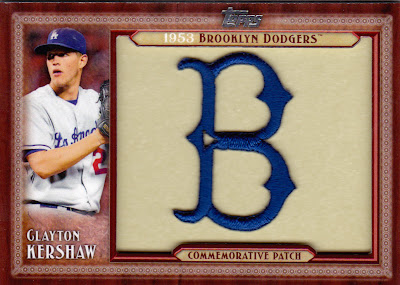 And a manu-patch item (yes, I know Kershaw wasn't alive in 1953) from Baseball Dad at All Tribe Baseball.

Each of them sent other cards that you'll probably see someday, but I am the happiest about the three Kershaw cards.

I rip on ballplayers, too. I've done it plenty. Sometimes they deserve it, maybe sometimes they don't. But to rag on someone immediately after being informed that the topic of their derision has just done something that the fool commenter wouldn't even think to achieve is simply not cool. It makes me ... well, it makes me write this post.

I suppose that's what the trolls want. A reaction.

After all, it's the best that they can do.

Play at the Plate said…
Good for him and good for you for publicizing it. There aren't enough stories out there about the athletes that ARE doing good things.
February 28, 2011 at 4:37 AM

the sewingmachineguy said…
This story reminds me of the Miguel Cabrera/Brandon Inge dichotomy. Miggy is a superstar, but stinks to high heaven of rotten egg. Inge is an average player, at best, but spends lots of time at a children's hospital making kids with cancer feel good. I like a story about a pro athlete giving back.
Thanks.
February 28, 2011 at 8:02 AM

Potch said…
Really enjoy reading your blog - and information such as this is a particular delight to read. Thanks.

I've always liked Kershaw as well and glad to read that the affection is justified.

On another note, went to a card show yesterday and among my bounty I grabbed a "Duke Snider" Topps 60 card for 20 cents. (I sort of like these cards for some reason.) When I left, turned on the radio and heard he had died. Another tough loss for baseball fans.
February 28, 2011 at 11:18 AM