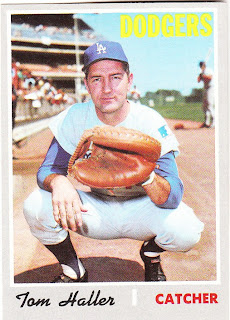 I know, I know, I said we'd stay in the 1960s for awhile. But, I'll let you in on a little secret. The card back countdown isn't set in stone. Although there is a basic layout and plan, the individual pieces shift around a bit. There is a lot of fine-tuning going on!

Besides, I consider the 1970 Topps set to be part of the '60s. Although the gray borders were completely different from what a lot collectors knew at the time, and signaled a new decade in collecting, the backs were similar to a lot of the 1960s Topps cards.

Card backs in the '60s contained bright colors, and Topps extended that trend one more year with the 1970 set, before entering the "dark-colors card back era" for the rest of the decade.

The 1970 card back is certainly bright, one of the brightest around. It would fit very well with the 1972 or 1975 Topps sets. But Topps chose to pair it up with one of the duller card fronts that it would produce. 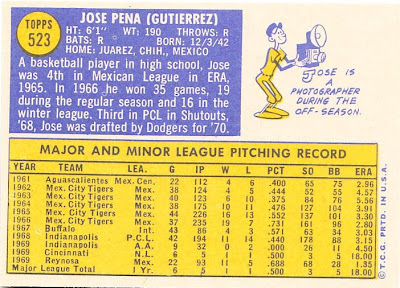 I didn't see many 1970 cards when I was a kid. The set came out about five years before I started collecting. But I do remember the first 1970 card that I saw. It was Fred Norman of the Dodgers. I was visiting my friend's house and he had the card.

I remember turning the card over and having to pull my head back at the bright blue and yellow coming off the cardboard. Wow, what a switch from the card front! 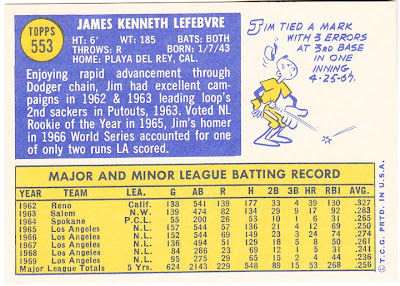 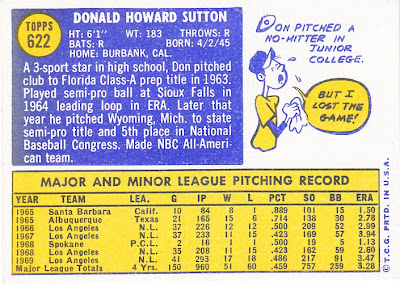 I like this cartoon. The cartoon bubble gives you added information!

One drawback to this set is a problem for several sets. Topps dropped the cartoon for players with lengthy careers. Boooooo!

All-in-all, this is a nice card back effort from 1970 Topps (it'll be hard for me to find anything negative to say about the cards from herein out). The two-tone back was certainly different, as different as the card fronts if you ask me.

My interest in collecting this set is zero, so I only have Dodgers. No best of the set today.

Jim Q said…
I've read all 720 of the 1970 Topps cardbacks, and an inordinate number of them speak to the player's career in high school, college, or the minor leagues. I don't know if this was a pre-set theme, or simply coincidence, but it got a little tiresome. It has to be difficult to come up with new material every year for so many mediocre players; maybe this was their way around it that year.
October 19, 2010 at 2:56 PM