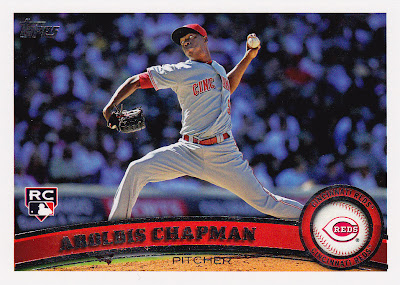 Out of all the teams in major league baseball, it would be the most embarrassing for Topps if I evaluated all the colors that it used for Reds cards and determined that the majority color was NOT Red.

What if it was green or brown or pink?

Oh, the shame! The humiliation! The ignominy! They'd be disgraced! Mortified! Topps would issue their next set in black-and-white!

Anyway, I think it's certain that after I look through all the years in which Topps used specific colors based on the team that was featured, that red is going to be the color that appears the most.

That's because around the late '80s, Topps started paying attention to stuff like this. The 1974 set was the first time, but it wasn't a consistent thing until around 1985 or so. To illustrate, here is the color count for the Reds before the 1974 set:

The only red representative was in the 1965 set when the lettering for the team name was red.

But that was in the crazy psychedelic days when the whole population was on drugs and the sky was yellow and the grass was orange and people burst into song about incense and peppermints for no reason at all.

Today, the color red rules the Reds on cardboard and live and in person.

I believe that's the first appearance of magenta in the team color list. That wild-and-crazy '92 Topps.

I suppose this is where I reflect on the Reds and how I perceive them and all that. Well, I'm still trying to get interested in them. They've been such a shrug-your-shoulders team for so long. And before that I hated them. I suppose if they get good enough, I'll hate them again. But it'll never be the same as the old N.L. West days. Especially as long as they're wearing black as a secondary color.

So, time for the final verdict:

What Topps thinks are the Reds team colors: Red! 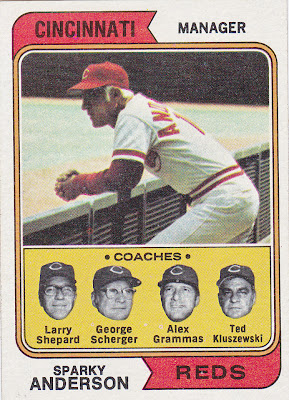 Anonymous said…
I used to hate the Dodgers, too. That and the Braves are the rivalry I miss the most. But mostly the Dodgers.
February 18, 2011 at 3:08 PM

thosebackpages said…
"They've been such a shrug-your-shoulders team for so long. "