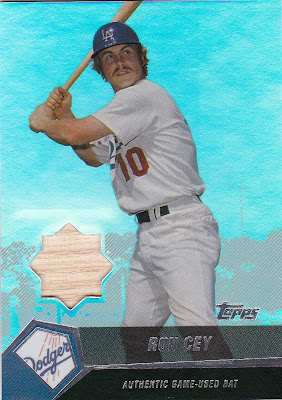 If you're a home owner, then you might know the joy of water in the basement all too well. I am currently dealing with this delightful diversion and have had little time for blog following or writing.

But I want to get this post out before the house starts floating down the street.

Ron Cey's 63rd birthday was last Tuesday. Since he is my most favorite player of all-time, I had ordered this little beauty to post on the occasion of his special day. Unfortunately, the mail has been exceedingly slow the last few weeks (snow must be kicking the mail carrier's butt), and packages aren't arriving in the mail box at the usual pace.

So, the card -- a 2004 Topps Clubhouse Relic -- didn't arrive in time to post on his birthday. But I still want to show it because it's not often that I can find a Cey card that I don't have. Plus, it's a snazzy-if-mysterious item. The background kind of reminds me of those Soundgarden videos from the early '90s. I don't know what that video technique is called, but all the grunge bands were using it. Also, the scan made the background blue -- which would have been awesome -- but it's really a silver color.

Any bat card, especially one from a player who is retired, makes me wonder if that is really wood from one of Cey's bats, or wood from a bat at all. The wood looks identical to the bar stool that is sitting directly to the left of me. I know the card reads "authentic," but I'm not convinced.

Still I'm happy to get this card and obtain it in honor of Cey's birthday, even if I am late. The Penguin is as awesome as they come.

While I got the Cey card, I nabbed a couple of Kershaw items. 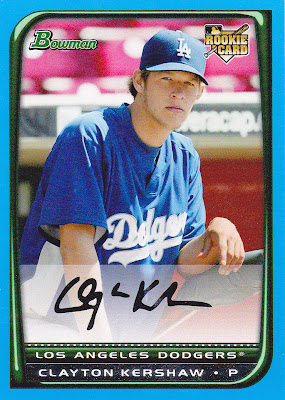 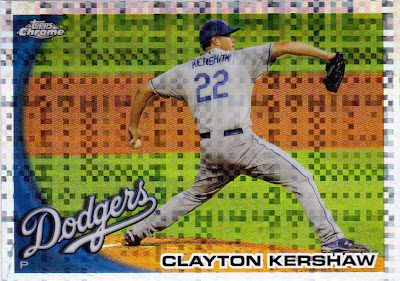 An xrefractor Kershaw from 2010 Chrome. While I was waiting for this item, someone else sent me this card. Heh.

OK, that's all I've got for today. The basement calls ...

Unknown said…
Ron Cey has the best autographs. One of my favorites. he will be in Albuquerque on September 20 signing.
February 19, 2011 at 4:09 PM

Greg Zakwin said…
Can you set that extra Kershaw XFractor aside for a later trade?
February 19, 2011 at 5:49 PM