February 02, 2011
(Remember when you were a kid and you hoped and prayed that there would be a snow day? Well, I do the same thing as an adult, because snow days still mean much less work for me. Even after all these years, school is a hassle and snow can be fun. Here's to appreciating snow -- I know that's difficult for some of you. Time for Cardboard Appreciation. It's the 99th in a series): 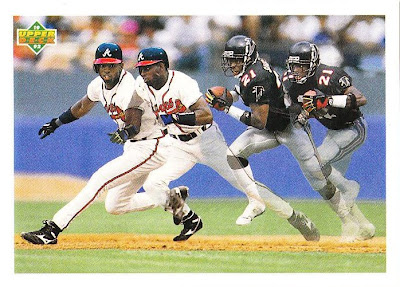 I didn't play football in high school. I didn't play it at any level of school or in pee wees. I didn't even play it much on the playground or in a friend's backyard. We'd throw the football around a little. But full-on tackle football? Never did that.

The kids in my neighborhood didn't really think about football that much. It might have been a product of living in the Northeast. By the time football rolled around, it was getting a little too cold to play outside (that's what our moms told us anyway). Football seemed made for watching on TV, not actually doing. Football was just something there because baseball wasn't anymore.

All of my playground games involved bases. Kick ball, softball and baseball. My brothers and I, along with Matt, Bobby, Billy and David, John, Sue, Molly and Eileen (when we forced her to play), would play some version of base-ball every day we possibly could. There was no room for any other sport.

I think that's why, to this day, the concept of playing football seems a little foreign to me. Participating in a game in which someone is pursuing you is fine. But participating in a game in which someone chases you, grabs you and then throws you down to the ground, over and over and over, just seems mildly unpleasant. The ground isn't exactly made out of pillows. This gets more and more apparent the older I get.

Then there is the life of an offensive lineman. Your whole existence, for your whole career, is standing in a tiny area of the field and trying not to let a giant human get past you. It's like moving a really heavy piece of furniture, but not really getting anywhere.

Playing baseball I understand. I see why people want to do it. Playing football, well, a lot of times I can't figure out why anyone would want to do it.

So when I came across people like Deion Sanders and Bo Jackson, who were talented enough to play both sports professionally, my question always was why? Why go through all of that when you can play baseball FULL-TIME?

I always wanted someone to ask them: "Which do you like playing better, football or baseball?" Of course, they'd probably say "football" and that would throw me into a righteous fit. "Idiot. Don't you know baseball is the greatest game ever?"

When Brian Jordan scrapped football to play baseball, there was a man I could understand. I didn't care what the circumstances were behind the move, I just liked the outcome.

This Sunday, I'll be watching the Super Bowl like I have every year for the last 35 years. I'll ooh and ahh over the great pass receptions, runs and sacks. But I will never once wish I was out there on the field with them.

I only do that with baseball.

Of course, if Deion had only played baseball, we wouldn't have this tremendous card. 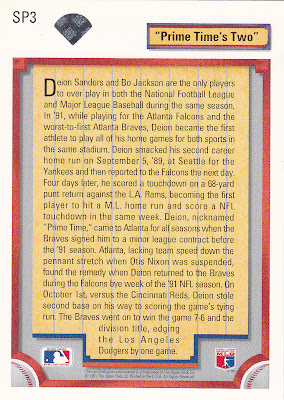 Anonymous said…
I actually pulled that card from a pack in the summer of 1992. The local mom & pop grocery story had a box of 92 UD and I talked my grandma into buying me a pack (for something ridiculous like $3.99 a pack) almost every time we went shopping. I had no idea who Primetime was, all I remember thinking was that this was about the sweetest card ever.
February 2, 2011 at 12:09 PM

Orioles Magic said…
That was a pretty awesome card. Even if you never cared for Neon Deion.
February 2, 2011 at 2:29 PM

Derek Hill said…
I've still got all those SP's. The Henderson/Ryan, the Thomas/Selek/ the Jordan, etc

guess they found they were onto something with some inserts
February 2, 2011 at 8:49 PM

Business Broker said…
I just found this card in a home I bought. It is between plastic frame. Is it worth anything?
January 25, 2018 at 4:53 PM