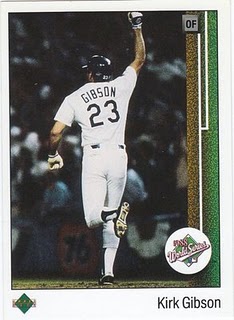 Are you bummed that the NFL season is over for the year, or conceivably longer? Depressed that you have to wait until March for another tournament-style sporting event?

Well, I am here to accommodate your sports-addicted self.

We are near the very end of the longest tournament I can think of ... in the 20 seconds in which I attempted to think of such things. The tournament has pitted the very best night cards I have ever seen against each other. They are battling to win the very first spot in my night card binder.

This is far more exciting than seeing receivers drop footballs.

We have even determined one of the cards that will be in the Awesomest Night Card finale!

It's the 1989 Upper Deck Kirk Gibson World Series card. Gibson took on the entire 1981 All-Star Game in the last matchup and won easily. Gibby can do it all.

Here are the results of the vote:

Gibson heads off to the final with his fist triumphantly thrust into the air.

Here are the two cards that will battle it out in the other semifinal for the chance to face Gibson: 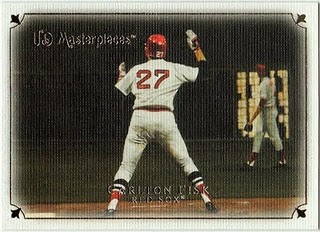 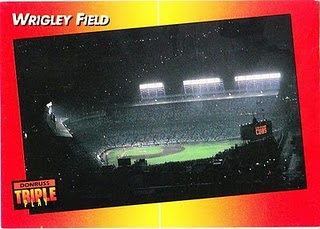 So which card will get a chance to face Gibson? Will it be an all-tuckus matchup? Or will Gibson take on another stadium like he did in the semifinals?

Decide for yourself by voting in the poll on the sidebar.

Hey, maybe it's not as interesting as the Super Bowl. But at least nobody's wearing gold pants. I've had enough of that for awhile.

Eggrocket said…
I know I've ranted about the Fisk-rump card before, so I'll spare you that this time around ... but ... are we really going to have a final of two cards using shots from the back? Bleh.

Excepting the truly classic 1973 Johnny Bench, cards with shots from behind were never popular with me.

AdamE said…
When I go to the ballpark and take pictures I always try to get a shot that is at an angle were I can see a players name or number on the back of their jersey. Why? Because that way I will always be able to identify them even if I forget their face. I'm glad that both cards featured in the finals will mimic my own ballpark pics.

Except for Mazeroski and Bobby Thompson no home runs in the history of the game were as big as Fisk or Gibson's. This is also going to pit two of the most famous home runs of all time against each other.

If my comments were not clue enough I'm picking Fisk over Wrigley to stay perfect.