August 31, 2010
(Today is National Trail Mix day. Really. It's actually appropriate because we are camping today. And by "we" I mean, not "me" but "people that I am close to." I need my air-conditioned comfort. It's Cardboard Appreciation time. This is the 79th in a series): 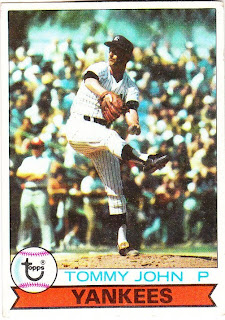 With all the talk about Stephen Strasburg and Tommy John last week, I started thinking about my Tommy John cards.

Yes, it's taken me a week to get to this. I'm always behind. I prefer it that way. How are those capless 206 cards coming?

John is an interesting player in my collection. First, he is on the first card that I ever owned. Second, he was a Dodger from my childhood who was a bit of a mystery man. When I first followed the team, he was off recovering from revolutionary surgery and not part of the team.

Third, he left the Dodgers after 1978 to become a member of the hated enemy. And I still think it's funny that he didn't win a title with them, yet his old team beat his new team to win the Series three years after he left his old team.

Finally, he is on what I consider my first "traded" card.

Traded cards have been around since the 1972 Topps set (If you expand the definition, I suppose you could consider some of those high series cards from the 1960s, with the players airbrushed into their new caps, traded cards). But I wasn't collecting then.

I vaguely recall having a few 1974 Topps Traded cards, but, of course, I threw those out at the end of the season.

Later, Topps issued Traded sets in the early 1980s, and I thought they were awesome.

But there was a period in the late 1970s where I began to see cards that looked like Topps, right down to that year's design, but depicted some players in their brand new uniforms.

These were cards from Burger King and I wanted these cards very, very badly. Unfortunately, they weren't anywhere around me. Burger King was still a fairly new concept in my area in the 1970s. I still remember the first Burger King going up in my town. McDonald's ruled the landscape back then. But even with the new Burger King, I couldn't figure how to get the cards.

I saw them in mail-order catalogues. Then, a friend or two ended up with some cards. Of course, they were Burger King Yankees, because of where I lived. But even though they were Yankees, I still wanted them. Seeing a player on a design you knew but with a completely different uniform was mind-blowing.

That was in 1978 and another year went by before I finally got my hands on a Burger King card.

I don't even know how I ended up with the 1979 Burger King Tommy John card. You'd think someone who wanted a card like that so badly would have the memory etched in their brain. Unfortunately, that memory is gone so that I might continue to memorize all the words to the theme song to Welcome Back, Kotter.

But I do remember that once I had obtained the card, that I would keep it a secret from anyone else who collected cards. I didn't want Yankees fans to know I had this card, or they would hound me until I didn't have it anymore.

I marveled at the sameness and the differences between the two cards -- the regular Topps issue and the Burger King issue. 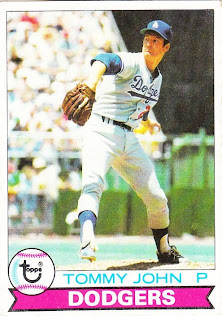 That is the regular Topps issue. The photo is different, obviously (although the situation is basically the same). The team name is different. The ribbon is a different color. But everything else is wonderfully the same.

Later I found out that there were Burger King cards for other teams -- the Tigers, the Phillies, etc. (I sort of knew the Phillies part, because the 1979 Burger King Pete Rose card was always displayed in the Larry Fritsch catalog).

These cards were the only way to get a select few of the players in their up-to-date uniforms. And we thought it was the coolest thing that a card company could do.

I believe the John card is the only Burger King card I have to this day (I need to check my Dodgers). It takes away a bit of the sting of him going to the Yankees.