August 11, 2010
(Today is "Presidential Joke Day," a day that began when President Reagan mistakenly joked into a live microphone that he had outlawed Russia and would begin bombing in five minutes. That's the power of the president -- make a joke and they turn it into a holiday. This is Cardboard Appreciation. This is the 76th in a series): 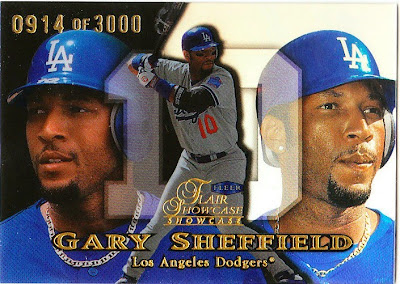 I don't know how there got to be three of me. One day I was thinking about how someone disrespected me AGAIN and started getting all juiced up -- um, I mean, worked up -- and I blinked or something and there were THREE of me. I don't think it was anything I took. I mean I don't even know what I was taking anyway. This dude just put some cream on my knee and I had no idea what it was. No idea. People walk up to me all the time and rub stuff on me. I mean that happens to everybody. Every day. Stop singling me out. You're always trying to make an example out of me. Why you hassling me? It's not supposed to work like that anyway. You're supposed to DEVELOP not DUPLICATE. Or triplicate. Whatever. Am I right? Of course I'm right. Shut up. I'm Gary Sheffield. I'm always right. We're always right. All three of us. Don't get us riled up. Like now. You just looked at me -- I mean us --wrong. Don't be playing. I KNOW you looked at us wrong. You can't control me. Who do you think you are, Joe Torre? He couldn't control me. That Carmona guy couldn't control me. I came after him. We came after him. All three of us. You could only see one of us. But there was really three. Because we can be invisible when we want to be. You know, like that hot chick in the Fantastic Four movie. Jessica Alba. She is so fine. Mmmmmm. But I ain't no chick. I mean, we ain't no chick. So that Carmona better watch his ass. Even now. I know I'm not playing ball now. But we're still watching. All three of us. From the luxury box. Where we deserve to be.

And we're watching wearing a lot of gold. See those chains on the card? All three of us have them. Those aren't even our thickest chains. We have much thicker chains. They're as thick as steaks. Real steaks. Steaks that only I deserve. You need three people to eat them. Sometimes we wear steaks around our necks. And we beat up people who try to make fun of us. But mostly we wear our thick gold. Lots and lots and lots of thick gold. Teams don't like to give us the gold we deserve. That's why I kept changing teams. They were holding out on me. We need to get paid. Our season is when we get paid. No pay. No season. And you need to pay my elbow guard, too. You need to pay all three of our elbow guards. Pay up. Or it will kill you. All three of them will kill you. Three times. You'll be dead. Three times dead. Killed by elbow guards. Because we didn't get paid. How do you expect me to feed my family? Oh, wait, that was Sprewell. There ain't three of him. That was his problem. But there are three of me. That's how I can feed my family. One goes to the store, one cooks the meal, and one sits down with the family. That's how a real man does it. You're not a real man. You wouldn't know.

But I'm thinking this card doesn't have enough gold. If it wasn't for my chains, all there would be is that tiny gold writing in the middle. It takes up only 25 percent of the card, That's nothing. 25 percent. That's not getting paid. I deserve 100 percent. 100 percent gold. Don't limit my gold. You can't control me. You see me in the batter's box? Do I look like I can be controlled? I've got the quickest swing ever. Not even Barry can swing faster than me. But don't tell him I said that. He gets mad. His elbow guard is bigger than mine. And meaner. But I ain't afraid. I ain't afraid of nobody. Nobody can control me. Not even Jessica Alba. She can't control me. Not even when she showed up that one time in the movie in her underwear.

You know why? Because I'm three people in one. I'm a perfect 10. That's my number. Ten. See it on the card? It's big, but not big enough. Just like those gold numbers at the top. They need to be larger. And there needs to be some of those exclamation points. A whole bunch of them. It needs to say, "Hey collector, there are only 3,000 of these and you get lucky 914. You're a lucky collector. You're a REAL lucky collector. Hey, collector -- listen to me. You're lucky. Did you hear what I said? You're lucky. Now BE lucky. I don't think you're BEING very lucky. How about if I come out there and show you how lucky you should be? Yeah, I think you're going to get a lesson from three Sheffields because you don't know how lucky you are to have this card."

Kevin said…
That was one of the funniest blog posts I've ever read. For some reason your version of Gary Sheffield reminds me of Little Richard ("Shut up!"), even though I think it's a portrayal of Little Richard from some TV skit that's floating around in my memory...probably In Living Color.