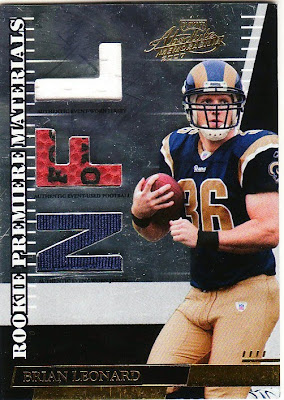 I am trying to keep these Brush With Greatness posts to baseball while there are still some baseball players left to feature. But I will make an exception for this one card.

First, the card was sent to me by Ben of Cardboard Icons. It's fancy, shiny, over-the-top, all of that, and it must be recognized. Secondly, it's a card of a player that I covered when he was in high school. And to see him on a trading card -- even though he is entering his fourth season in the NFL -- still blows my mind.

Brian Leonard was just a goofy kid from a school that sits literally in the middle of nowhere. The school is located in a town built along a single road. There are several stoplights along the way, but if you leave the main road and travel to the left or the right, you are in countryside in less than 5 minutes.

The town is in the largest county east of the Mississippi River. It's very sparsely populated, on the northern edge of the Adirondack Mountains. Most of the high schools are very small and the school's athletes traditionally fair poorly compared with other areas in the state. The schools are so small that most don't feature football teams. Consequently, the football isn't very competitive. Up until Leonard came along, I think only other player from the county made the NFL.

That was the situation Leonard grew up in: a gullible kid without a conceited bone in his body existing in a small town in a giant country with few people in an uncompetitive environment lacking a history of major athletic success.

And Leonard is in the NFL.

That's what talent will do. People will find you.

I often think about Leonard co-existing on the same team as Chad Ochocinco, Terrell Owens and Carson Palmer and chuckle to myself. This is the same kid whose coach could getting him to do anything -- a fired up, almost squirrely boy with a perpetual grin, who had no idea that he just set the state record for most touchdowns in a game.

That's what being able to hurdle standing tacklers will do.

Leonard's NFL career is pretty much as a third- and fourth-down guy who can make the catch in the open field and get you some yards. He's got speed and power and the NFL always likes that. He was featured on HBO's Hard Knocks last year when they dedicated their series to the Bengals.

Leonard isn't as accessible to us as he was as a high school kid. It was difficult to get ahold of him for awhile there. Lately, we've been able to reach him once or twice a year, which is adequate. He still sounds like the same goofy, eager kid that he was at age 17.

Since Leonard made it to the NFL, another player from a town 30 miles away has made the pros, too. Actually for such a sparsely populated area, it's amazing how many locals ended competing professionally in sports.

Many thanks to Ben for adding this card to my Brush With Greatness collection. He also contributed some more typical cards: 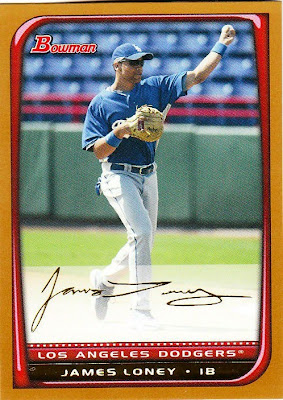 A golden James Loney from 2008 Bowman. As good as a season as Loney is having, the fact that he's hitting clean-up is not good news for the Dodgers. 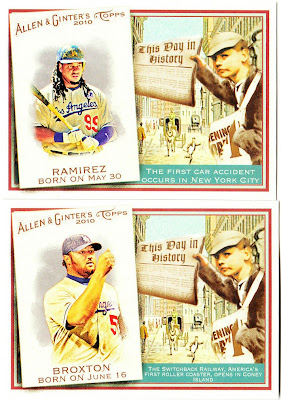 Two more players that will become answers to the question: "Whatever happened to the Dodgers in 2010?" 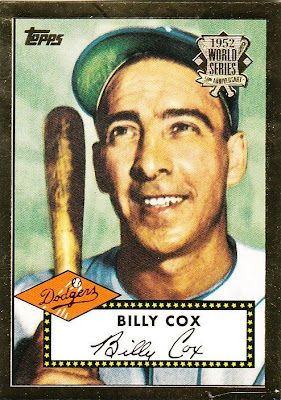 Another golden card, this time of a Boy of Summer. The Dodgers landed both Cox and Preacher Roe from the Pirates in the late 1940s and that ended up helping to make Roger Kahn a household name. 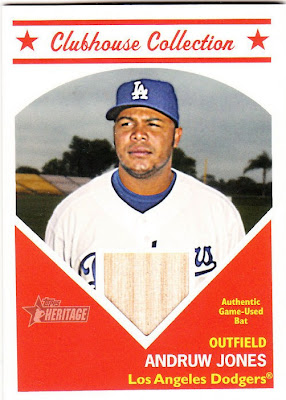 Finally, a suspicious-looking Andruw Jones on a game-used bat card. Given the subject, I'm assuming the bat was not "used" successfully.

About the only thing worse than going through the Dodgers' season right now is if I had to go through it with this guy still on the team.

It's almost enough to make me wonder how those Buffalo Bills are doing.

I can really pick my sports teams can't I?

longlivethewho said…
A Bills fan too eh? I didn't think I'd find another one.

steelehere said…
As a fellow Dodger fan, one way I've been dealing with this lousy season is to also follow their top prospects box scores on MiLB.com.

It's nice to see that the Dodgers have potential replacements for Rafael Furcal in Dee Gordon (39 SB's in AA and plays SS) and Manny Ramirez in Jerry Sands (29 HR's in AA and play OF) if they leave as free agents after the season ends as well as quite a few other prospects better than the ones they traded recently.
August 4, 2010 at 7:40 PM

SpastikMooss said…
Leonard always seemed like a good dude, glad to hear that that's the case. I like your bit about how it's funny that he's on the same team as guys like TO and Ocho Cinco, and I definitely agree. I guess it's nice to have a guy who isn't a major personality on a team that's filled with them.