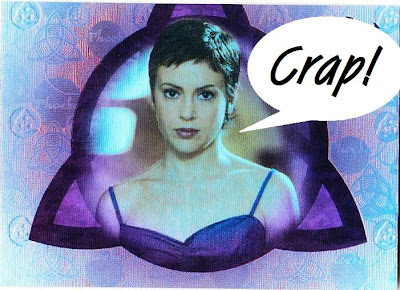 I am one of Alyssa Milano's 80 bajillion followers on Twitter. I don't know why really. I don't have much interest in her tweets, even though she is a rabid, rabid tweeter. I think I was hoping she'd tweet about the Dodgers a little more often -- seeing as she's a diehard fan.

But I think I know why she doesn't tweet about the Dodgers a whole lot.

From being a follower, I've learned that she is relentlessly positive, and there AIN'T NOTHING POSITIVE about the Dodgers. If I had to guess at her reaction to my team's absolute pathetic discarding of a 7-run 8th-inning lead, I'd say it'd be something short and not-so-sweet. Like "crap," or, more likely, something that would violate the Twitter character limit, like:

Really, it's nothing I should be surprised over, just the culmination of a mismanaged ball club from top to bottom, from start to finish. I saw all I needed to see in April. From that disastrous month, that was all the indication necessary to see that the Dodgers were going nowhere.

Therefore, I'm going to do my best to distract myself from my team by writing about various unrelated topics. 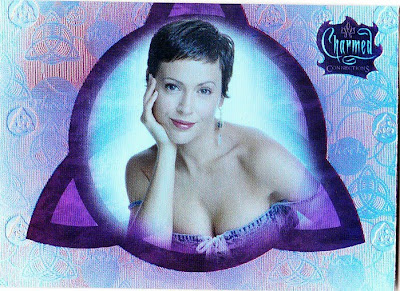 Topic 1: Where'd you get the Alyssa Milano cards?

Answer: Ryan of Trader Crack's Card Blog sent me the Charmed Connections set. He's the master of all cardboard things non-sport, and he was giving away all kinds of cool stuff. I admit I picked up the set because of Alyssa. And I admit I saw the show a number of times. If you didn't notice the outfits they wore, then you weren't male. Unfortunately, this set doesn't have Shannen. I liked Shannen a lot. 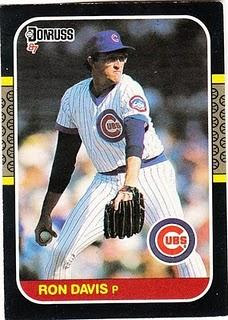 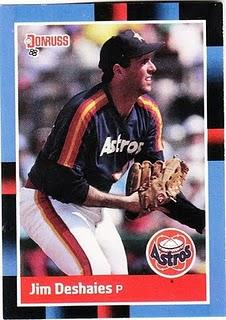 Answer: I will go with "the tire tread set" for 1987 Donruss. I've yet to see tire treads that resemble tiny baseballs, but when you look at, it sure does appear to be a tire tread design. And enough people suggested that, too.

I still have not seen this movie, even though it came out during a time when I watched movies constantly, and, damn, lasers were awesome in the '80s. This sums up what 1980s computer imagery was all about.

So Ben Goetting and dayf will be getting some random 10-year-old packs when I get a chance to send them out. Ben, I need your address, so please send me an email.

Topic 3: Aren't you going to show some cards you got in a trade?

Answer: Oh, fine, if you insist. Here are some cards from Joe of The Sandlot. I don't know if this was so much a trade as it was a fine gesture. He had forgotten one of my cards in the group break that he had held. So he sent out a special package for moi! What a nice upstanding young man. 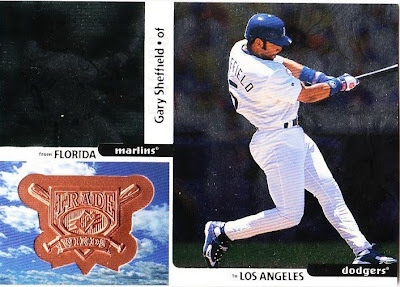 There's the card he noticed he didn't send. Fancy, eh? It's of Sheff. Don't look at it wrong. 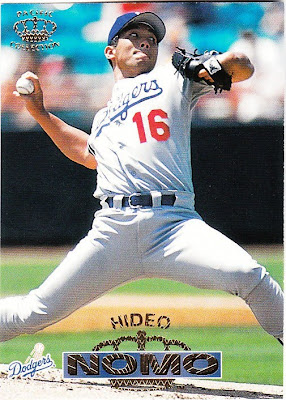 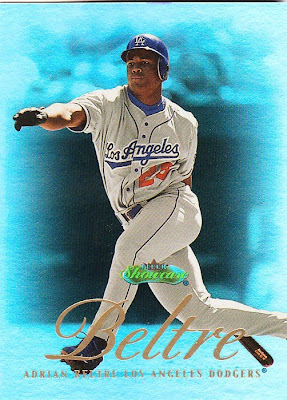 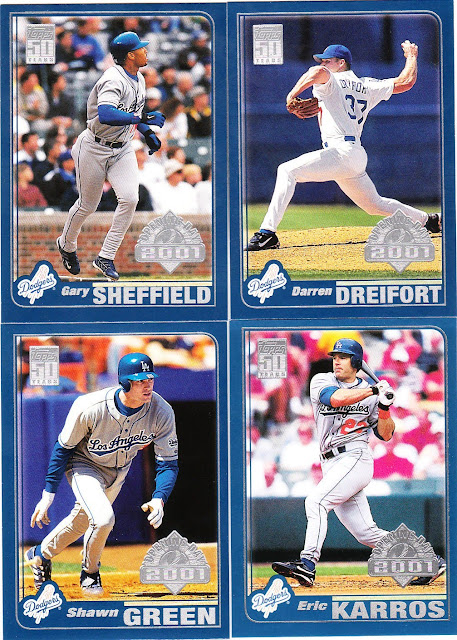 Those are a bunch more. Needed them all. Thanks a lot, Joe.

Topic 4: I thought you weren't going to talk about the Dodgers.

Answer: Yeah, you're right. Sorry about that. How about this? I was thinking of this the other day: Are there more annoying baseball announcers on television now than at any other point in history?

Think about it. Once you had Chris Berman -- who mostly avoided baseball anyway -- and some random guy on some cable channel that most people didn't even know existed.

Now you've got Berman, Joe Morgan, Joe Buck, Tim McCarver, Charley Steiner, Eric Byrnes, Steve Lyons, Ken Harrelson, Michael Kay, sometimes Jon Miller, and a whole bunch I probably have no idea exist. It seems every team has an irksome broadcaster. What happened to baseball broadcasting as a profession? We used to look up to these guys. What changed?

All right, I think that gave me a chance to calm down a little bit.

How about you, Alyssa, things better with you? 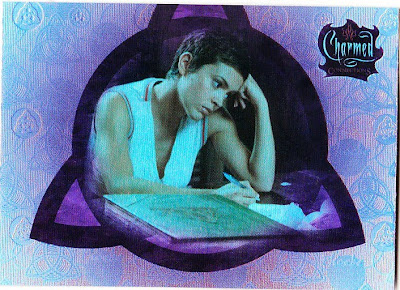 Play at the Plate said…
Alyssa's putting on a gun show!

Dodgerbobble said…
I was mad as hell last night. But the anger didn't last long. I think deep down I know it's a lost season. No reason to get crazy.

Nice Alyssa cards BTW. She's a good fan, but definitely too damn positive. She tweets some strange crap too. She'll tweet Dodgers one minute, then yoga garbage the next, and save the animals crap after that.
August 13, 2010 at 10:36 AM

dayf said…
You know what, I was rooting for you guys the past few nights but after that debacle I hope the Braves really plant a can o' whoopass on you. I didn't need Chipper Jones out for the season and losing a game in the standings like that all in one day.

In short, Death to the Dodgers, Jonathan Broxton sucks, fire Joe Torre, throw McCourt and his wife into an active volcano and move the whole shebang back to Brooklyn where they belong.

Community Gum said…
Thank you for putting Ken Harrelson on the list of horrible announcers. He is THE reason I'm not a Sox fan. Although, I must say his call to end the Buerhle perfect game gave me chills. Alexi!!!!!
--Jon!!!!!!
August 15, 2010 at 2:31 AM