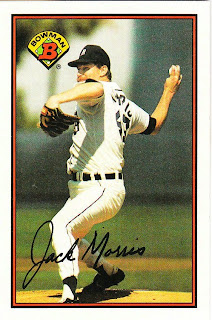 Also, 1989 Bowman -- ressurrected by Topps after an absence of more than 40 years -- seems quaint compared to what we know of Bowman today. Bowman is now synonymous with rookie card madness and is basically crack for Strasburg searchers. So, that gives the '89 Bowman set a little bit of charm, at least for me. But only a little.

The other thing that draws my attention to the set are the backs: 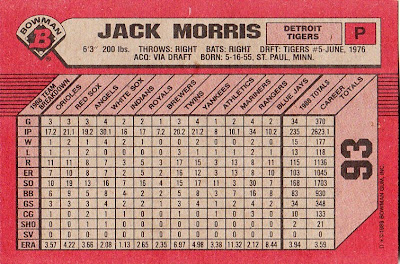 Bowman went with backs that were constructed in a way that I had never seen in 15 years of collecting to that point. Instead of the standard year-by-year statistics, Bowman presented the statistics in terms of how a player performed against each team.

At first glance, this was confusing. But once you knew what you were looking at, it became fascinating. I probably had seen this type of breakdown in the Sporting News before, but never anywhere else, and never on a baseball card. 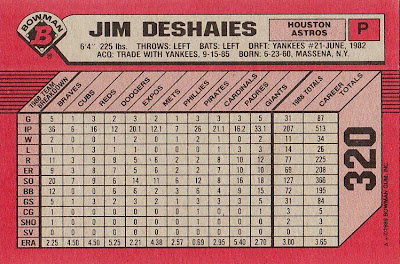 But there you had it -- how a batter or a pitcher stacked up against every team in the league. It was different, informative, and something to take your mind of the "clean" but boring fronts. 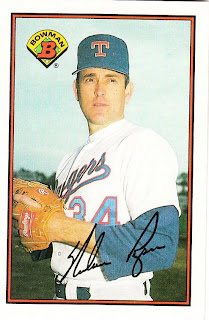 Sometimes the backs could confuse you when you would get a card of a player who had changed teams during the past season, like Nolan Ryan here. He's featured as a member of the American League's Texas Rangers. 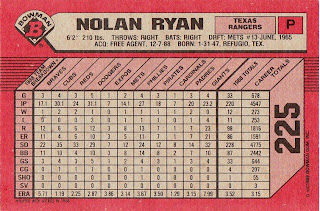 But the stats display National League teams. That is because Ryan pitched for the Astros in 1988, but there is nothing on the card to tell you that. 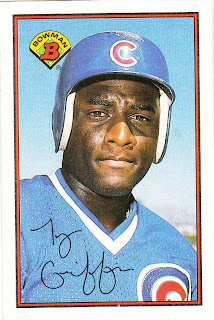 And then there were the times when you came across a young prospect. The 1989 Bowman set was filled with players like Ty Griffin. 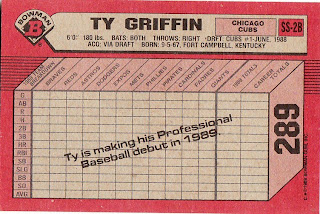 But Ty Griffin didn't have any major league stats yet --  nor would he ever -- so you were stuck with no information at all on the card back. Bowman wouldn't even tell you how Griffin did in college or high school. No mention of hobbies or anything. Now, that is a waste of some cardboard space.

Bowman continued to present its stats in the team-by-team manner for the next couple of years before abandoning it. Truthfully, the format began to wear on me. I just wanted to know how a player did for each season -- probably because years of looking at stats like that had conditioned me to that format.

But for awhile it was an interesting, somewhat innovative way of presenting stats, and I did appreciate it. It made the set stand out if the card fronts didn't. 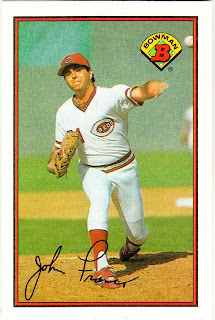 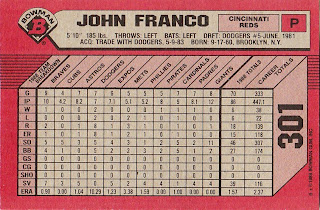 One of the most enjoyable aspects of viewing stats in this manner was seeking out players who performed horribly against the Dodgers. That was good for hours of fun-filled entertainment!

Because of that, I am selecting John Franco as the best card of the set. In 1988, Franco pitched in seven games against the Dodgers, lost twice, allowed eight runs in seven innings, five walks and had an ERA of 10.29. Somehow in there he managed to win two games, too.

Chris Stufflestreet said…
Honestly, I really don't get pleasure out of this...

Re: the Ryan card...if you look at the back again (or click on the photo to enlarge it), you will see -- at the left side, just under the stat box, in tiny black letters -- "Played With Astros in 1988." It goes along with that asterisk beside "1988 Team Breakdown."

But...as a Topps product, it didn't seem they were overly concerned about readability because (in 1989, at least) we didn't need bifocals and special glasses to read them.
August 14, 2010 at 4:35 AM

SpastikMooss said…
The size part killed me, and the fact that size + card stock made these one of the most easily destroyed types of cards in my young collection. I loved the stats though, and weirdly especially the rookie ones where it tells you they have no stats. It is a giant waste, but it's cool when you see words instead of numbers, because that means you've got a XRC or RC on your hands!
August 14, 2010 at 10:16 AM

I should have said, "there's nothing APPARENT on the card to tell you that."

dayf said…
The boring design was trying to emulate the classic simplicity of the 1953 Bowman set. Unfortunately the photography wasn't nearly as good and the huge gaudy Bowman logo blew the elegant factor of the design.

As for the backs I like them for one reason - this kind of team by team information was legitimately tough to find in 1989. Everyone nowadays is spoiled by Elias and STATS and Baseball-Reference.com and a thousand other places you can find statistics on the internet. In 1989 I had the Atlanta Constitution, a phone book sized Baseball Encyclopedia and cards. That's it. It's kind of goofy, but really innovative when you think about it. Similar to the scouting stuff they put on the Stadium Club backs, just not as shiny.
August 14, 2010 at 3:50 PM