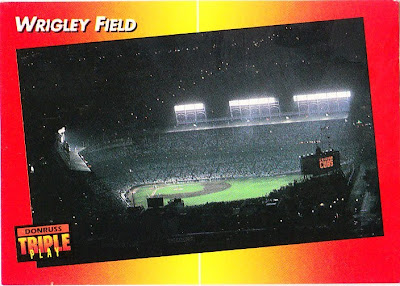 I'll take just a moment here to recognize one of the high holy days of night card-dom.

Twenty-two years ago today, the first complete night game at Wrigley Field took place. The Cubs beat the Mets, 6-4. Frank DiPino got the win, Sid Fernandez the loss, and Goose Gossage the save.

The first night game was actually scheduled for the night before against the Phillies. But after 3 1/2 innings, the game was called because of rain, and the overly dramatic lamented that night baseball "was not meant to be." (I always remember that 8-8-88 date, not because of the numbers, but because it was an old girlfriend's birthdate. We planned something big for when 8-8-88 came around. Unfortunately, when the date came around, the relationship wasn't around).

In the name of progress, the Cubs forged on the next night, won the game, and have continued to host night games ever since.

There was a lot wailing when the Cubs decided to end their run of all day games. I wasn't aware of the degree of resistence there was to the idea until I recently read a book that mentioned how much weight then-commissioner Peter Ueberroth had to throw around to get the team to install lights.

People claimed that the park's "intimacy" would be lost. Posh. Nobody can get intimate at night?

Well, you know what I mean.

Today, you see a night game at Wrigley Field and you don't even give it a thought. My first thoughts of Wrigley are playoff night games -- the Dodgers series a couple years ago. The Marlins in 2003, etc.

Besides, look at the card. That thing is beautiful.

Chris Stufflestreet said…
Hey, I also have a softness about 8/8/88 that involves a girlfriend. For much of high school, I was seeing this girl named Gina. We got back together on that day.

It was the sixth or seventh time we had reconciled after breaking up (yeah, we were that couple) and there were about five more rounds before we broke up for good.

And yes, I remember the first night game at Wrigley...but at 15 years old, after spending time with Gina I really didn't care if I missed watching it.