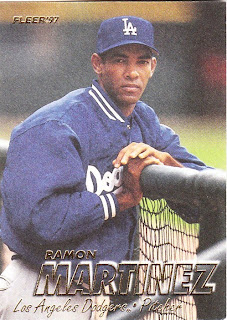 Even that far removed from the card-collecting hobby, I knew Fleer had done something vastly different with its '97 set.

But Fleer -- apparently in the midst of a death wish -- decided to issue a set with a matte finish. I'm sure all the other card companies thought it was quite odd. It was as if your company decided to remove all of the computers in the office and replace them with typewriters. Whaaaa???

I realize Fleer did this first in 1996. But I like the card backs in the '97 set better. And I think it says something about Fleer that they did this two years in a row. What that is, I don't know.

Fleer did issue Tiffany versions of its sets during these years, just to keep the gloss-addicts at bay. But I applaud Fleer for doing something a little different with its base set. 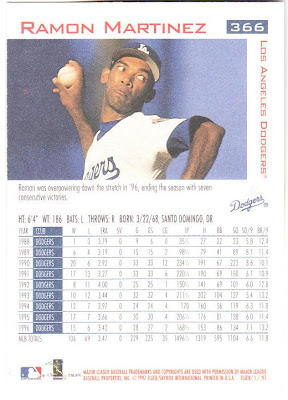 There's the back of the '97 Fleer. That is a nice-looking card back. 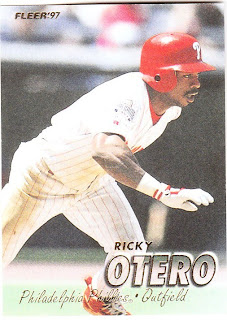 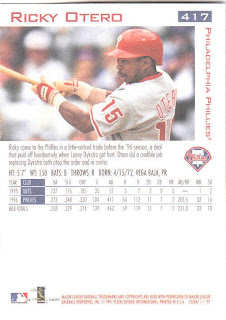 I don't mind the positioning of the bio blurb too much, but I can see why it's a problem. It's scrunched in between the photo and the stats, even though there is all that white space available. 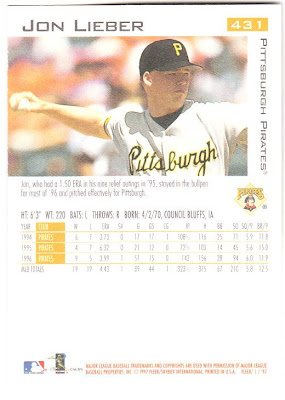 Like the 1996 set, the back is color-coded with the team's colors, which is always cool. It would have been even cooler if Fleer adjusted the colors to match with each team in the career stats. For example, Jon Lieber's first year with the Cubs could have been coded blue. 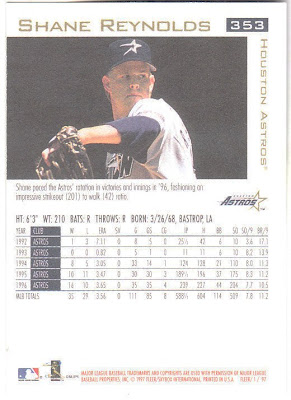 Shane Reynolds. He was the ace of my fantasy pitching staff back in the day. About the only guy who could do anything right. Then he got injured.

The stats appear difficult to read on these scans, but really they are rather easy to read. I love the entire presentation of the card back. Nice job, Fleer. Even if everyone was accusing you of career suicide.

I don't have very many of these cards, but let's say Chili Davis: 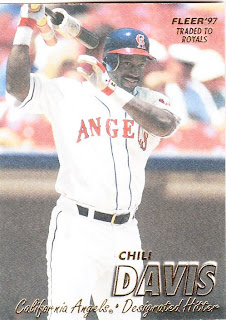 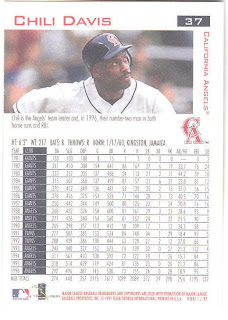 First, you have to like the "traded to Royals" note on the front of the card. That's a nice OPC-like touch. Secondly, I love a card back with piles of career stats. And Fleer even had room for a one-sentence bio, even if it squished it in under the photo.

John Bateman said…
I loved the feel of those matte cards - I wish Topps would try this with their base set
August 3, 2010 at 7:35 PM

madding said…
I loved their idea, but I continue to be astonished whenever I pick these cards up. They're paper thin. They feel even more thin than 1981 Donruss, but maybe that's just my eyes deceiving me. They just strike me as something you could cut out of a magazine.
August 4, 2010 at 1:25 AM