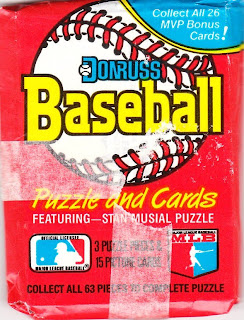 Mark of Stats on the Back has been sending out cards lately. I'm too dumb to figure out what I need to send him in return. So I dig up some Mets, write a note of apology for my stupidity, and mail them off. I figure, he's a teacher, he's used to lame excuses. Just think of me as one of your students. You know, the one who cowers in the back. The poor kid doesn't even know what "cowers" means, but he does it very well.

Anyway, Mark found a way to get even. Included with the cool cards that he sent was this ratty old pack of 1988 Donruss. It was being used as packing material. But it was also unopened. Sealed shut. And you know what that means, don't you? Yes, I was about to lose my 1988 Donruss virginity.

I have never opened a pack of 1988 Donruss in my life.

Pick your mouth up off the ground. That's rude.

I was in college in 1988. It wasn't a peak collecting time. A couple of packs of Topps. That was it.

Years and years later, during my collecting hiatus, I walked into a collectibles shop. Amid the usual dustables was a box of random cards. I've mentioned this before. Most of it was '88 Donruss. Even though I wasn't collecting, I sensed an opportunity and grabbed all the stars I could find. What the hell, they were about 5 cents apiece anyway.

So, aside from the Dodgers team set, I've seen very few common '88 Donruss cards, and have never pulled any from a pack. Many thanks for the opportunity, Mark. Here is what I pulled:

My goodness. That's a lot of commons. In fact, that was the crappiest pack I've ever opened. Why were people buying this stuff? Concepcion is the star of the pack. Easily. Don't hand me that "but, Kruk ..." line. All I see are commons.

Well, that's not entirely true. This was the star of the pack: 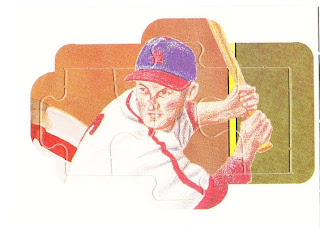 That was my guaranteed Stan Musial puzzle piece. That's the best puzzle piece you could get. Much better than a leg or dead space. It's practically a card in itself.

Anyway, all of this junk wax opening reminded me that I've always been stumped as to the inspiration behind the 1988 Donruss design. 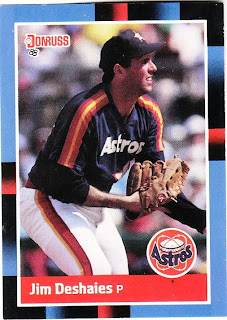 It has a very '80s computer feel, but I've repressed every memory I have about computers in the 1980s (too many failing grades in programming class), so I don't remember what this is supposed to be.

Does anyone know a good name for this design? Maybe it's not even computer-inspired. But it's got to be patterned after something.

While we're at it, how about a name for this design? 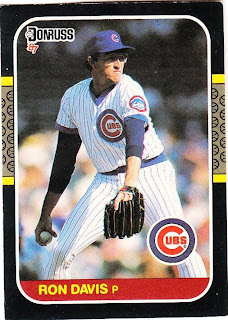 Everyone loves this set. It's lost on me. But since so many people like 1987 Donruss, I'm hoping someone has a good name for it. 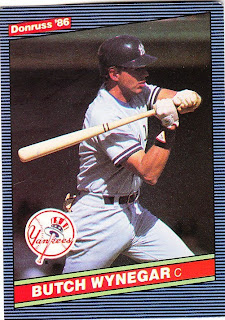 How about 1986 Donruss? My least favorite design of the '80s. If it's all right with everyone, I am taking Bo's suggestion and calling it the "Max Headroom" set. 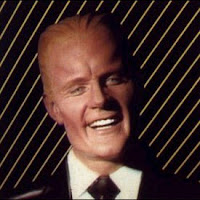 It makes me dislike 1986 Donruss less. And it certainly fits with the time period. Who didn't love Max Headroom? For 15 minutes anyway.

Also, to jump out of the junk wax era for a minute, I am going to name another lousy Donruss set. 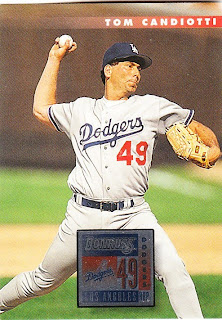 I was inspired by the recent post at A Pack to Be Named Later. Like I said over there, Donruss has the honor of winning the prize for "Worst Positioned Logo Ever." On about 50 percent of the cards, it looks like Donruss is censoring a player's groin. I don't know why this didn't go through the head of anyone creating the set. It's just a disaster.

So, I'm calling this the "Metallic Loin Cloth" set.

If you have a better name, feel free to shout it out. But I have a hard time believing anyone will get me to change the name, because the terrible logo placement is all I can see.

Mostly, what I am looking for are names for the 1987 and 1988 Donruss sets. And if you come up with something I use, then I'll find some cards for you. Maybe I'll go down to the card shop I vowed not to go into again and grab some late '90s/early '00s packs for you. That might be fun. For 15 minutes anyway.

Oh, I almost forgot, Mark sent me some cool cards, too. Here they are: 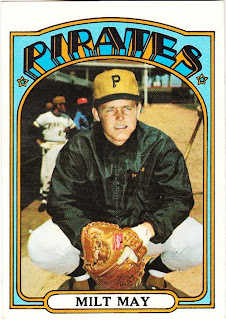 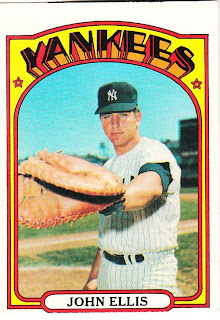 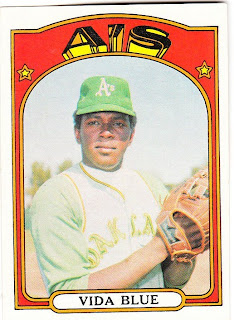 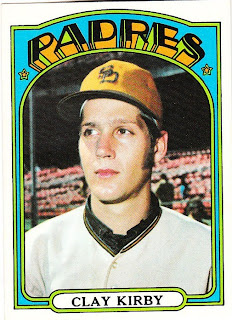 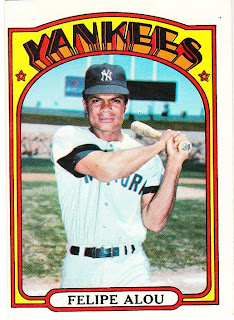 Some 1972 Topps set needs -- one of the best sets ever. I saved the Alou card for last to let you know that he is posing on A MAJOR LEAGUE FIELD!!!! That is the Oakland A's stadium! Wow. I think they had a rabbit problem in 1971. 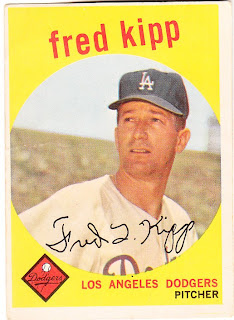 Mark also sent me a 1966 Bob Miller card that I forgot to scan, and this great 1959 Topps card of Fred Kipp, who pitched in 40 games in 1958, but only 7 other games the rest of his major league career.

The Dodgers' team set for 1959 is massive, as it is for most of the teams. I'll be collecting that one a while.

Oh, and here's the back of the card: 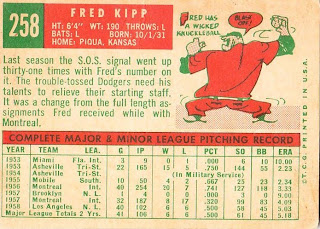 I always feel guilty when I post cards from Mark and don't post a card back. Plus, the cartoon is fantastic and it keeps my mind off the text on the left, which refers to "the trouble-tossed Dodgers." Who won the World Series the next year, Topps? WHO? You can toss your troubles you know where.

OK, that's it. If you have design name ideas, leave them in the comments. Thank you graciously.

Ben G said…
87D has always looked like it was run over by a tire with baseball treads.

Steve78 said…
88d almost looks like lasers, red lasers and blue lasers. Maybe I'm just thinking lasers because I just got a new laser kitty toy that I can't seem to put down. So, 88D: The Kitty Laser set. Or just The Laser Set.
August 11, 2010 at 8:45 PM

steelehere said…
The colors on the corners of 88D look like the range of colors found in the "Color Picker" in Adobe Photoshop and like programs.
August 11, 2010 at 9:20 PM

mmosley said…
That 1988 Donruss pack was no ratty old pack. It was fresh out of an unopened box! And if you don't straighten up, I'll send you a whole box.

John Bateman said…
1988 - Most over produced baseball card set in the world. I remember buying these at a Grocery SuperMarket that had a big display for 3 packs for a dollar back in 1988. The display was about 5 feet tall and held hundreds of packs. I have never seen a display that huge before or since.

dayf said…
1987 Topps will always be the Little Gray Baseballs set to me.

I never really thought about 1988 Donruss more than I had to, but how about the Tron set?

Community Gum said…
The above CG comment was from Andy, here's my crack at it:

87 D - I agree on tire tread
88 D - the Future Checkers set. It looks like someone zoomed in on a horrible computer generated checkered graphic and we're seeing how people will be Robo-kinged way out in 2013.
86 D - no question it's the Max Headroom set
96D - my first thought was the Crotch Stamp set, but I like yours too

AdamE said…
In my brain there are two sets called striped sets. One is the 88 Fleer and the other is 86 Donruss so reguardless of what you label them they are and will forever be "Striped Fleer" and "Striped Donruss" sets.

87 Donruss is the tire set.

Doc said…
Even before I scrolled down, my immediate reaction to 86D was Max Headroom... So, you got my vote for that one.

As for the 88D, I'm going with The Tron Set. Those bars remind me of the racing motorcycles...

Kevin said…
88 Donruss reminds me of the laser backgrounds we had for our yearbook pictures in grade school. I don't think I can top Tron, but my suggestion is Laser Photo Day.

It's funny you mention the A's having a rabbit problem. When they played in KC, Charlie Finley installed a mechanical rabbit behind home plate to deliver new balls to the umpire. His name was Harvey. Harvey followed the team to Oakland but was dropped after 1969.
August 12, 2010 at 8:21 AM

Ryan H said…
88 Donruss: The Laser Tag Set. I don't know why it reminds me of Laser Tag.