A million years ago 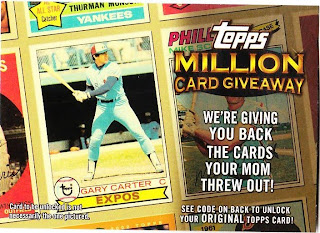 First off, I decided I will be freeing my 1957 Topps "Dodgers Sluggers" card. But I have to say, y'all take the fun out of everything. Pliers? Razors? Consulting a "how-to" video? I want to SMASH things!

But maybe, just this once, I'll be a little more careful and put the hammer aside. But only for Skoonj, Gil, Campy and Duke.

Seemingly a million years ago, everyone went great googily moogily for Topps' Million Card Giveaway. Yours truly included. But I haven't thought about it for months. I used to check it daily. For a long time. Then I'd check it weekly. Then monthly.

I feel bad about this because I used to berate people who wouldn't check the site when I had a trade offer out for them. And then I go and do the same thing. I'm such a jerk.

But I still think the site is cool, and I still think it's fun. And I'm not mad that Topps turned it into a Stephen Strasburg carnival game. And I still can't get too worked up over the shipping thing. Fun is fun. It heals all wounds.

So I returned to the site again last night. For the first time in about a million more years, I actually had a couple codes to redeem. For a long time I had given my codes away to Steve, to whom I had traded them in exchange for a 1971 Thurman Munson card. But that transaction has finally expired, so I was free to gamble again.

Yesterday, I bought 2 packs of Series 2 Topps, and wouldn't you know, I got a code card in each pack (I also pulled 2 of the 9 cards I needed to finish off the set. Now that is success, children).

So, all giddy, as if it was February again, I logged onto the site and immediately checked the recent cards redeemed. There were two 1980s cards, but the rest were mid-1950s through 1975. I could deal with that. So I prepared to take the plunge. But first, I had to take a screen shot, since dufus here finally figured out how to do that. 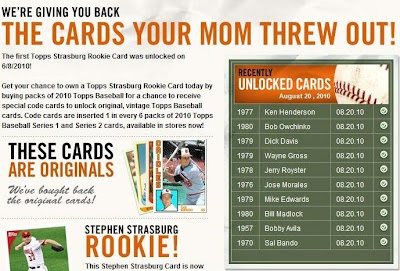 In the time that it took for me to save the screen image, the recently unlocked cards list had changed -- to virtually all late 1970s cards. That meant if I redeemed my code then, I'd have about a 70 percent chance of redeeming a card I already had.

So I waited. And waited.

After a few hours, I captured another screen image: 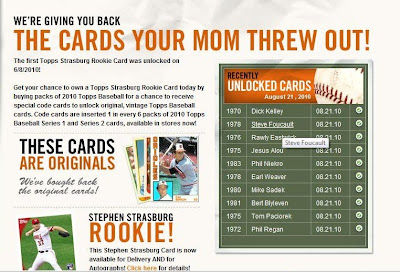 All right, there were still too many late '70s/early '80s cards (including Steve Foucault, whose name I had inadvertently clicked on when I captured the screen).

But I couldn't wait any longer.

I typed in the Gary Carter code card and I prayed it wasn't another Scott Garrelts card. 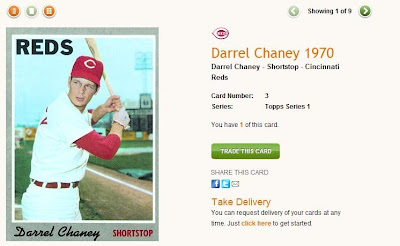 Awesome. 1970. The chances of me already having a card from 1970 are almost zero. I was very pleased to see Mr. Chaney. Although not as pleased as if I had received this card: 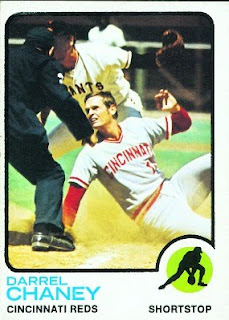 But I can always order up that one.

OK, so then I debated using the other code card. 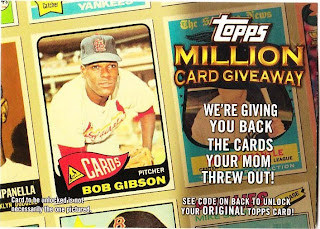 There was an even better chance of getting another 1980 Tony Brizzolara card this time around. But I convinced myself that Bob Gibson would never let that happen.

I felt myself tap away at the keyboard and out popped: 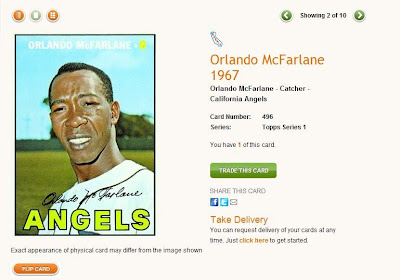 Fantastic! A card from 1967 -- possibly my most favorite set of the '60s, and it's a guy I never heard of, which means I get to figure out who the heck he is! Woo-hoo!

Apparently, McFarlane has just three cards and this is his final one. According to his wiki page, McFarlane was the first player to get married on a baseball field. He died in 2007.

Well, to me this was a smashingly successful return to the long-neglected MCG site.

It may not be a big deal to those who have like 200 cards in their portfolio, but to someone who couldn't play on the MCS site for months and to someone who got nothing but Scott Garrelts cards when he did, this is welcome news for me.

(Someone just offered me four 1974 cards for the McFarlane card. Normally, I'd sign off on that trade instantly, but I've completed the '74 set).

It will be awhile before I ask for any more of my cards to be shipped, but I'll certainly get them sent to me. Fun is fun.

John Sharp said…
I redeemed several cards, and have traded most of them for Tigers players, including a 1970 and 1972 Bill Freehan, which I have received from Topps...Very Coll stuff.
August 21, 2010 at 5:07 PM

Play at the Plate said…
I'm still trying to trade away many of the 71 cards in my profile...making big multiple card offers for stuff I might actually want to pay to get shipped.
August 23, 2010 at 2:16 AM