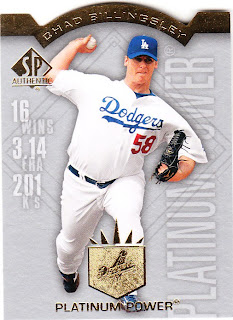 There are a lot of things wrong with the Dodgers these days. But one of them hasn't been the starting pitching.

In fact, since the addition of Ted Lilly to the rotation, I haven't worried about my team's starters in the least.

Well, I do worry that they will go into the bullpen with an Uzi after a useless reliever puked on their victory for the bazillionth time.

But other than that I am pretty happy with Kershaw, Billingsley, Kuroda, Lilly and Padilla. I wouldn't mind seeing them all back again next year.

Plus, lately I've been blessed with some great cards of one particular member of the starting rotation. In fact, I didn't even notice the connection between the three cards until about 10 minutes ago.

All within the last couple of weeks someone has sent me: 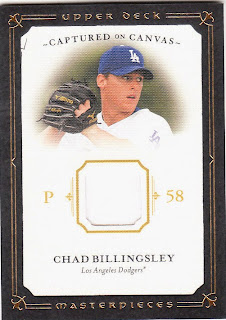 Billingsley as a solo act. 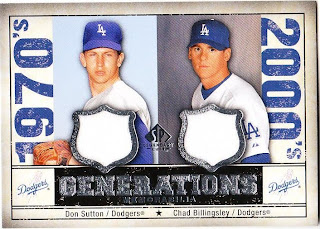 Billingsley as part of a duo. 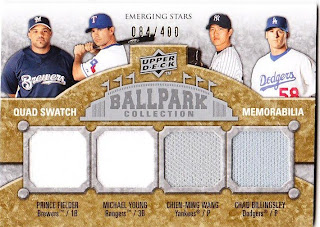 And Billingsley as part of a group.

I still think Billingsley is going to become one of the best Dodger starters I've ever seen. He can be frustrating, but he seems to have snapped out of whatever was going on with him early in the season.

And now that the number of my Billingsley relics is starting to catch up to the numbers I have for Cey, Kershaw and Kemp, I hope he remains in Dodger blue for a long time and only continues to get better and better.

In fact, I think Billingsley should stand a little father away from Chien-Ming Wang on that Ballpark Collection card. He doesn't need to catch "career-ending disease" from him.