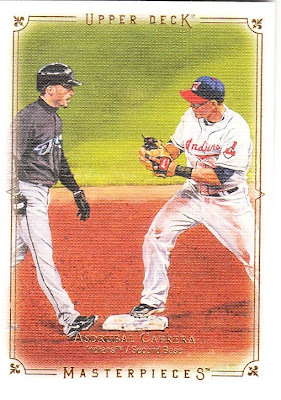 This is a night card of Asdrubal Cabrera's unassisted triple play on May 12, 2008. That is Cabrera stepping on second base to force out Kevin Mench (not seen), and preparing to tag out Marco Scutaro, who is already resigned to the triple play and walking back to the dugout.

The 14th unassisted triple play in MLB history happened in the second game of a doubleheader at Cleveland. The Blue Jays ended up winning the game 3-0 with three runs in the 10th inning.

I pulled this card after I was snookered into a buying a couple of discounted blasters at Wal-Mart the other day. I kept reading about how Wal-Mart had suddenly packed its card aisle with marked-down blasters -- good ones, not 2007 Upper Deck base.

I'm a sucker for discount blasters.

Back at the start of the year, I vowed not to buy any blasters. But that devolved into "I won't buy a blaster unless there is an overriding good reason to buy a blaster." "Discount" qualifies as an overriding reason. So does "the name Allen & Ginter is on the box," "there might be a Strasburg inside (the month of June only)," and "there's nothing else better to buy."

Turns out I wasn't so nifty.

The Masterpieces box yielded exactly four cards that I needed. And that's only because I previously traded three of the cards away after I pulled them. The lone card out of the whole box that I've never pulled: 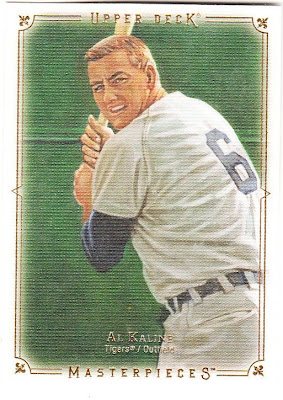 Kaline cards are good. Although I wish they'd find a picture taken when he was wearing a cap.

The Baseball Heroes box was only slightly more interesting. I've never been a fan of the Heroes set. I think the cards are boring. I mentioned that long ago, and the only reason I even think to buy them is because of the pretty parallels. Oh, and because it was the cheapest box on the shelf.

As I shuffled through card after card of achingly boring brown-bag backgrounds, yawning through the whole thing, I wondered how on earth did anyone buy this when the blasters were regular price? Even at $8.98 I felt I was getting ripped off.

The only highlights in the box. And I mean only: 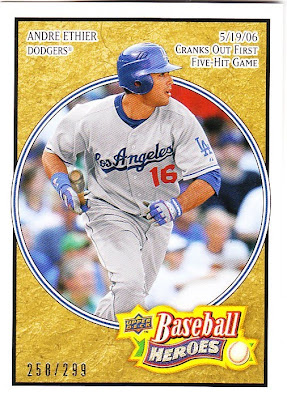 Andre Ethier gold parallel. Heh. I have this card already. Well, not No. 258, but I don't want to be THAT guy. 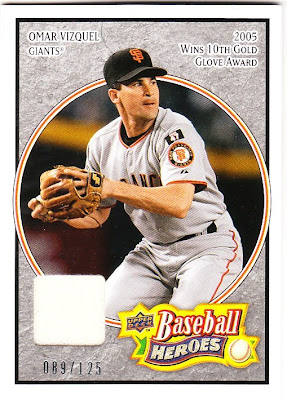 Omar Vizquel relic. Ooh, a jersey card of a Giant. Pinch me. At least it's not a player I despise.

So, I don't know how you guys who also found recently discounted blasters are pulling all kinds of dandy stuff from what you bought.

Then again, I did get the night card.

Maybe I should have named the blog "Autographs of Superstars and Hall of Famers."

Nachos Grande said…
It could be worse - my Wal*Mart doesn't have any discounted blasters...and they recently moved the entire card section to the END of a shelf in the toy section. They have room for about 15-20 blasters total...and about half of those are 2010 Upper Deck crappy blasters.
August 22, 2010 at 2:45 PM

Paul Hadsall said…
Thanks for reminding me why I don't buy blasters. I've been wanting to open cards recently, and I've been close to giving in to the temptation.
August 22, 2010 at 10:46 PM