'56 of the month: Curt Simmons 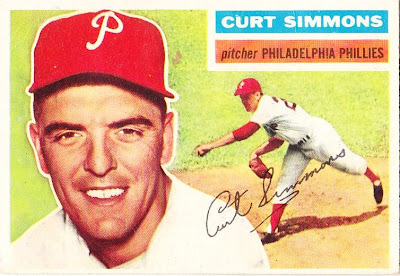 As fantastic of a card as it is, I didn't receive "just" a 1955 Jackie Robinson card from Phungo headquarters.

Oh, no, there were other goodies, too.

I've always had a mild interest in the Phillies players of yore. Robin Roberts, Richie Ashburn, Chris Short, Dick Allen, Curt Simmons. I think it's because the Phillies are my Plan B team and basically have been since the very first year I collected cards.

But there was a little extra intrigue with Simmons. That's because at a card show around 1980 or so, I landed a 1962 card of Simmons. He was a not a Phillie by that point, but the card was absolutely free. It came out of one of those card gumball machines. Do you remember those? The only time I saw them were at card shows. You deposited your money -- I don't remember how much, it wasn't a lot -- and out popped a vintagey card.

On that particular trip to the card gumball machine, my prize was a miscut Simmons in a Cardinals uniform. It was the first 1962 card I had owned. It looked rather ancient.

Although not familiar with Curt at the time, I knew the name Simmons. I knew Ted Simmons, the Cardinals all-star catcher. And I had read about Al Simmons, of the great Philadelphia A's teams of the 1920s and '30s. I thought Curt Simmons must be the link in the middle. I assumed they were all related and what a great Simmons dynasty they had built in baseball!!!! How come nobody was writing stories about this?

Well, that's because, sadly, they're not related. So much for the Simmons dynasty.

Anyway, I don't have that card anymore. I think I shipped it off to madding, or someone.

That means I've gone without a Simmons card for too long. And it means this card is quite welcome.

Simmons, as you may know, was a member of the 1950 Philadelphia Whiz Kids team. In fact, he's one of only five surviving members of that team after the recent death of Roberts. Simmons played nearly 20 years in the major leagues, beginning as an 18-year-old. He impressed Philadelphia as a high school kid, nearly leading an all-star team of high school players to a victory over the Phillies in an exhibition game in 1947. He was in the major leagues that same year.

Simmons did not appear in the World Series against the Yankees in 1950, possibly the reason the Yankees had it so easy in that Series. Simmons was called into active duty during the Korean War late in the season. He was granted leave for the Series, but not as a player. Still, he wanted to show up to root on his teammates, and he was there to see them get swept.

But later Simmons would get his revenge. As a member of the Cardinals in 1964, he helped St. Louis to the Series and the Cardinals beat the Yankees. Now that is sweet. 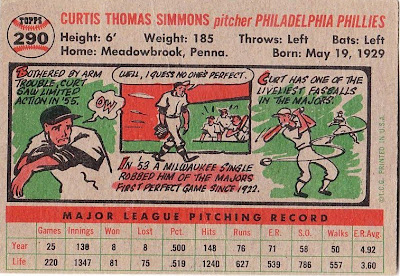 Simmons was a successful pitcher for two of my favorite National League teams, the Phillies and Cardinals. And he was left-handed. So there were a lot of reasons for me to root for him -- even if he retired when I was around 2 years old.
Fifth all-time in victories in Phillies franchise history, Simmons is still going at age 81. He lives in Pennsylvania and runs a golf course.
Many thanks to Phungo for this card, the Jackie card, and THESE fine cards: 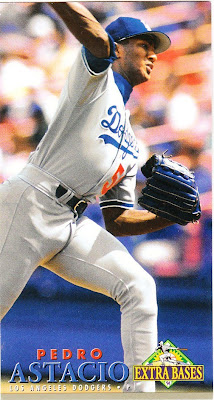 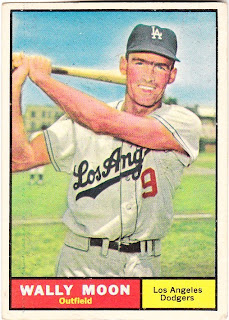 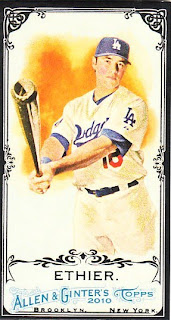 That's quite an eclectic mix, isn't it?

He also sent this: 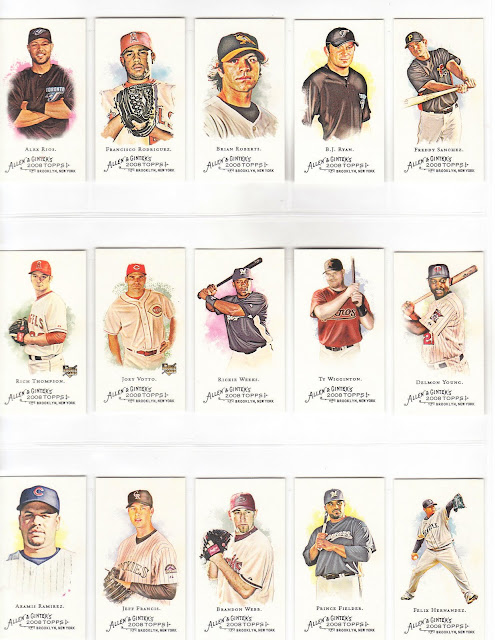 No, not the minis. He sent pages to fit the minis!!!!! Woo-hooooooooooo! I really drag my butt on getting pages, especially these kind, since I have to order them online and I have a mental block when it comes to ordering pages/binders/yawn-oh-gracious-they're-so-boring through the mail.

But I'm not telling anybody anything they don't know: these pages make the minis look great. It makes you want to collect nothing but minis.

I also received one other 1956 card from Phungo. But that card requires some definite research. Maybe of the investigative kind. If I don't get too lazy.

Kevin said…
When I was younger, the hobby shop nearest my house had one of those vending machines. I only remember buying from the machine once, but oddly enough I can still recall some of the cards that were dispensed: 1987 Topps Hal McRae, 1985 Topps Jerry Willard, and a ProCards minor league card of Gil Heredia with the Phoenix Firebirds. My memory cells work in odd and random ways.

There was also a vending machine at Lackawanna County Stadium, and that one I patronized nearly every time I went to a Scranton/Wilkes-Barre Red Barons game on my family's vacations. For years it was stocked with 1992 Fleer, 1991 Upper Deck, 1993 Classic minor leagues, and the like. The last time I remember seeing that machine was probably 3 or 4 years ago. At that time I pulled some 2005 Donruss and early 2000s Diamond Kings from it.
August 25, 2010 at 8:33 AM