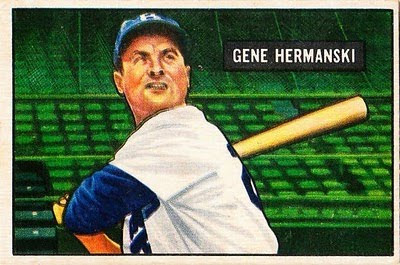 I am conflicted about death.

Oh, don't get me wrong. I think it's generally a negative. I'm not inviting it over to the house for crackers and tea or taking a bus tour to funeral homes.

It's just that when death happens in baseball, opportunity follows.

Last month, Billy Loes died. He's a former Brooklyn Dodger, who pitched during the team's 1950s heyday. I had read about him in several books over the years, but just about everything I had learned had evaporated from my memory. The only thing that remained was that he was a Dodger, he pitched in the '50s, and he was kind of goofy. 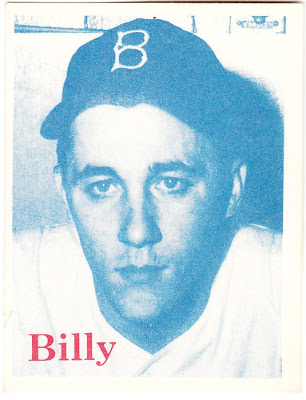 But upon Loes' death, I had the chance to rediscover him. And what I found out was that Loes wasn't necessarily goofy. He was honest. Loes said what was on his mind, and I always appreciate that.

When Loes was asked about being a 20-game winner, he said he didn't want to be one: "because then I'd be expected to do it every year." That quote has a definite slacker vibe, but Loes was smart enough to know what expectations can do to a man. Besides, on a team like his, winning 14 or 15 was plenty.

There were other stories, about Loes predicting that the Yankees would beat his Dodgers in the '52 World Series in 6 games, then saying he was misquoted -- he predicted the Yankees would win in 7. (And they did). He claimed he lost a ground ball "in the sun" during his Game 6 appearance. A teammate confirmed that was indeed possible with the way the sun reflected between the two decks at a certain time of day.

So in life, I knew Loes as goofy. But in death, I know him as honest. 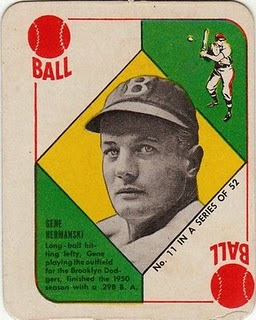 Today, while looking up some information for a fellow blogger, I stumbled across the death of another Brooklyn Dodger.

Does the memoriam list on the baseball-reference.com page bum anyone else out? I was about to dig up some happy research information when I was sideswiped by the news of Gene Hermanski. Dead at age 90.

Now, what I knew about Hermanski in life wasn't much. I knew he was an outfielder for Brooklyn in the late 1940s, and he was traded to the Cubs for Andy Pafko just before the Dodgers' 1950s run of World Series appearances.

I knew that I had just picked up his 1951 Bowman card two weeks ago and the thought of buying the card just before his death kind of freaked me out.

But in death there was another opportunity. Today, I found out that he was one of the few players who went to shake Jackie Robinson's hand when Robinson played his first game for the Dodgers in 1947 (Ralph Branca was another).

Hermanski, who started in the outfield in that game, also suggested that everyone on the Dodgers wear Robinson's number, 42, to confuse the rumored snipers in the ballpark looking to take out Robinson.

I'm even prouder to own Hermanski's card now.

Next to Hermanski's name on the memoriam list was another name that jogged a memory. The name was Keith Drumright.

I clicked on his name and viewed he stats. A brief call-up with the Astros in 1978 and a little more than half of a season with the Oakland A's in 1981. I immediately went to the baseball card collection. 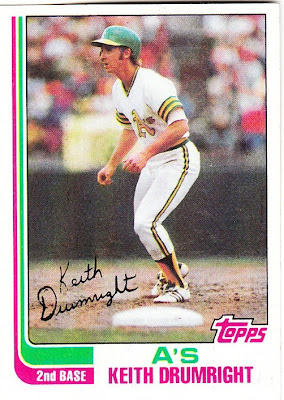 There was his card. 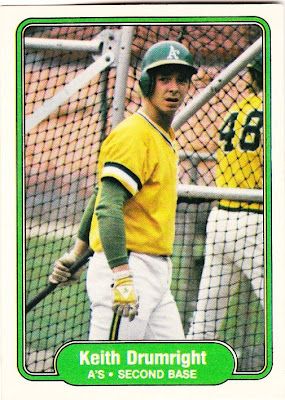 And there was another.

Two cards. That was all. But both burned in my memory enough that the mention of the name stirred the catalog in my brain.

Hmmm ... Drumright never played in the majors past '81. And 55 seemed too young to die.

With my hands practically over my eyes, I pressed on.

"... died of a self-inflicted gunshot wound."

Left behind a girlfriend, two daughters and six grandchildren. "A quiet, hard-working ballplayer who always came to the ballpark in a good mood," said his obit.

So, there's the conflict. As a writer and seeker of information, sometimes death opens up a new world about someone you never knew. And sometimes it just makes you want to chuck your computer, your TV and live in the woods somewhere.

Sorry if I brought you down. It was baseball-reference's fault.

Didn't you buy Steinbrenner's card about a month ago?

N. Diunte said…
If people want to see the original article where he is quoting about Hermanski, check here:

Play at the Plate said…
Until three years ago, death was something that happened to other people. Then I lost my father-in-law and father to cancer 6 months apart. It gave me a new appreciation for how limited our time is here. Whether you live to be 25, 55 or 90, it all goes by too fast. I'm 7 days away from my 40th birthday and it is really hitting home with me this week. Great post Greg.
August 11, 2010 at 1:19 AM