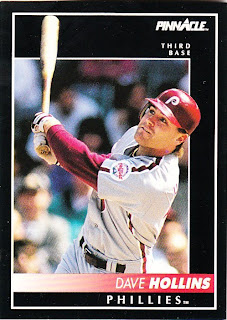 For a long time, only the Raiders knew this. They were the only sports team that featured black as a primary uniform color. But eventually other teams, like the Pirates, Penguins and Giants, began to display black more prominently. Then expansion teams like the Rockies, Marlins, Jaguars and Panthers, made black part of their color scheme from the very start.

Soon, established teams like the Reds, Mets, Blue Jays and Royals adopted black for the first time in their history, and there was no going back. Black was here to stay.

So it was with sports cards. 1971 Topps was a breakthrough. 1986 Topps less so, but still very noticeable. But no one dared to use black prominently on the BACK until 1992 Pinnacle. 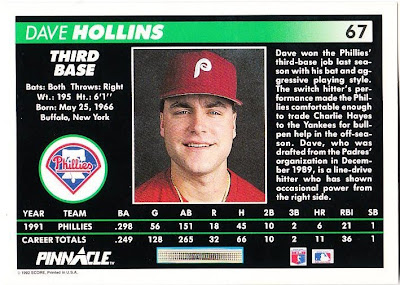 As someone who enjoys night cards, gravitates toward the night hours and night time events, this was one of the coolest happenings in all of cards. This was Pinnacle's debut, and it made an impact right away.
I loved the backs. They featured a colorful display on a pitch-black background. I'm a sucker for that. 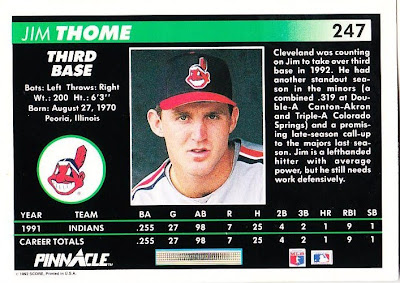 Even though "white-on-black" type is a no-no in printing for a lot of mediums because it often can be unreadable (re: the first incarnation of "Night Owl Cards"), it wasn't a problem with these cards, at least for me. The elements on the card are arranged well. I like the prominent team logo, and the mug shot is always a plus, and centered well.
The bio write-up is very straightforward. Some of them are downright negative, stressing how much a player's team stinks or all of the injuries a player went through. And I'm not happy about a single line of stats. But that was the thing to do in the early 1990s. Thanks, Upper Deck.
Also, I never quite understood what that tire-tread thing was at the bottom of the card. I'm guessing it was an anti-counterfeit device, inspired by UD's hologram. 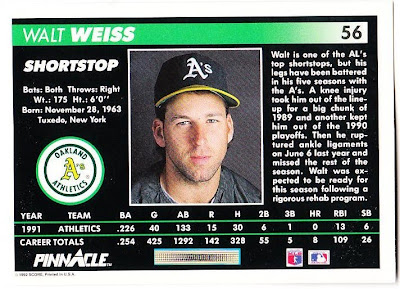 The standard color on the back of the card, besides black (yes, I know, "black is not a color; it's the absence of color" -- whatever) is green. It doesn't exactly go with any team unless the player is with the Oakland A's, and then it works quite well.

Today, black is everywhere on cards. Front, back, sideways. But it was something different in '92.
Best of the set: 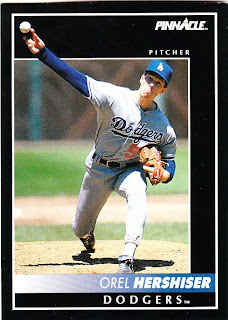 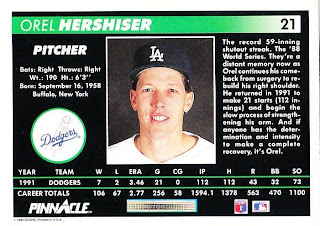 madding said…
The Portland Trail Blazers went to predominantly black road uniforms around 1987 or so and have done so ever since (after flirting with them for a time in the '70s.)
August 10, 2010 at 1:27 PM

Anonymous said…
Didn't that tire stripe require some sort of red-lensed glasses to view properly? I may be misremembering that, but yeah, they were basically an anti-counterfeit measure. Loving this series.
August 10, 2010 at 3:52 PM

Community Gum said…
I loved these card backs so much that I decided to do a series of 26 drawings based on them. I picked the best player I had from each team and tried to draw their portrait from the back. I think I only did Dawson and Ripken before I gave up, but this was a serious project for me. I loved these cards big time. -Andy
August 11, 2010 at 8:33 AM