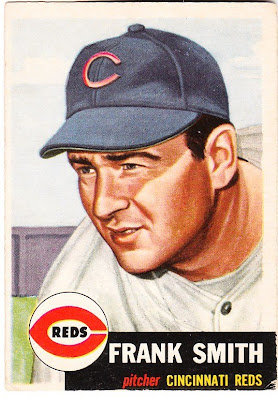 Here is my 1953 Topps Frank Smith card. Frank, if you remember my story about him, was a former baseball reliever for the Reds and the Cardinals. I interviewed him three or four times. But I'd hardly call them interviews. They were more like conversations. He was a great guy who told me great stories about himself and the 1950s. When he died almost five years ago, I felt like I lost a friend.

This is the only Frank Smith card that I have that is not autographed by Frank. That's because I just obtained it a couple of weeks ago.

It came in my very first three-blogger trade. I feel like a general manager now! Travis P. of PunkRockPaint redeemed this card in the Million Card Giveaway thingy. He then traded it to fellow Padre fan, Doc T at Baseball Card Recollections. And then Doc T traded it to me.

How about that? Trading with two Padres fans. You do what you've got to do to get one of your baseball heroes.

I held off on posting this card until I had cards ready to send to Doc T. They have officially hit the mail, so it's time to talk about Frank.

Unfortunately, I said a lot of what I know about him already. It was kind of an involved post. But I do have some leftover notes from the conversations that we had. So I'll just provide some snippets that I hadn't mentioned (some I probably left out of the original story that went in the paper). Hopefully, some of them will be interesting:

Frank Smith was originally signed by the Cubs at a tryout camp in 1946 in Gloversville, N.Y. He was the only guy signed out of what he estimated was 23 players in that camp. Frank said:

"Years later, I asked (the scout) why. They asked me to pitch. I think I threw 12 pitches to the catcher. He caught maybe 3 or 4. The rest went into the screen. I went and took a shower and said, 'Oh God, that's the end of me.' Then there's a big booming voice calling my name. Years later, I said, 'How the hell do you guys sign me?' And (the scout) laughed. He said, 'Well, Frank, we couldn't see the ball.'"

On deciding to be a pro baseball player:

Frank was selected by the Reds from the Cubs in the 1948 minor league draft. He was summoned to the office of the Reds general manager, who at the time was future N.L. president Warren Giles. Frank said:

On starting out in the minors:

"My first pro job in the minors, I made $25 a week with Statesville, N.C. I roomed with four other guys. We paid our rent. My mom used to send homemade cookies. You didn't give any of it a thought. You just wanted to play baseball. You had a love for the game. You'd see the bleachers full, hotter than hell, and the place is packed."

On guys he played with in the majors:

Frank was a friendly sort, but his best buddies were Andy Seminick, a catcher with the Phillies and Reds, as well as former roommate Vic Raschi, and good friends Ken Boyer and Harvey Haddix. He said Boyer came from "a good family," was "a hell of a third baseman," and that he attended Boyer's funeral when he died too young. Of Haddix, Frank said:

"Harvey was just a hell of a pitcher for 165 pounds. Harvey was a little boy from the farm from Springfield, Ohio. But he had a grin on his face all the time."

At the time of my first interview with Frank, Mark McGwire was with the Cardinals. McGwire wore No. 25, Frank's old number with St. Louis. Frank said:

"He got my number. That's all he got from me. He sure didn't get no hitting."

On his Jackie Robinson bat:

Frank collected baseball memorabilia from his days as a big league player. One of the items was a broken bat used by Jackie Robinson. It was a bat Robinson used in an at-bat against Frank. He kept it in a closet for years after his retirement. Frank said:

"That's pretty valuable, I would imagine. ... The bat was split. The bat boys said, "what do I do with a cracked bat?' I thought I'd take it home, let one of my kids play with it. And it's his bat, with his signature."

Frank was in the minor leagues at Columbia, S.C., in 1948 and was headed back home. But he heard that Babe Ruth was going to be at Yankee Stadium to make his famous farewell speech and took a detour. Frank said:

"Going home through New York, I hear Babe Ruth is going to be at the Stadium. I had never been at Yankee Stadium. That's where I see the Babe make his farewell speech. I was in the upper deck staring right down at him."

Frank said the best left-handed hitter he ever saw was Ted Williams. Second on that list was Stan Musial, who he faced often, but became teammates with when he was traded to the Cardinals before the 1955 season. Frank said:

"I used to throw the ball to Stan and hit the black part of the plate, and he never flinched. After I got traded, I asked him, 'When you batted against me, you never looked at my face and  always stared at my feet.' He said that between me and him he had an imaginary window frame. When the ball come through the frame, he went to swing at it. If it missed the frame, he wouldn't swing at it. Isn't that a hell of a theory on hitting?"

On his love for baseball:

Frank believed that baseball was the greatest game. He had season tickets to Florida State football games and didn't miss a game in seven years. But baseball was his love. Frank would run baseball camps all over the southeast, as well as attend other athletes' camps. During his camp, he would end it with a speech. Frank said:

"It's still the great game, the national pastime. A lot of times I talk at the end of camp. I say, you think of any sport you want to -- baseball, football, basketball. What do the players do after the game -- what does Dan Marino do, what does Michael Jordan do? You see them with a baseball hat on. It's the greatest game out there."

Thanks for the card, Doc and PRP. Now you know why I wanted it so bad.