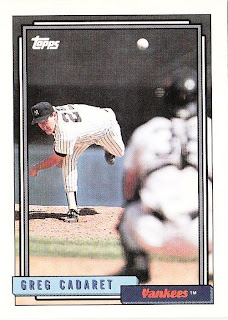 In 1992, Topps began to wake up to the changing trading card world around them. After a few years of continuing to issue the same cardboard product that it had always produced -- just because it was TOPPS and Topps didn't NEED to change -- it realized it needed to change.

Upper Deck was attracting a whole new kind of collector, and it was receiving all kinds of praise for the look of its cards. Even Fleer, Donruss and Score were attempting to keep up with the changing collecting habits. And Topps was left alone in the corner, sniveling all over it's gray cardboard stock.

The pictures weren't of players, like other card companies had done, and they weren't sharp and candid, like Upper Deck's. But, hey, Topps was trying, so it came up with this: 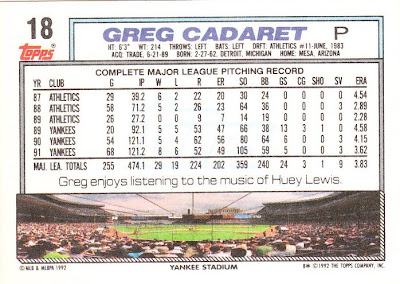 (Yes, I picked this particular card because "Greg enjoys listening to the music of Huey Lewis." Who doesn't enjoy a rousing karaoke session of "Hip To Be Square"?)

I love stadium pictures. I know I'm not the only one. And there is at least one other set on this countdown that uses stadium photos.

Topps' use of stadium pictures isn't perfect. The photos aren't all that clear. They're rather tiny. They don't appear on every card. But the concept is cool. Match up a player's team with the stadium in which they work? And make the photos panoramic? That's a nice idea. 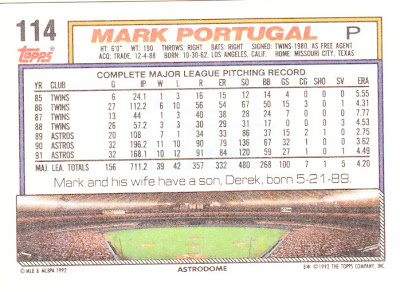 I'm not sure where Topps obtained the photos. This was before wikipedia, so it's not like it could be lazy and steal it from a website. But there isn't consistency in the types of pictures. Some feature the inside of the stadium, like the Astrodome. 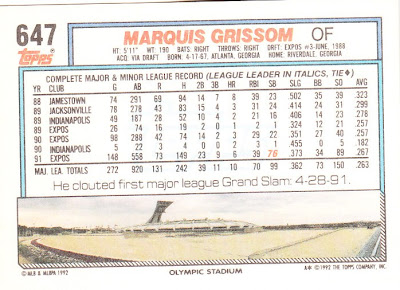 And some feature the outside of the stadium, sometimes from about 3 miles away, as it appears in this photo of Olympic Stadium.

But all in all, I think it's a nice idea, and at least it showed that Topps was trying to keep with the times. Was it a case of Joe Morgan acknowledging the benefits of OPS? No, nothing that huge. But it was certainly something different.

Some people wish we never turned away from gray cardboard stock. I feel like that periodically. But before I start getting cranky, how about a look at all of the stadium photos from that set?

It doesn't seem like 1992 was that long ago, but out of those 26 stadiums only seven are still used for MLB games, if they even exist at all. Also, there are four more teams in MLB now -- five if you count the Expos' conversion to the Nationals. 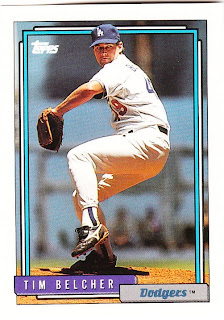 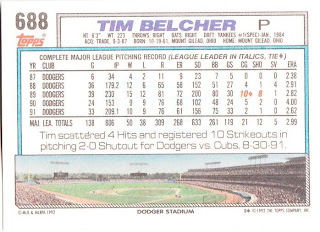 SpastikMooss said…
Thanks for putting all of the stadiums in one big long post. The effect is very cool, and it's a nice tribute to the set.
August 31, 2010 at 10:34 PM

Bravos3110 said…
You really put into perspective about how many stadiums are still used today. I never really thought about that.
August 31, 2010 at 11:51 PM

Mad Guru said…
Neat post and I enjoyed seeing all the pictures. Also liked that you posted the pictures in alphabetical order by team nickname with the A's being second. I stored my cards that way as a kid.
September 1, 2010 at 7:55 AM

Charles @ Hoopography said…
Wow, thanks for showing all those stadiums, that was fun to look at. I can't believe most of those stadiums are gone today.

Jeffrey Wolfe said…
The '92 set was Topps last hurrah. I loved the backs they were so clean and easy to read both the card numbers and the stats.
September 1, 2010 at 1:20 PM

Anonymous said…
Topps changing was the worst thing that ever happened to cards and the death-nail in the hobby's coffin.

Cards were in trouble when you could no longer buy Topps between to the fun-dip and licorice ropes at most little league snack bars.
June 23, 2011 at 4:58 PM