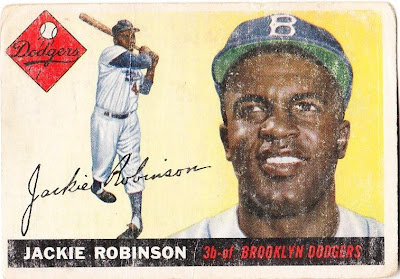 As a Dodger fan, a fan of Dodger history, and a card collector, obtaining this card is a significant moment in my collecting life. It is the first time that I have owned a Jackie Robinson card that was produced during his playing career.

I've said before that not having a Robinson card from the '40s or '50s was the Achilles Heel of my card collection. The hole in my collecting heart. Now that hole has been filled.

I owe the opportunity to own a 1955 Topps Jackie Robinson card to deal of the fine Phungo blog. No, he didn't feel sorry for me because the Phillies seem to beat the Dodgers in the most painful ways possible. But he did feel enough for a fellow collector to offer up this Robinson card.

It didn't cost me much at all. In fact a few other cards came with it -- I'll show those some other time.

The card is a well-worn specimen, as almost all 1955 Topps cards should be. I am suspicious of 1950s cards that look like they came directly from a pack.

So, yes, this card is scuffed, its corners rounded, its left side creased. But when I look at it, all I see is A Jackie Robinson Card. Condition doesn't even enter my field of vision. I'm too happy to think about condition. 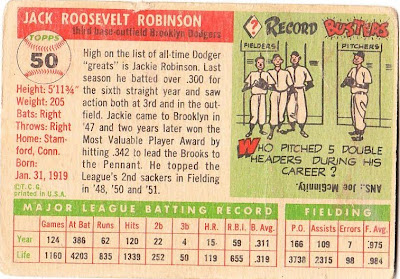 There is the super-fine back. Robinson is listed as 5-foot-11 and THREE-QUARTERS. Isn't that great? Can't you see Robinson saying, "AND three-quarters. Get the three-quarters in there!"

Also check out the cartoon. Now that's when pitchers were pitchers. None of this "go 7 innings and let the jokers in the bullpen butcher your victory into a loss." Not that I would know anything about that.

Once again, I am overwhelmed by the generosity of my fellow bloggers. You guys and gals are always great.

Now, if you'll excuse me, I'd like to hold the card in my hands again.

Dodgerbobble said…
'Now that's when pitchers were pitchers. None of this "go 7 innings and let the jokers in the bullpen butcher your victory into a loss." Not that I would know anything about that.'

Charles @ Hoopography said…
Congrats on this awesome addition to your collection. Condition really doesn't matter when it comes to these cards. Its all about the classic card designs and iconic players. That's awesome that you got a card of one of the most historically sig. players of your team. Enjoy the card.
August 17, 2010 at 9:05 AM

AdamE said…
I don't know what to say except...

Hey Phungo, do you have any Ted Williams cards?

Jeremy said…
Woah, nice card. It's still has nice vibrant colors and the wear isn't so bad. Congratulations on getting that a card from Jackie's playing days. I think the wear adds to the value of the card.
August 17, 2010 at 11:57 AM