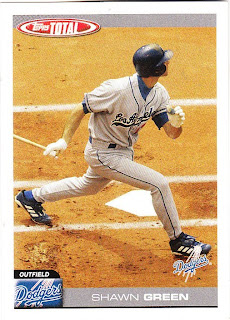 I probably have this set ranked too highly on the countdown. But it's here for a couple of reasons.

The first is I'm a sucker for Topps Total. The set appeared for four brief years, and I wasn't collecting during any of them. So, it's a bit of a case of chasing what I missed. But I also love the idea of having a set where every player on every team is included. It gives a good swift kick to star worship, and I like that. 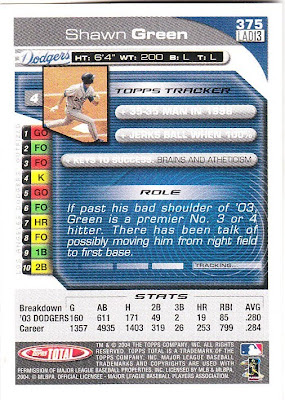 You could play a baseball game with card backs!

I know. So what? You can play games with lots of baseball cards. But I like this particular one for two reasons. First, it doesn't appear to be too difficult of a game. I'm a simple guy. I played baseball games with a pair of dice as a kid. But I think I can grasp the fundamentals of this without even knowing the rules (OK, maybe it can get a little complex).

The second reason is the game isn't the only element on the back of the card. You also have vital stats, the Topps tracker -- which I like because it's informative in just a matter of words, a paragraph on the player's role, and some brief stats at the bottom.

It's set up quite well, even if I'm normally not a fan of two lines of stats. You get a fair amount of information on the card, and you won't get a headache trying to digest it.

To me, 2004 was the evolutionary peak of the Topps Total card back. 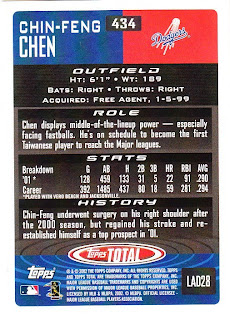 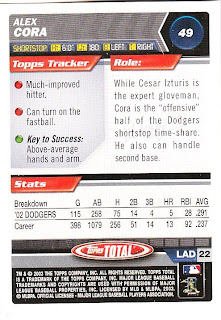 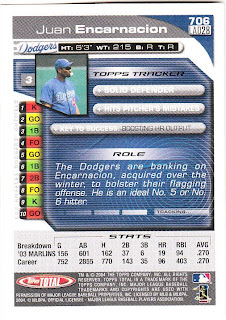 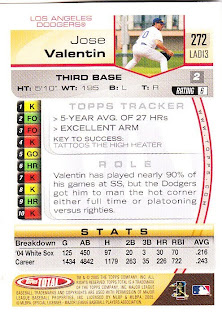 The one thing that I don't understand on the 2004 and 2005 backs are the numbers up near the top, along the side of the card. For example, the Valentin card has a "rating" of 6, with a number 2 above it. 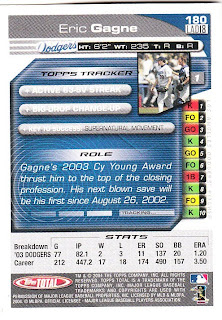 The 2004 Gagne card just has a number next to his photo. I'm sure it has something to do with the game you can play.

So, maybe the game IS too complicated for me (especially since I have no intention of learning it).

But I still like the card backs, even if Topps has declared Topps Total dead. It was one of their better card back performances.

The number of cards I have in this set probably wouldn't even get me through the first inning of a Topps Total game, so no "best of the set" this time.

dayf said…
How to play Topps Total in a nutshell:

Put the batter and pitcher card side by side so the stats line up.

Take a pile of Total cards you're not using and flip one of them over.

Use that mysterious number above the ratings to determine the result of the bat.

Check that number on the cards, there will be a result on each card. The results will be color coded red yellow and green. To determine which result is used think of the colors as a stoplight.

Tie goes to the pitcher.

That's basically it. Build a starting lineup and some pitchers and you're playing.

the Rating on the 2005 cards is an indicator of how good the player is. To create a fair game you and your opponent can limit the number of ratings points you get to build the team.

2005 cards have supadupa parallel cards where the ratings are boosted up. On these cards some of the results are color coded Orange, which beats everything.

PROTIP: instead of shuffling around your extra cards over and over, geek out and use a 10-sided die instead.