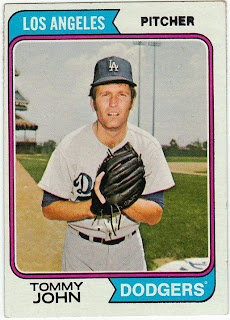 It's been a long work day, and after 10 hours of editing and writing, interviewing and talking, I don't feel much like posting.

So, I figured this would be a good time to feature the first card I ever owned. (Every card blogger has to do one of these posts, don't they?) You may think a post like that would take a considerable amount of time and thought, lots of stories and memories and emotions -- all that field of dreams, if you build it he will come, father reunites with son, mushy stuff, right?

Sorry, there's none of that here. I never had that kind of attachment to my first card. This is what I know: The first card I ever owned was a 1974 Topps Tommy John. It was the first card I pulled from a pack, which was purchased by my mother. The card is the reason that I am a Dodger fan. Something about it -- and don't ask me what that is because I don't know -- made me like the Dodgers from that point forward.

And that's where the story ends. I wish I had more, but I don't. I'm spent.

Fortunately, my vacation has officially begun, so I'll have lots of time to come up with more thoughtful posts. And a week of relaxation is good for a couple of other reasons:

1. I have a blog bat-around post to write. I've been thinking, and this could be a lengthy one.

2. I received an epic box in the mail this afternoon from Jeff of the I Am Joe Collector blog. And I am going to need the week to sift through that piece of work.

Tomorrow, I will be bright-eyed and bouncy. Guaranteed. Meanwhile, if you want to read something thoughtful, creative and poignant, try this. Goodbye, Ben. On this day of noting the first card I ever owned, thanks for being the first card blog I ever read.