My want list says I need nine cards to finish off Series 2 of the 2010 Topps base set. I choose to believe my want list, so I am anxiously awaiting the day that I find those nine cards.

People like Ted of Crinkly Wrappers have helped me get to this point by generously unloading their copious amounts of doubles on my doorstep.

Ted also sent me the Pesky Pole card from Series 1. (Still looking for Reggie's '77 World Series and Wade Boggs, the Chicken Man, to finish off the excellent Tales of the Game insert set). 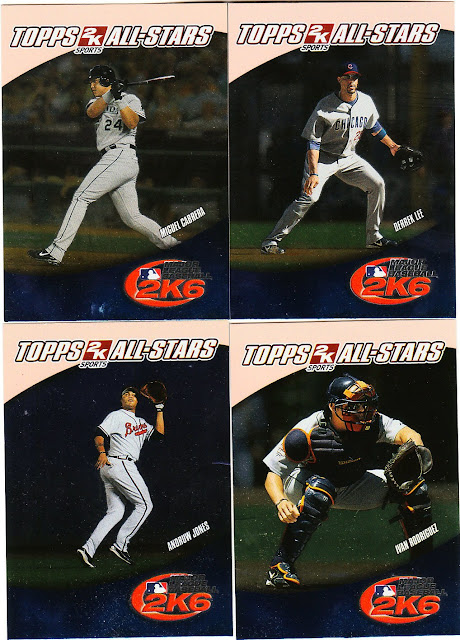 And he sent the last four cards I needed for the 2K6 insert set in the 2006 Topps set. I didn't think I'd ever get these cards. Half the set didn't come in packs. You had to buy video games to get them. I'm way past my video-game purchasing days, so this seemed like a hopeless case. Fortunately, Ted has or had video-game connections and the complete set is now mine. 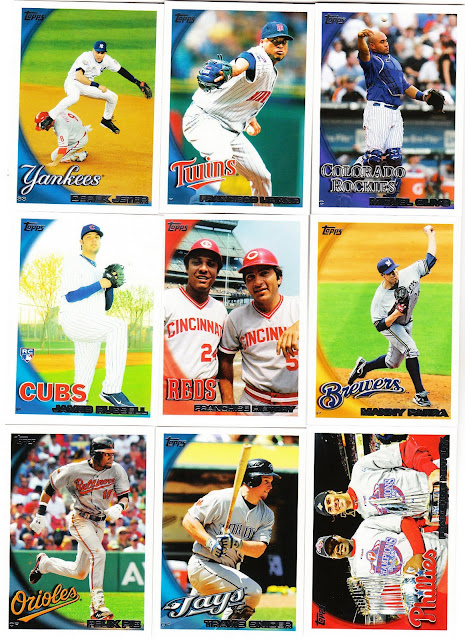 More 2010 goodies that officially brought me down to the final 9.

Once I got these cards, I figured it'd be a good idea to look through Series 2 and pick out my favorites, kind of like what I did with Series 1.

Here are the favorites: 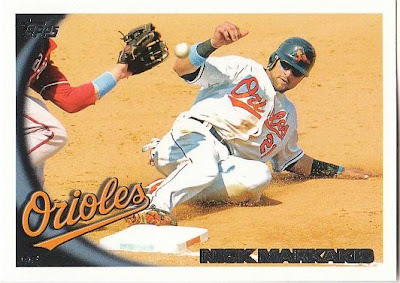 #559 - Nick Markakis. Not terribly special. But I do like the shot of Markakis and the ball arriving at about the same time. A cool moment in time. 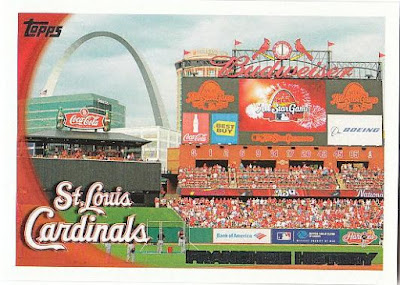 #455 - Cardinals, Franchise History. An awesome shot of the stadium and the familiar St. Louis skyline that immediately makes me think of my wonderful time in the city. #462 - Aclides Escobar. I just recently figured out how to pronounce this guy's first name. So now I feel comfortable featuring his card. It's quite cool. 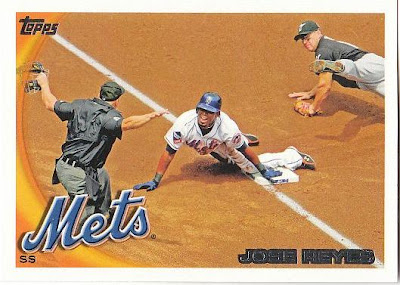 #339 - Jose Reyes. This just might be the card of the year. I can't think of anything that beats it.

And that's where my review of the best of Series 2 ends.

I couldn't find 20 or even 10 cards that really stood out to me. Just these four.

That may seem to indicate that Series 2 isn't as good as Series 1, and there might be a little bit of truth to that. I haven't done a scientific analysis, and I guarantee you that I will never do one.

But I think the bigger reason that I could find only four cards to feature is that I'm kind of bored with the set now. I'm immune to the cards. I am "over" them.

I suppose that's only natural in August, but I don't like feeling that way. I want to be interested in the set from February to October, and then interested again when the Update set comes out. I suppose years of having abundant variety for sets and brands, especially when Upper Deck was around, has created that feeling of never being satisfied. I'll try to fight that and enjoy my 2010 base set.

At least until those 9 cards come my way.

I will look through the half-box I just ripped to see if I have any of the 9 you need.

WV = unfastbl
Sounds like something Vicente Padilla has in his repertoire.
August 7, 2010 at 12:07 AM