Who ya callin' yella? 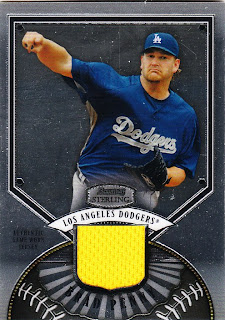 I received this golden number from Matt F. at Heartbreaking Cards. He remarked how unusual it was to see a yellow Dodger jersey item.

It certainly is different-looking. But I knew immediately how a yellow jersey scrap could be connected with someone in Dodger blue. Bowman Sterling only vaguely hints at it on the back of the card, but Penny was the National League's starting pitcher in the 2006 All-Star Game. 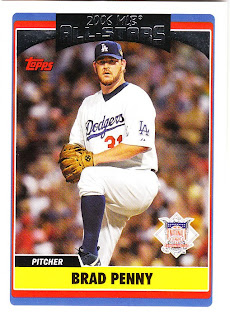 He did pretty well for himself, except for a home run to Vlad Guerrero. Then Trevor Hoffman had to go and ruin it all.

But prior to this All-Star Game and during the usual All-Star festivities, the National League players were forced to wear this: 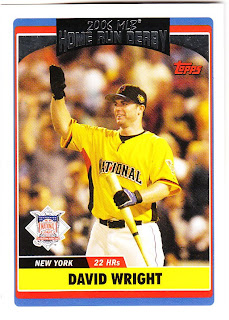 So, that's where the yellow came from for that 2007 Bowman Sterling Brad Penny card.

But that got me thinking about a jersey card-related idea that I'm sure plenty of others have thought about before.

How cool would it be to collect jersey cards of every color possible?

Now, I'm not much of a patch person. I just don't understand the fascination with them. But I'm assuming part of the interest involves the mix of colors in the patch. But instead of patches, I think it would be awesome to have as many different-colored jersey cards as possible.

So, I immediately looked through my meager jersey collection to see how many different colors I had: 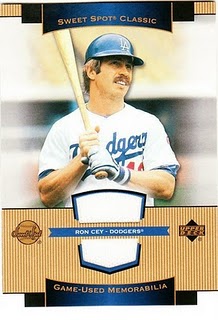 There was white, of course. 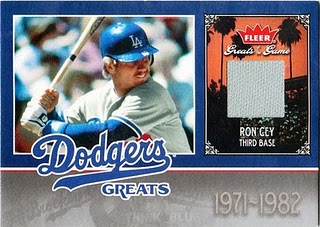 And gray, of course.

White and gray make up about 98 percent of my jersey cards, as I'm sure they do for almost every other collector. But I don't have a problem with that. They're the most readily available because of what teams wear. I certainly don't want to start seeing baseball games where all the players are running around in fushia and plaid uniforms. So I'm quite all right with white and gray.

But I did find a few other colors: 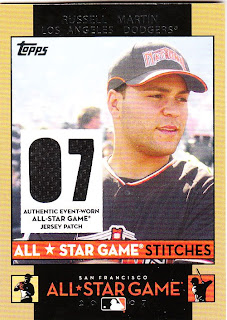 There is black. I think just about every team has a black jersey in their arsenal, although this is from an All-Star Game. (Now that I look at it, it says "jersey patch." It doesn't feel like a patch, but maybe I have to disqualify this card). 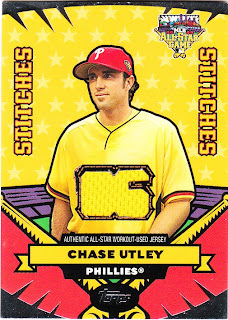 Here is yellow again, from the same All-Star Game as the Penny card. I really should send this card off to Phungo for his Jackie Robinson deed. 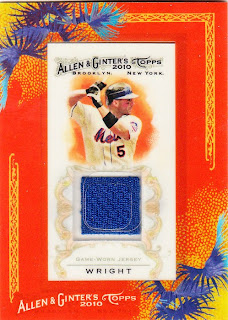 Here is David Wright again, with a very nice blue jersey swatch. I won't be hanging on to this card for too much longer as I'll be sending it along to Jeremy at NIGTRTB.

I have just one Dodger blue jersey card. I'd like to get more, but they don't wear their blue jerseys often. 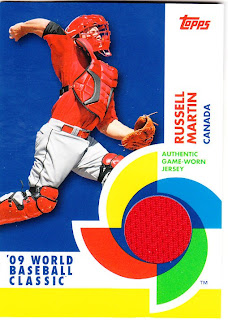 Here is red, from Russell Martin's appearance with Team Canada in the World Baseball Classic. I know there are red jersey cards for the Red Sox and Reds, among others. 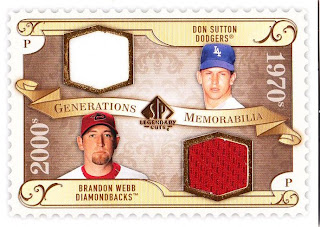 Of course, if you're going to collect a jersey of every color, you have to make allowances for the more modern teams and modern uniforms.

I suppose we could call this Brandon Webb jersey color "rust," or if we're feeling Cleveland Cavalier-ish, we can call it "wine."

I'd love to grab a jersey card for each of those colors, but I'm sure I'll never get around to it. I have too many goals on my collecting "to-do" list as it is.

Besides, I already have my favorite color of jersey card: 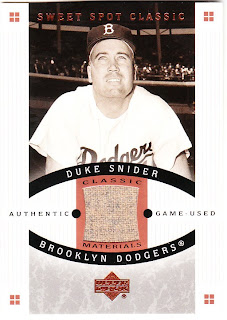 Charles @ Hoopography said…
Sweet Stuff!!!! I love figuring out where a jersey patch came from on a card. It's part of the fun of jersey cards.

gcrl said…
i have a few garvey brown jersey cards. sutton has a couple of yellow ones from his days in oakland.
August 18, 2010 at 8:25 PM

Jeremy said…
Whoo Hoo! I'm looking forward to the David Wright jersey. The Duke Snider jersey is really nice too. I think wool is much nicer than some rayon/spandex/nylon concoction that they use for the newer jerseys.
August 18, 2010 at 9:17 PM

Community Gum said…
I'd love to see a Padres Camo jersey relic. They wear them every sunday, right? So there should be a couple getting cut up, but I don't recall ever seeing them embedded in cardboard.
--Jon
August 19, 2010 at 1:57 AM

AdamE said…
You think there are a lot of color varations now just wait and see how many colors there are out there once Upper Deck starts using that NCAA liscense of theirs.
August 19, 2010 at 9:23 AM