October 31, 2008
I brought home my first packs of 2008 Upper Deck Baseball Heroes yesterday, even though I'm pretty sure that somewhere, either on this blog, or in a comment elsewhere, or in a rant at work, or talking in my sleep (I actually don't do that), I mentioned that I'm thoroughly unimpressed with this product. So I can't explain why I bought these. I guess I just wanted something different.

In opening the packs, I struck upon the reason why the Heroes cards work. It's a reason that I'm sure has been addressed many other times elsewhere, but I confess I often go into shutdown mode when certain card subjects come up (sheepish grin), so I might have missed it.

The reason why they work and that some people still collect these things is that the base card actually ... 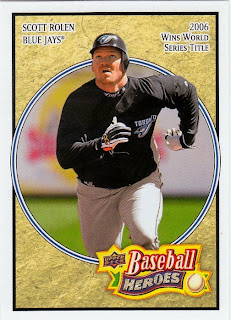 ... is the most god awful boring piece of cardboard I've seen on a current set (OK, there are a couple others -- UD SP Authentic isn't keeping me awake either). Using the background of what appears to be a crinkled brown bag? Wha? I know some people have great affection for these cards because they remind them of the old UD Baseball Heroes of the '90s. But I didn't like those cards either. Early '90s cards? Not a lot of affection there.

So, you've got a dull base card of Scott Rolen winning a World Series with the Blue Jays (yeah, I know he won it with the Cardinals, but do you think everyone looking at the front knows that?) With that as your starting point, how can you NOT be impressed when you pull this? ... 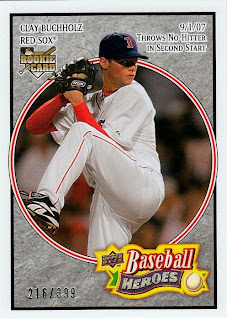 ... Silver is nice. And it's numbered to 399. (During Buchholz's breakout season last year, in one of his first starts, the Associated Press write-up spelled his name three different ways and interchanged those spellings throughout the story. It cracked us up so much at work that the article still hangs on a bulletin board in our department). 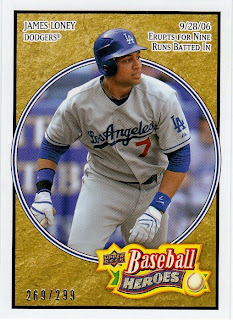 Gold is nicer. And it's numbered to 299. And it's James Loney, who I think opened a few eyes among casual fans this postseason. 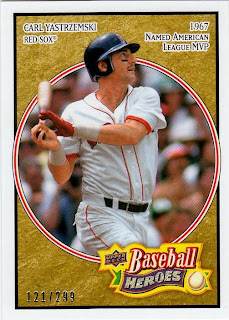 And a gold card of Yaz numbered to 299 is even NICER. So by the time you get to this: 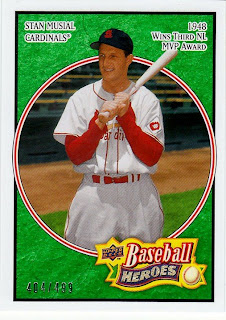 ... your eyes are bugging and your mouth is open. Electric green! Stan the Man! Numbered to 499! Cool! 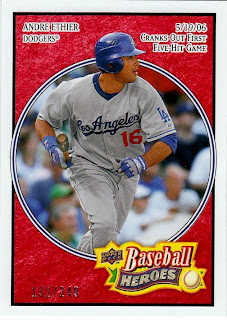 And then I pulled a red parallel of Andre Ethier (numbered to 299), and I suddenly didn't feel that these cards were a waste of my money. Suddenly I was one of those kids who was throwing all the base cards into the garbage and saving the inserts. And then I realized that I didn't WANT to be one of THOSE kids.

Somehow in the span of a few packs, I had gone from feeling disappointed to excited to cheap and dirty. That's what Baseball Heroes does to you. It bores you with the base card so much that you can't help but be impressed by anything else in comparison, and then it makes you hate yourself. I don't think I'll be buying any more.

Nachos Grande said…
I enjoyed your take of the set. I'm not entirely sold on Upper Deck's penchant for 12 different colored parallels of the every card - but the different colors are fun to pull. I like the dark blue personally.
October 31, 2008 at 1:23 AM

dayf said…
I've been real tempted to try to get all the parallels of Chipper Jones to make a rainbow, but I've just not had the extra time or money to waste on it.
October 31, 2008 at 1:26 AM

stusigpi said…
The base cards are nice, but they really blend together. As you may have read, I opened up 5 boxes of these and the first box I really looked at the base card and especially like the dual, tri, and quad cards. By box 2 I was looking for parallel and jerseys.
October 31, 2008 at 2:31 AM