When someone ignores the ceasefire 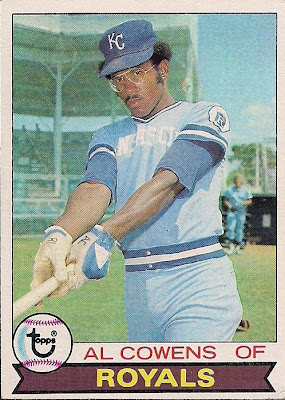 I have basically completed the 1977 Topps set. I'm just waiting for a few upgrades to trickle in, but I do have all 660 cards. I've double-checked for gremlins, too, and there is nothing missing.

I'll put together a fitting tribute for that set some time in the future but I can't right now because I'm still buried in cards from 1979.

Yup, 1979. That set that I said I was going to collect next, but wasn't ready for yet. I wasn't going to put up a want list, or request cards, or any of that because, I'll say it again ... I WASN'T READY YET.

Nobody listens to me.

I'm just now emerging from under an avalanche of '79 Topps sent to me from Adam of ARPSmith's Sports Obsession. He sent me around 350 cards from the 1979 set in a totally unprovoked fashion. He said he sent them so I could "get a jump" on the set.

Well, here's the thing. I already got a jump on the 1979 set. Back in 1979. I accumulated around 400 or so cards from the set that year. So, that's the reason I kind of wanted to get the want list up before I started bracing for impact.

Another reason is because a number of the cards in the 1979 set, just like in the 1978 set, are double-printed, and show up more often than other cards (I have a suspicion that this still happens to this day, but nobody publicizes it anymore). So you end up with lots of cards of the following: 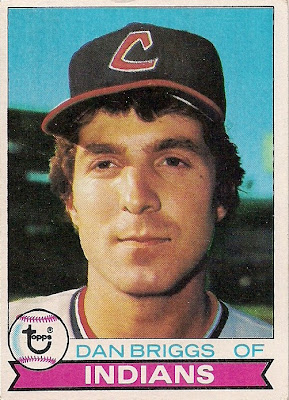 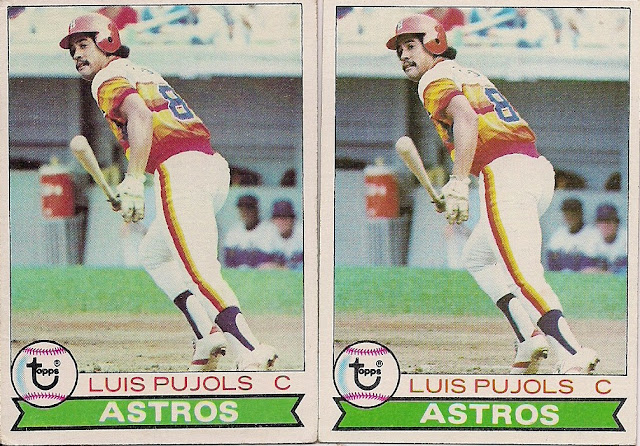 The only Pujols I knew for decades until Albert came along.

Longtime Cub Kessinger as a White Sox. So amusing to Topps that they double-printed the card. 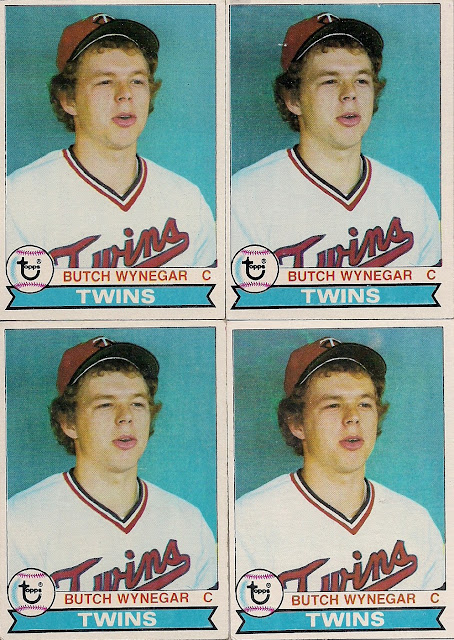 These aren't all from cards that Adam sent. These are accumulations from 1979 and ensuing years. The double-prints in '79 are so familiar to me that I know them just by looking at the card. Aside from the ones you just saw, you also have a better chance of getting multiple cards of Ed Herrmann, Cesar Cedeno, Wayne Cage, Larry Gura, Dock Ellis, Dell Alston, John Urrea, Lary Sorensen and many others.

I shudder to think how many Hargroves I could have accumulated if I bought as many cards in 1979 as I did in 1989. Fifty Hargroves is not unrealistic.

So, yeah, I do have some '79s already. Out of the 350 Adam set, I needed about 75. But that's pretty good. And it gives me some potential trade material for vintage team collectors.

So let's have a look at some of the '79s that I HAVEN'T seen before. 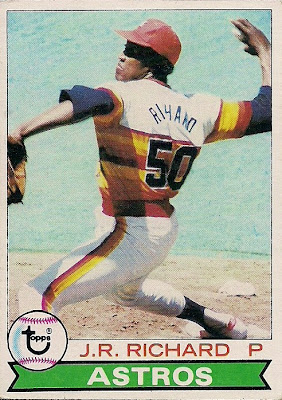 The first thing you need to know about the '79 set is that it's really not one of Topps' better efforts. It's a disappointment after the classic '78 set. There is a reason why this is the last set that I'm trying to complete from my childhood collecting years.

A lot of the photos in the set are blurry or dull. Some are horribly cropped like J.R.'s here. There are shadows everywhere and a washed-out feeling to some of the pictures. I think Topps was so excited to get its logo out on the front that it ignored everything else. 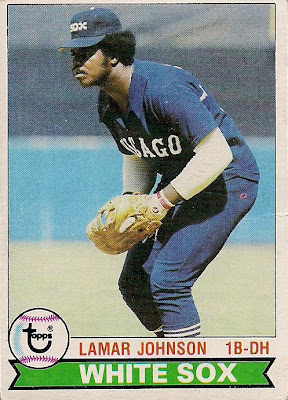 But there are some photos that just rise above all of that. I see those crazy '70s White Sox unis and an afro under the cap and I don't remember what I was complaining about anymore. 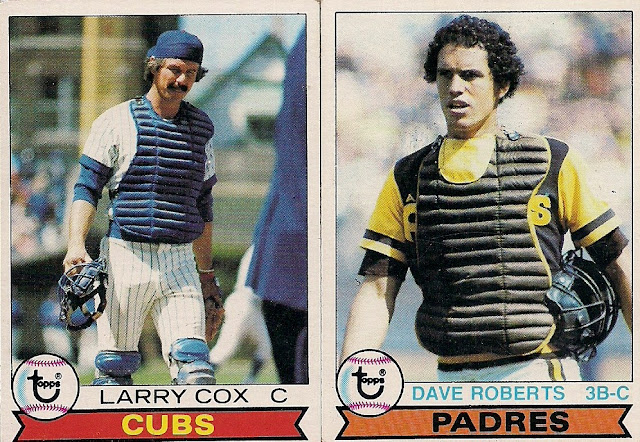 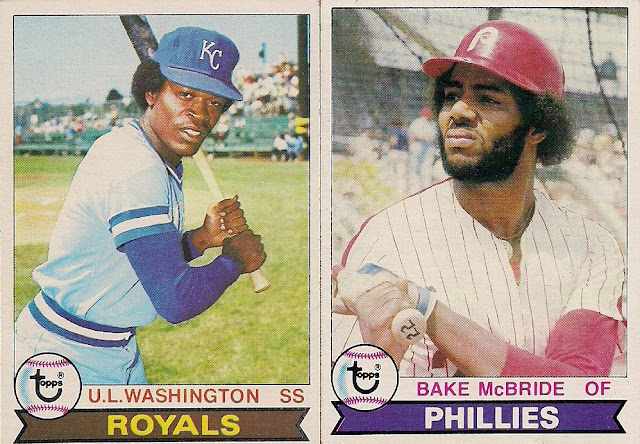 Bake is wondering what happened to U.L.'s toothpick. 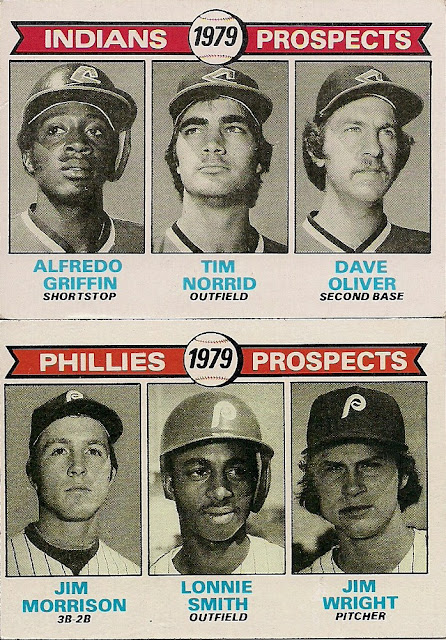 The black-and-white prospect cards were another disappointing part of the '79 set. But at least you get to see Alfredo Griffin and Lonnie Smith when they were young. 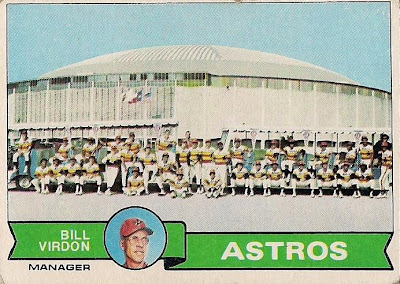 This might be both the most effective and least effective team photo in history. Also, I have this overwhelming desire to paint a giant "NL" on the Astrodome in this photo, blow the card up to poster size, make it into a flag, and wave it in front of Bud Selig's office all day every day.

I will never recognize the Astros as an American League team. 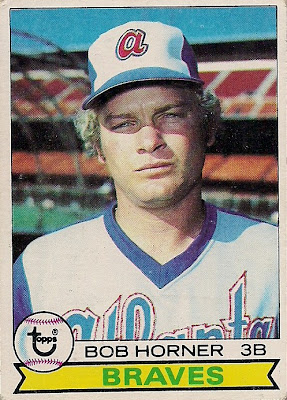 This card was as big as '85 Eric Davis or whatever '80s card you want to talk about when you use phrases like "kickin' it old school."

The best thing about the Horner rookie card is the back. 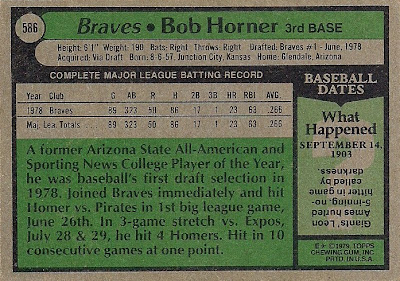 Seeing a complete career batting record with absolutely no minor league stats was WILD back then. It's still pretty cool to view.

Adam also sent some other cards to make up for the '79 avalanche that buried my home. 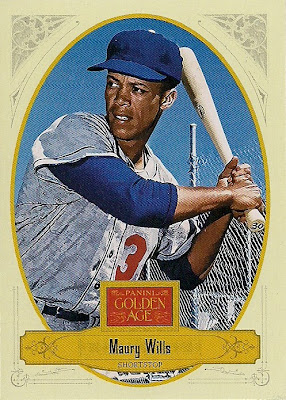 Here is a Maury Wills from that Panini Golden Age set that I've ignored. 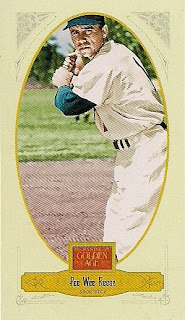 And here's a mini of Pee Wee. Too bad the photo frame has swallowed half his head. 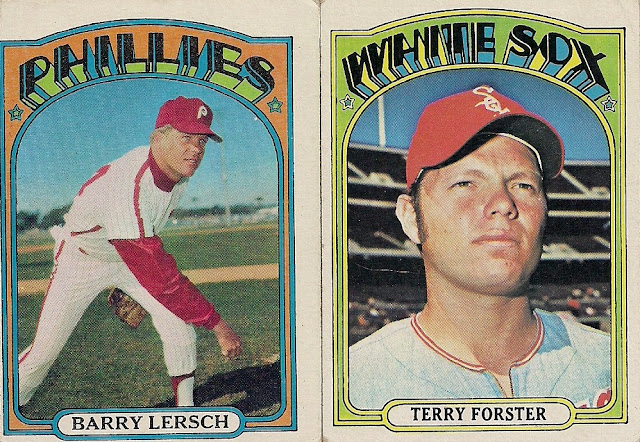 I really do appreciate all the '79 cards Adam sent, whether I was "ready" for them or not. Anytime I can cross cards off a list, they are welcome.

But I still don't have that list written yet.

I'll get there soon.

But you might want to hold off until then.

Or all you'll be doing is building up my '79-style bipping arsenal.

arpsmith said…
I just found out I am moving and have way too many cards so I figured what the heck. Glad you could use 75 of them. Sorry you have to store them now.

I have about 3-4 of those Horner rookies and I remember my collecting buddy was totally jealous of me because I had those. It was the card of the 79 set even over Ozzie for a little while.

I can't believe I sent you all those cards and you seized the opportunity to bag on my catcher. I am hoping for a bounce back performance by the good guys in Orange and Black tonight!
April 2, 2013 at 8:19 PM

Fuji said…
The Astros team card is pretty cool with the Astrodome in the background. Makes me think of the Bad News Bears.
April 2, 2013 at 9:16 PM

JediJeff said…
I have to ask, as I have posed this other places and I am not sure anyone has ever answered it:

If you are not accepting the Astros as an AL team, how did you feel when the Brewers jumped to the NL? Do you still only think of the Brewers as an American League team?
April 2, 2013 at 10:17 PM

night owl said…
Short answer: Yes, I do still think of the Brewers as an American League team. Or at least my brain does, until I remind it that it's in the NL now.

Long explainer: The reason that it's so difficult for me to adjust to the Astros in the AL is that Houston was in the NL for 50 YEARS (almost twice as long as Milwaukee, which was in AL for 27). No matter how much MLB tries to mix the leagues and pretend there is no "AL team" and no "NL team," it will never be that way to me. Some NL teams are intrinsically "NL," for a variety of reasons. The Astros were/are one of those teams. It will take years, decades for me to accept the Astros as an AL team, if I ever do.
April 3, 2013 at 2:35 AM

GCA said…
I think the L Pujols card is the most common in the set. He shows up in every little pile of '79s I come across.
The interesting part about Kessinger is that he also shows up as the manager on the team card. Don't see too many player/managers except Pete Rose in this recent of a set.
April 3, 2013 at 8:36 AM