The other side of despair

April 05, 2013
OK, the last post was a little depressing, what with all the wanting and not having. A little too filled with despair, eh?

I don't feel bad about writing the post, because I think people need to see the other side. But I also realize that showing cards that I have received inspire readers.

One of the genuinely shocking things that has happened to me since I started this blog is the number of people who have sent me emails that have said that my posts are inspirational, that the cards I show are a pleasant diversion, a vicarious thrill, or even spur them to get back into collecting. This was never an intent when I started this blog.

But I know it now and it's why I'll continue to write HEY, LOOK WHAT I GOT posts until the point this blog ceases to exist, and, yes, even if those kinds of posts bore me sometimes.

But this one isn't going to bore me. And I hope it doesn't bore you either.

There are players in the history of the Dodgers who played so long ago that the possibility of owning a card from their playing days is anywhere from "unlikely" to "impossible." Jake Daubert, Zach Wheat, Dazzy Vance, Van Mungo, Burleigh Grimes, etc., etc., etc., etc, dammit, why can't I like the Mariners?

Fortunately, there are enough card sets that pay tribute to past greats that I do have cards for all of them. They were just issued long after the players' careers ended.

But there is one player who so fascinates me that even a card of him issued long after his career wasn't good enough. It's Pete Reiser. I'd look at my Legendary Cuts Pete Reiser card from a few years ago or that LA Fire Department card from 1989 and think, "sure wish I had one from when Reiser was playing."

Reiser, if you don't know, was one of the most colorful, dramatic players in the game.

"Pistol Pete" led the National League in hitting his rookie year in 1941. He led the league in several categories and helped the Dodgers to their first pennant in 21 years. The next year, he started the season just like the previous one -- blazing. Then he ran full tilt into a concrete wall.

Reiser became known for running into walls. He broke his skull. He temporarily paralyzed himself. I'm pretty sure he still leads the majors in the following stat:

Most times carried off field on stretcher, career, 11.

Once they gave him last rites out on the field.

Needless to say, he didn't end up being the player that everyone thought he was going to be in 1941 (but he still stole home seven times in 1946). But with a story like that, you can see why a Dodger collector like me would pine for card from his playing days.

And without further ado, I will now say:

HEY LOOK WHAT I GOT! 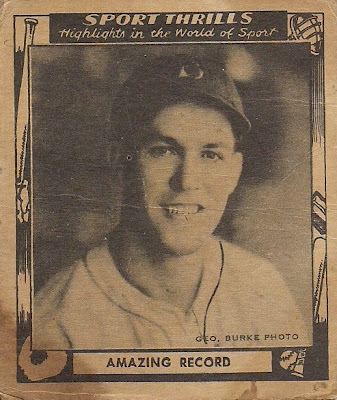 That is a 1948 Swell Sport Thrills card, issued in the last year that Reiser played for the Dodgers.

It was sent to me by David, who really sends some cool stuff (you'll see some more of it another time ... so, you know, you can live vicariously).

The '48 Swell Sport Thrills set, I am finding out, was a 20-card set issued by the Philadelphia Gum Company and featured memorable baseball events in history. Johnny VanderMeer's back-to-back no-hitters, Carl Hubbell's 5 straight Ks in the All-Star Game, etc. 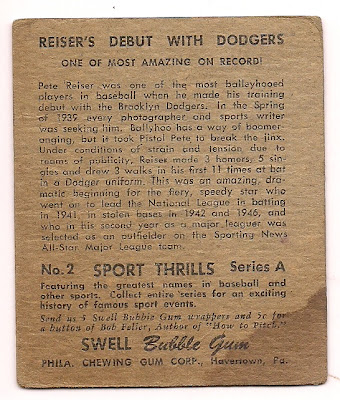 Reiser's card actually celebrates his hitting during spring training in 1939 at age 20 and throws the part about him winning the batting title toward the end. But you have to appreciate a write-up that uses "ballyhoo".

The Sport Thrills set also has cards of Jackie Robinson, Al Gionfriddo, Pee Wee Reese and Carl Furillo. At the prices that I see placed on those cards, I'll have some work to do.

But I've already got a head start, thanks to this card. A card from Reiser's playing days that I thought I'd never have.

That's what I'd like collectors to get out of these "look what I got" posts, too.

Nick said…
There's always room for these "Look what I got!" posts in the blogosphere. :)

I remember reading that fact about Reiser receiving last rites on the field in one of my old baseball books.

I have exactly two cards of his. The Legendary Cuts one you mentioned and an old Bowman reprint that features him as a Pirate.

kid2119 said…
Night Owl, yours is the first web site I look at when I get on my computer. I no longer collect cards (that's a sad thing to read after I've written it), but I still ENJOY cards. And I especially like your eclectic posts and comments. Please keep writing on this blog forever!
April 5, 2013 at 12:56 PM

Commishbob said…
The artwork that makes up the border combined with the newswire and George Burke photographs make that '48 Swell set really cool. It just screams 1940s.