'56 of the month: Chuck Stobbs 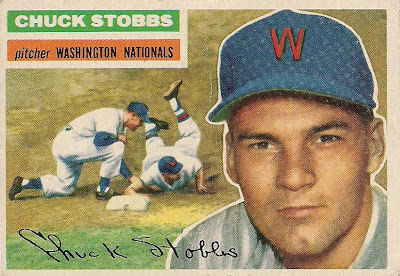 I selected this card today because of the action illustration on it. As you can see, it shows Chuck Stobbs, a pitcher for an American League team, diving head-first into a base.

Living in the baseball world that was created for us 40 years ago with the advent of the designated hitter (an anniversary that just passed 12 days ago by the way), the illustration strikes the modern card viewer as odd, depicting something that never happens anymore.

And, of course, that makes it wildly fascinating to me.

I like it because we have a certain perception about cards in the '50s: Paintings. Static poses. Staged and exaggerated photos of players pretending to field or hit or pitch. The players are doing what they "should do." Hitters hit. Fielders field. Pitchers pitch. We think of cards from the '50s as staying within the boundaries of card decorum. Tightly defined roles, just like the way of the world in the 1950s.

You want "unorthodox" on a baseball card? Try Upper Deck in the 1990s, pal. What are you even looking in the '50s for?

But as '50 cards have proven periodically, there was a little bit of whimsy in the hobby in those days, a desire to look outside the ordinary. 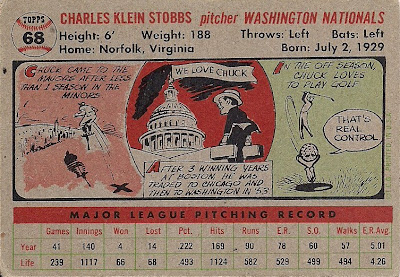 As for Stobbs himself, he is mostly known for giving up Mickey Mantle's famed 565-foot home run in 1953, and for being a pitcher on some lousy Washington teams.

Stobbs lost 20 games in 1957, and at one point in that season he had lost 16 straight when going back to 1956. According to this report, the Senators decided to make light of it by holding a "Charm Night." They gave Stobbs the uniform No. 13 and gave away a free rabbit's foot to the first 1,000 fans. The promotion worked. Stobbs won the game, 6-3, against the Indians.

It was another attempt to think outside the norm,  no doubt following the trend of the White Sox's Bill Veeck. That all happened in the 1950s. When supposedly society wasn't thinking outside the norm.

The '50s were a lot different than the way things are today. But in other ways -- a lot of ways if you look for them -- they weren't different at all.

Anonymous said…
What a beauty of a card!