What happens when your high school "hero" is on Twitter 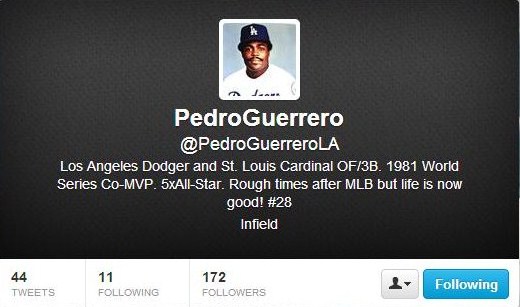 I've never been a fan boy. I do have my favorite teams and players, but I'm not a person who follows his team or player rabidly, commenting on every game or play and following the every move of all of my favorites.

First, I don't have that kind of time. Second, I just can't get that into flawed human beings who I don't know. You'll never see me soliciting an autograph at a game, standing in line for a signing, or calling up a sports talk radio site.

As a teenager, I refused to call my favorite players "heroes." They weren't my heroes. They were my favorites. The two players who received that "favorite" designation at the time were Ron Cey -- of course -- and, when Cey was foolishly traded away, Pedro Guerrero.

Guerrero was a burgeoning superstar from the moment I saw him in the back of my Dodger yearbook as one of those 1978 prospects. The amount of hope and promise that Guerrero brought to the early '80s Dodgers helped me forget the heartbreak of Cey's departure.

I've mentioned before that Guerrero was such a favorite that I wanted friends to nickname me "Pedro." It didn't work out so well. Probably because people knew I wasn't that kind of rabid hero-worshiping fan.

Guerrero had plenty of faults, both on the field and off the field, but he certainly provided memorable moments for Dodgers fans. His epic June of 1985 when he sent the league mark for home runs in that month and his 1981 MVP World Series performance are two highlights.

This week I found out that Guerrero was on Twitter. Or at least I think he's on Twitter. (When the account is not verified, you always have your doubts). I decided to give him a follow, although I follow very few athlete accounts, because like I said, I don't really care THAT MUCH.

So far it's been sporadically amusing. But that's about all.

I'd rather focus on his cards. 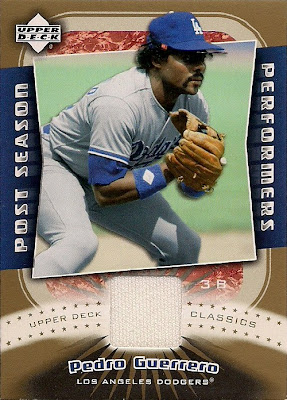 I received this terrific item from Jaybarkerfan's Junk in one of his many giveaways (so many that I forget which one this was -- by the way, I hope Wes received my last package).

I know I claimed this card when it was featured. As you know, relics don't interest me much anymore. But when it's a relic of your high school favorite, you jump at it instinctively.

I wish the card mentioned on the back why Guerrero is featured in a set called "postseason performers." But in typical Upper Deck "never mind the facts, ma'am" fashion, it does not.

Trust me, his '81 World Series display was phenomenal. 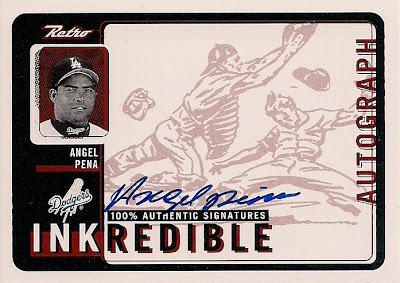 I also signed up for this card of flopped catching prospect Angel Pena. I think it's an interesting card. It's a unique design and it's an on-card autograph. I would have given Angel permission to scribble over the illustration, but I appreciate that he didn't. 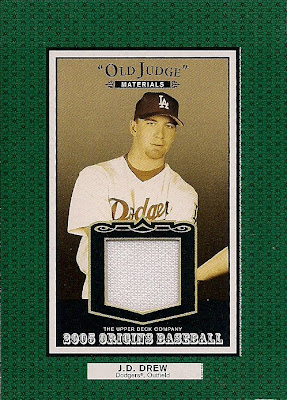 This was a throw-in, as J.D. Drew cards should be.

But not to sound ungrateful (too late), any freebie relic card is a nice gesture and appreciated.

Thanks, Wes, and another vintage package will be on its way to you in a week or two or three.

And if any of you want to check out my 1980s high school "hero," his Twitter page is right here.

steelehere said…
I'm curious if it's really Pedro Guerrero who's using Twitter. I remember during his 2000 federal drug trial that his attorney argued that Pete was "functionally illiterate" due to having an IQ of 70.