Hey there, Boston, you're all right with me 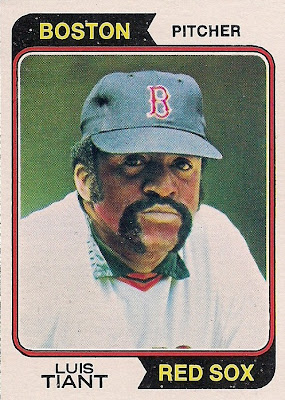 With all the hubbub over that situation in Boston, I was wondering whether I should post anything today. Nobody seemed to be interested in somebody's baseball cardboard anymore. They just wanted to talk about bombs and shootings and cops and CNN and "24." And then I realized that was only my Twitter timeline -- where nobody can stay focused -- and that we're not all in lockdown.

Card bloggers know they can still blog about cards, thank goodness. And I thank you all for continuing to show cards and not suddenly transforming into the Police Scanner Blog.

But I want to acknowledge Boston in some sort of card-related type way. I have affection for Boston. My brother used to live there. His former in-laws still live there. I have enjoyed my time there immensely, which is not something I can say about every big city I have visited.

Yet, in the last 10 years or so, I have encountered too many people trashing ... well, mostly the Red Sox. But by extension, the fans and the city. Maybe that's some of the team's and the area's fault. But it makes me defensive, knowing the good people that I know there.

Consider it a diversion from whatever the media is flipping out over today.

I know. A blog as a diversion. What a concept. 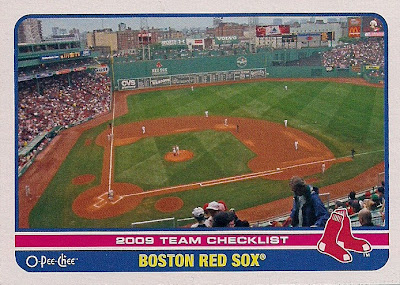 I'll start with Fenway Park. Still one of the loveliest parks I've ever visited. I still remember trusting my brother with my life as he darted through typical Boston traffic to get to a meaningless game between the Red Sox and the Royals in the early '90s. 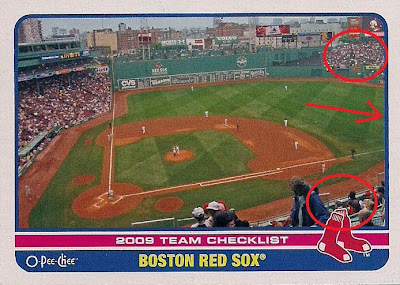 Those are the places where I've sat in Fenway Park (the arrow points to some seats off-stage). I'd like to go back there again. I hope I can go again without submitting to a retinal scan. 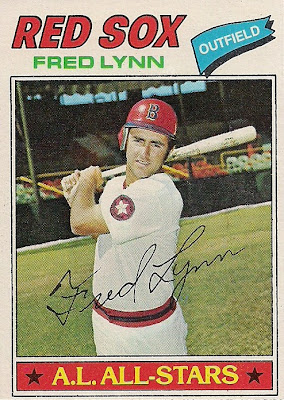 Everyone shows the 1976 Freddy Lynn. Nobody shows '77 Freddy. I remember this card fondly not only because of Lynn's high-standing in our household in the late '70s, but because this card was a particular favorite of a girl in my sixth grade class. Don't tell her, because she was only 12, but I think she had a crush on him.

By the way, the Sports Illustrated Twitter guy was taking requests on which Boston sports photos to show the other day. I asked for late '70s Red Sox with their red caps. He didn't show a single one. So I just showed one myself. You're welcome, night owl. 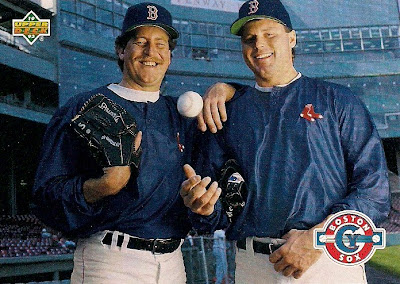 This is here mostly because it's Frank Viola's birthday today. And because I forgot that he pitched for the Red Sox. And because you can see the press box area of Fenway Park. Notice, though, I haven't mentioned the guy on the right. 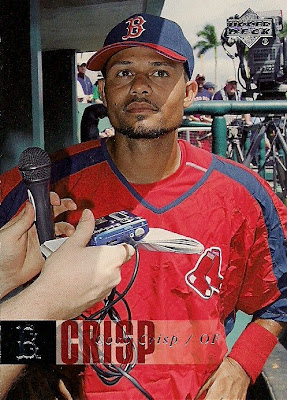 I bought a staggering amount of 2006 Upper Deck during my return to modern collecting that year. I have no attachment to the set, though, so I've been dealing off cards here and there. Yet, I can't give up this one. The juggling-tape-recorder-and-notepad pose is one I know well. I also dig the distant palm tree in the background. And, of course, there's the fact that it's Coco. 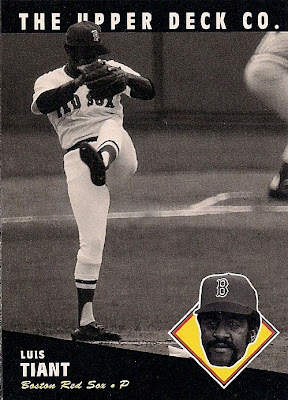 1970s baseball cards never truly illustrated what '70s pitchers were known for during their careers. No photos of Fidrych grooming the mound. No photos of Hrabosky walking away from the hitter and pounding his glove. No photo of Luis Tiant performing his classic pre-pitch pivot.

Thank goodness for retro sets and photo archives. This is what us kids in the 1970s enjoyed, folks. It was a scream. 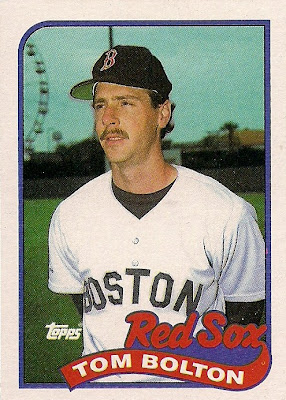 This card has been featured on the blogs a time or two. Tom Bolton won't be remembered a lot for what he did in baseball. But the Ferris wheel in the distance will always make his card memorable.

I read that the wheel was part of an amusement park built around a ballpark at one of the Florida spring training sites back then. Nice idea. If the team's play doesn't make you puke, maybe one of the rides will. 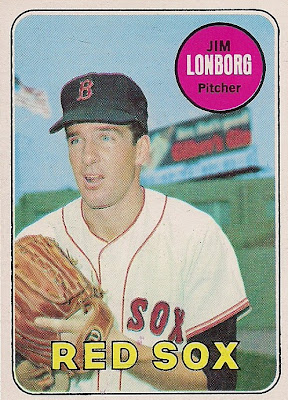 1969. The year kids asked dad what Gilbey's gin tasted like. 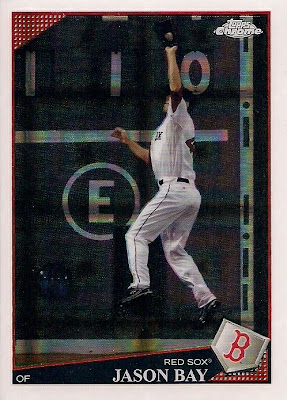 I still think this card photo's tribute to ebay is genius. But I'm not really sure why I'm hanging onto the xrefractor version. I deal with so many Red Sox fans that I would've figured it'd be gone by now.

(Yes, it is an xrefractor even though it's difficult to tell. I don't know what I'm paying my scanner for). 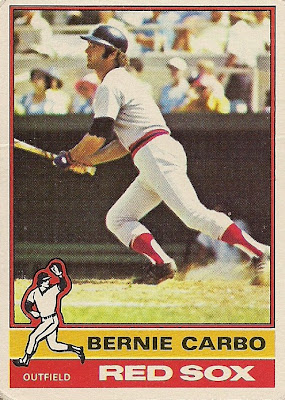 If I were ever to do a "definitive Red Sox cards" post, I'd probably never get out of the 1976 Topps set. To me, that set's Red Sox cards are absolutely iconic. For the players pictured. For the year after the classic 1975 World Series. For the place I was in my life (a fifth-grader infatuated with baseball). Rice, Lynn, Yaz, Dewey, Lee, Tiant, Fisk, Petrocelli, Cooper, how do you pick?

Bernie Carbo always meant something special to me because he wasn't a high-profile guy. And he was one of those long-haired dudes that I liked. I had no idea about his wild-and-crazy ways at the time.

This card, by the way, is the identifying card on the outside of my 1976 Topps binder. 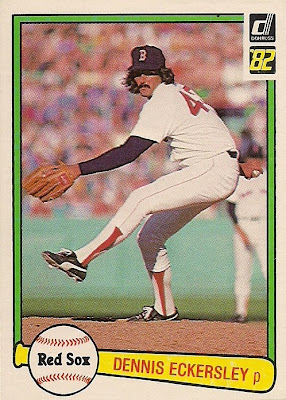 This card came out the year that I went to my first game at Fenway Park. Eck was the starting pitcher for Boston. He pitched well. We had seats behind the first base dugout and to see Eckersley walk off the mound each inning and see him THAT CLOSE was something I will always remember. It made this card very special to me.

And those are 10 Red Sox cards that I like.

I could easily make it 100 Red Sox cards that I like, and I certainly have featured plenty on the blog over the years.

Now, I know there is no Red Sox game tonight (or Bruins game). So, I hope some Boston-based fan will be somewhat amused by the cards featured here.

And when you're not afraid to come out of your house anymore, make me jealous again. Head to Fenway, grab a Sam Adams, and watch a game.

Swing And A Pop-up said…
Trust me when I say it's crazy up here. There's been nothing but constant media coverage on the TV and radio since Monday.

Thank you for the Red Sox card tribute.

Although if you listened to Boston sports talk radio for any length of time, you'd think the Red Sox fans hated the Red Sox too.
April 19, 2013 at 7:27 PM

Metallattorney said…
Love the tribute, and yes that Tiant is amazing. If you are looking to move that Bay Xfractor, I could definitely use it, and I am sure I have a lot of Dodgers you could use for it.
April 19, 2013 at 9:40 PM

Commishbob said…
I've never been to Boston. Hartford is as close as I've been but I'll be there in September for a few days as I attend the Basketball Hall of fame ceremonies in Springfield. I'm really excited about the trip. Sadly the Sox are playing in New York during my visit.
April 20, 2013 at 12:32 AM

Robert said…
Well done. Though I've never cared for Boston sports teams in general, I've heard nothing but great things about the city itself.