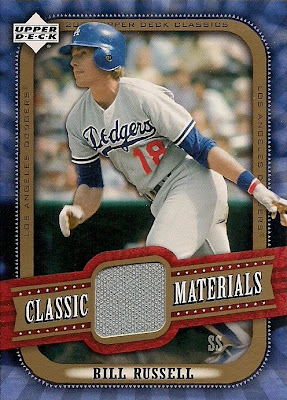 One of the things about blogging that I keep forgetting is that it is a wonderful way to network with other collectors. (I really don't like that I just used "network" as a verb, but I suppose I need to join everyone in the '90s finally).

If all I do is post to this blog once a day, it automatically makes other people know that I'm still interested in collecting. And I find that I have that same perception of others. I am much more apt to trade with collectors who blog frequently rather than infrequently.

It's simply "out of sight out of mind." Or, rather, the opposite of that. Which I guess would be, "the squeaky wheel gets the grease."

That is one reason why I continue to blog as often as I do. Yes, there are more urgent reasons for why I write, but a key one is to keep my name out there. All the time. HI THERE! I'M NIGHT OWL. I LIKE CARDS! DODGERS AND STUFF! GOT ANY?

My ability to make connections struck me a couple of weeks ago when I was contacted by Rob from Voice Of The Collector. Rob doesn't blog as often as he once did, but he's still a collecting heavyweight, on the radio, on the Twitter, and he's got quite a collection.

Because I am one of those noisy bloggers WHO LIKES CARDS, he knew that I might be interested in some Dodgers that he was about to put up on ebay. So he contacted me first and let me pick out anything that I liked.

Because I have connections.

I felt privileged. I wasn't one of those poor saps on ebay who would have to compete with untold numbers of like-minded collectors and dread the ever-present snipe. I was able to choose the cards that I wanted. At my leisure. Invitation Only. Like a big shot. Big shot Night Owl selecting cards with a snifter in one hand and a cigar in the other.

I first settled on the Bill Russell relic card that you saw at the beginning. I'm still down on relics and all, but I don't think I have a hit of any kind of the shortstop from my childhood, so this card was absolutely necessary.

Then, after taking my sweet time to make my next selection -- a few sips here, a few puffs there -- I picked this card: 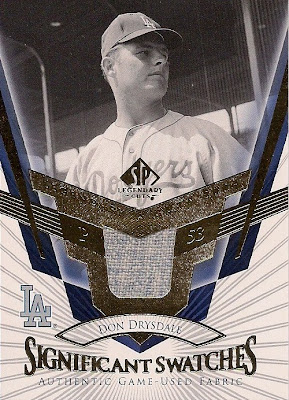 Yup. It's another swatch. But it's a grand, old wool swatch of Big D. I won't turn down anything from the man who didn't care whether the batter thought there was "a history" between the two. Drysdale was going to knock him on his ass anyway.

OK, so that was two terrific items chosen without any competition.

Normally, that would be enough. If I was on ebay, where the pressure can wear you out (well, it wears me out anyway), I'd be a mess. But instead I was feeling very relaxed.

So I grabbed this card: 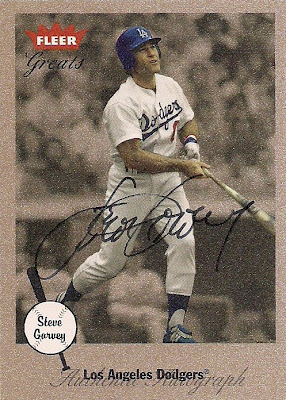 This is my first certified on-card Steve Garvey autograph. It's actually the first card that struck my eye among the cards that Rob presented. And I'm sure if I tried to grab this card elsewhere, I'd pay more than I did here.

In fact, I had enough left over to pick another autographed item: 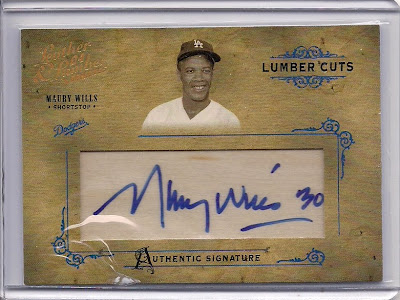 I do love an autographed card of a 1960s Dodger star. It's especially great that Wills signed his uniform number, too. (The card is really wedged in the top loader, so I just scanned the whole thing).

With that, I told Rob I was finished, paid by my exclusive privileged customer discount, grabbed a couple complementary cigars, and was on my way with four great cards.

I really appreciate him thinking of me like that and giving me the opportunity to boost my collection.

But that's the kind of thing that can happen when you have connections.

And when you blog.

And when you JUST WON'T SHUT UP ABOUT CARDS.

Yankeejetsfan said…
Awesome pick ups. Love the Drysdale. I'm down on relics as well, but I would have picked it up as well if I had the chance.