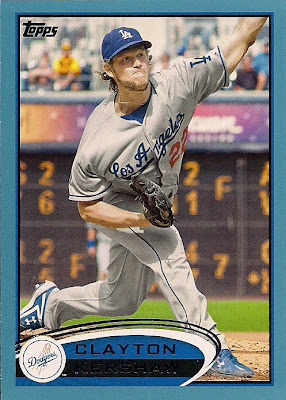 I was pretty happy with that arrangement and had loaded up my cart with a bunch of Dodgers for when I was ready to hit the old "ship" button.

But those cards never made it to me. I panicked.

My favorite current player, as you know, is Clayton Kershaw. His cards are starting to go for prices that make me uncomfortable. Some collectors say he's still undervalued. I say, "I want to travel in the cash circles that you do, bud." The cards I see aren't undervalued.

Then Kershaw pitched a shutout on opening day and hit a home run. I started to get a little concerned.

The second game he didn't allow a run again, and got the win again. That's when I panicked.

I took everything that I had in my COMC cart and dumped it. I then loaded it back up with Kershaw cards.

Then I hit ship -- before he no-hits the Diamondbacks tonight.

Most of these cards are of the serial-numbered/parallel variety. Nothing too fancy, but snazzy enough for me. And the 12 Kershaws that I received officially makes him second on the list of players I collect. Only Hideo Nomo has more cards in my collection than Kershaw.

So let's see some Kershaw cards. Maybe it will convince him to sign that $200 million-plus contract that's sitting on the table. 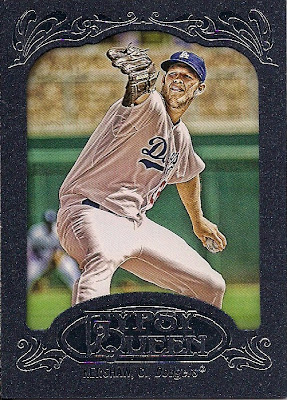 Not much to say about this one. It's a necessary evil. Blue-framed Gypsy Queen from last year. The design still makes me think of hideous gargoyle monsters. 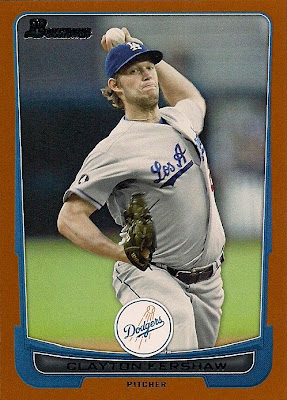 Bowman seems to be pretty proud of its orange parallels every year. I'm not a huge fan, especially since they've transformed from orange to this pumpkin color. But I turned it over and looked at the gold-foil stamping and the color out front didn't matter anymore. 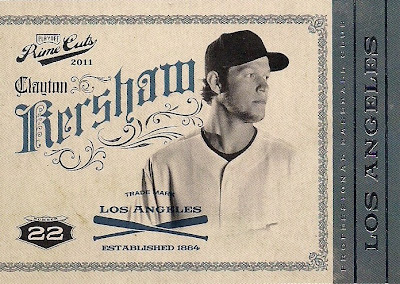 Yes. I got one of these things.

Normally, I don't give Panini a second glance when I'm buying online. But these Prime Cuts things are well-designed. I won't say the lack of a logo doesn't bother me, but the design softens the blow. Also, I wasn't aware of how thick these cards are until it arrived in the mail. 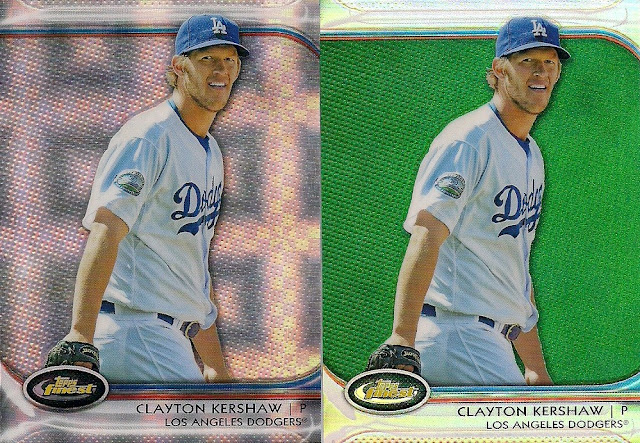 We're starting to get into cards that I never see in my neighborhood.

I used to at least try to pay attention to Finest every year. Now, I barely know when it is released. But I do try to pick up a couple of Kershaws every year. These are from 2012. 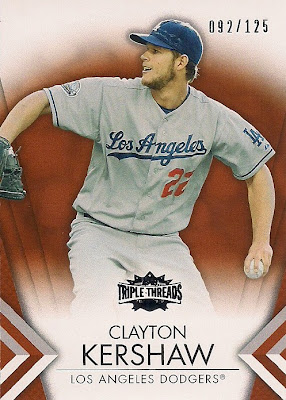 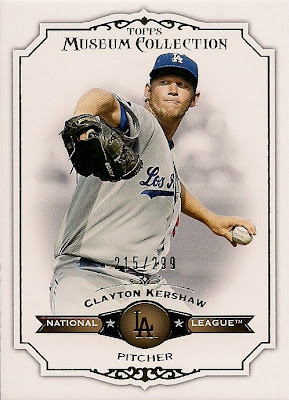 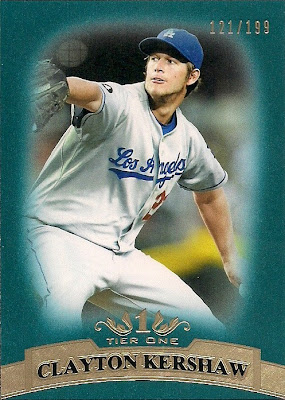 These might as well be from the same set as far as I'm concerned. Triple Threads, Museum and Tier One. I will never find any of these in a retail store. I will never have the opportunity to open a pack of them -- unless I become one of those wild-and-crazy guys who orders up boxes of Triple Threads and flaunts my jambalaya hits on youtube. And if that happens, you know the soul-sucking demon has visited my home. 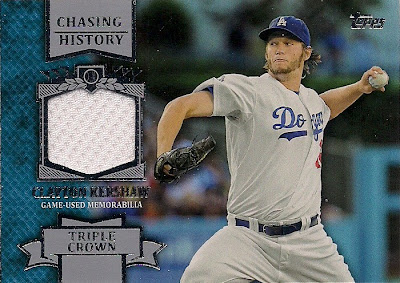 I don't do relics anymore, but I had to grab one from this year's Topps just to see what they were like.

Like any other relic you've been reading about for the last 15 years. 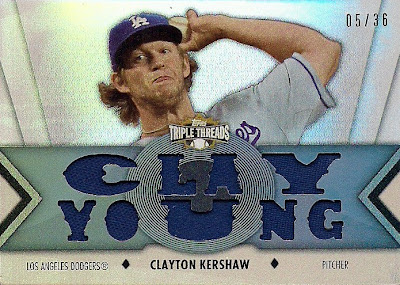 As soon as I bought it, I looked to see if there was ever a major leaguer named Clay Young. Unfortunately, not yet.

I'm still keeping the card. And still for the stupidity factor. 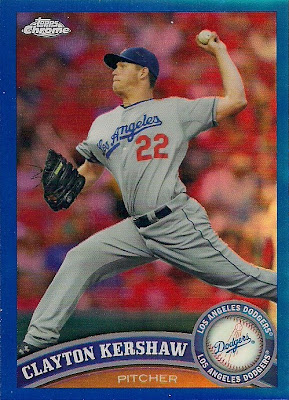 Best card from the package. Blue refractors rule over whatever 1/1 piece of terry-cloth-robe-scribbled-pen-marking-portion-of-left-behind-stadium-hot-dog-wrapper-real-live-uniform-button-gasp-is-that-a-red-thread-hanging-from-the-button card that is the latest thing.

And that was my panic Clayton Kershaw card haul.

I DID leave enough to grab a couple of non-Kershaw items. 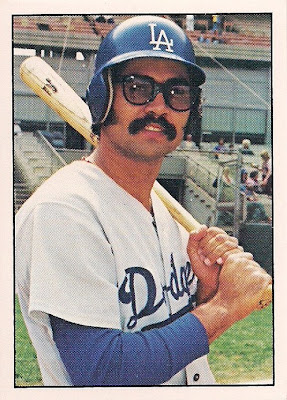 I booted a few SSPC Dodgers when I was loading up on Kershaws. But I could never leave Henry Cruz behind. Too much style. 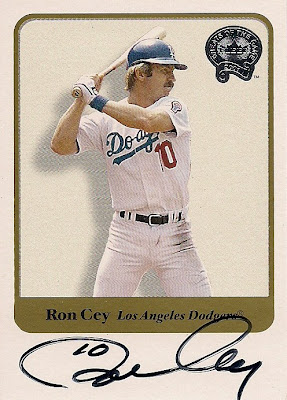 And I refuse to boot a Ron Cey autographed card for ANYTHING.

Meanwhile, my hope is to be able to afford Kershaw cards even while he's winning 25 games this year.

But if not, I was able to land 278 Kershaws before he hit the stratosphere.

The Dutch Card Guy said…
Awesome Kershaw cards, funny to see that i had the same worries after his first game...lets hope prices stay reasonable and not move into the Verlander direction !
April 13, 2013 at 1:15 AM

Zayden said…
Every time I see a Museum Collection card I always stop and stare at it a little longer than the other cards in the post.