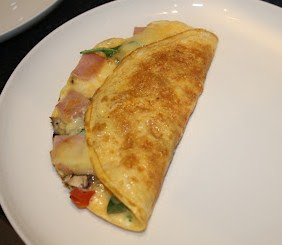 When I was in college, I worked various part-time food service gigs at the school. From greasy burgers and fries on Thursday nights to grilled hot dogs on summer afternoons to salads at lunch, I dished out a ton of grub.

But the station where I made my mark was at the 10 a.m.-2 p.m. grill. There, we distributed bacon-and-egg sandwiches, grilled tuna and cheese, and other stamped-with-a-spatula fare. But my specialty was omelettes.

I became pretty good at making them, an activity with which I reacquainted myself when I changed my diet a year ago. Suddenly, yet another skill I learned in college came in handy again, in the form of a feta cheese omelette (don't let the prevailing wisdom fool you, health-watchers. Eggs are good for you).

When I started making eggs again, my college days at the grill started coming back to me, too. And then I remembered what the best part of grilling was back then.

I did such a decent job with eggs that I became the designated omelette-maker for certain girls at college. They would single me out, from the three or four people we had working at a time, as the one to make their omelettes. Some were very particular about how they wanted their eggs made, but if you did it to their specifications, they really liked it. Who knew that the line for eggs would be the place to flirt in college? (I suppose any place on campus is a place to flirt when you're in college).

I assure you that all I was talking about in that last paragraph is honest-to-goodness cooking of food. But the sexual overtones weren't lost on me.

For a few years afterward, when the topic of what I did in college would come up with certain people, I thought it was cute to say, "I made omelettes for girls." The implication being, of course, that I was constantly asking bed partners how they liked their eggs in the morning.

Stupid stuff, yes. But it's contributing to a blog post tonight and that's what matters these days.

The phrase, "making omelettes for girls," could be a euphemism for making things sound more impressive or better than they are, like I did when someone asked me what I did in college.

Believe it or not, we make things sound better than they are a lot on the card blogs.

Think of all the "look what I got!" stuff you see on the blogs. Do you ever think, "where's the 'look what I didn't get' part?"

I do. Maybe it's just me. Maybe everybody else just wants to see the happy and none of the sad or the mundane. But nonstop "GOT IT!" gets tiring to me sometimes. We all know that even though we constantly write about all the great cards we've obtained that there are loads of cards that we still want and loads of cards that we don't have. While I'm writing about the cool card I landed, part of me is also thinking about what I missed out on, and sometimes even feeling a little guilty about not mentioning it.

Sometimes I make my collection sound better than it is. What I'm doing is "making omelettes for girls," whether that's a good thing or not.

So this time, for once, I'm not showing what I have.

I'm showing what I don't have and probably never will have.

LOOK WHAT I DIDN'T GET! 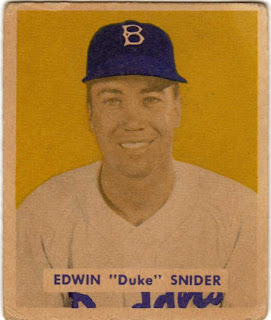 Duke Snider's 1949 Bowman rookie. Would love to have it. Probably not going to get it. 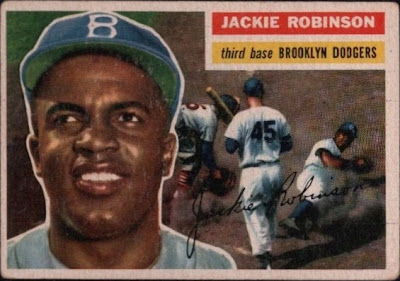 Jackie Robinson's 1956 Topps card. I'm somewhat confident that this will be mine someday. In much more miserable shape, of course. But the point is, I don't have it right now. Great card. That's not mine. 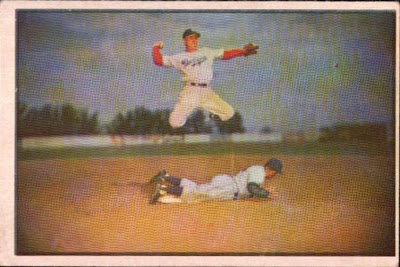 Pee Wee Reese, 1953 Bowman. One of the top 10 greatest cards of all-time. Ain't no way I'm going to own it (don't tell my brain though). That fact annoys me so much that if you do have this card, I don't want to hear about it. 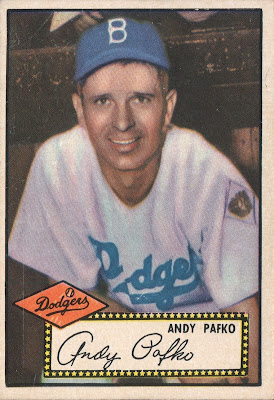 Andy Pafko's 1952 Topps. Or the first card on the "first" Topps set (we all know it's not the first). I think I'll obtain this card someday and since it's appeared in reprint form a bazillion times, it lessens the sting a little. But, still, it's freakin' Andy Pafko. I should have it by now.

On the opposite side, I can probably add some of the crazy-priced high number Dodgers in this set -- like Dick Williams, Billy Herman and Ben Wade -- to the "I won't ever have" list. 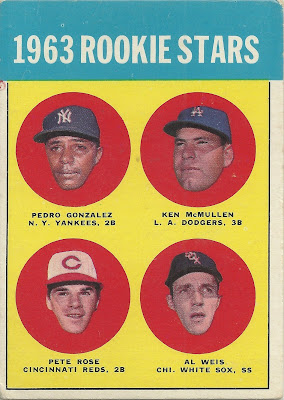 Anyway, those are the cards that spring to mind instantly as cards that I both really, really want and are unobtainable for the foreseeable future.

Of course, there are many other cards I will never acquire, the bazillion 1//1 cards that are out there. The crazy '90s one-off parallels from some set no one remembers. Obscure tobacco era cards and Venezuelan '60s cards.

I freely recognize that I will never own some of those cards, right here on this blog. That's right, everyone. There are great big gaping holes in my collection.

I'll never give up hope of landing Pee Wee's '53 Bowman or any other card that coaxes drool from my mouth.

But to say I will own one of those cards some day?

Metallattorney said…
I know how you feel on that McMullen. It took me awhile, but I finally tracked down the Bo Diaz rookie card which is notably the only Red Sox card of Diaz. The reason it took awhile was because it was also an early Dale Murphy card. Obviously value-wise it is not nearly as much as that McMullen though.
April 4, 2013 at 9:53 PM

I know that feel, bro.

Swing And A Pop-up said…
At my house instead of a "Honey do List", we have a "Honey don't List". She lists things she doesn't want me to do. And when I don't do them, I cross it off.
You could do that with the cards you don't have. Make a list, and when you don't get them, cross 'em off.
That way you don't do anything and you can still feel productive.
April 4, 2013 at 11:39 PM

Play at the Plate said…
That's like a Hall of Epic Greatness Nebulous Nine (or Five) Edition post. Sweet cardboard. By the way, I just opened the package you sent. God bless you my mini loving friend.
April 5, 2013 at 1:09 AM

gcrl said…
Well...I won't say that I have 3 cards on your list. Made possible by Pinholes, scuffing, and trimming.
I am resigned to never owning any if the high numbered 1952 Topps dodger cards. Or that pafko.
April 5, 2013 at 7:04 AM

Spankee said…
I would just like to commend you on the use of feta cheese in omelettes. My standard in college was bacon/mushroom/feta. The best omelette I've ever had though: Lump crabmeat and feta...simply divine.
April 5, 2013 at 9:37 AM

Cards I want but will probably never have: