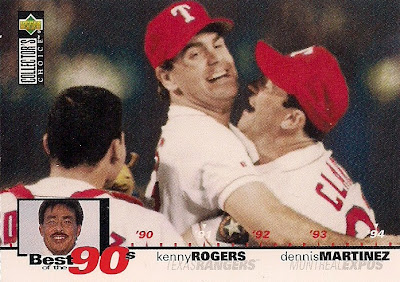 There are some cards that cause me to emit an audible "ugh" when I see them.

This is one such card.

Let's get the "jerk-face" part out of the way first. My dislike for Will Clark is well-established. Prickly, shrill, Giant-loser, these are some of the words I use and have used to describe Clark over the years. I'd like to say he was more enjoyable as a Ranger, but there was too much Giant stink on him by then.

Kenny Rogers, meanwhile, was a plain idiot. I will never forget his unprovoked assault on cameramen before a game in 2005. Terribly inexcusable and it blackened my perception of him forever. Don't like the guy.

To a lesser degree, there are a couple of other guys on the card who have never been my favorites. Ivan Rodriguez, while an admirable player, freaked me out with that face of his. If anyone was going to make an evil cartoon baseball character based on someone's facial features, Rodriguez is your man.

I hold a grudge, meanwhile, against Dennis Martinez for July 28, 1991, the day he threw a perfect game against the Dodgers. Bleah.

So we have this card here -- clever in its own way of celebrating two no-hitters pitched on July 28 exactly three years apart -- displaying a whole bunch of guys I don't like. And the card back is an entire write-up on Martinez's perfect game against the Dodgers. "He needed only 96 pitches -- 66 of which were strikes -- to dispose of the Dodgers." Well, goodie for him. Let me write that in my diary.

Oh, and I almost forgot about the low hug Clark is giving Rogers.

So with all of that in mind, there's no chance this is going in the Night Card Binder, right?

Can't be staring at that card in a binder full of beautiful nightness.