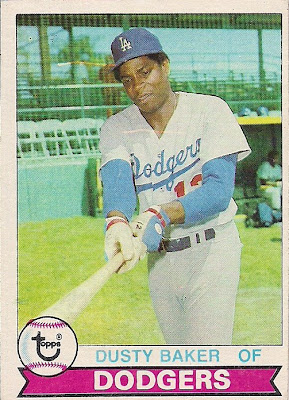 As someone who is a team collector and has been blogging and collecting for some time now, I inevitably receive many duplicates. The large box where I keep my Dodger dupes is now full and there are stacks atop it that have no chance of fitting into that box.

That's OK, because part of the way that I keep myself entertained when I receive a card I already have is seeing whether I can upgrade my current version.

This is especially handy for cards that are older than 25 years. Those are the cards in most need of upgrading.

I receive so many dupes that I have this down to a science. If the Dodger card I already have is perfect in every way except for a fuzzy corner, and I get the same card but it doesn't have that fuzzy corner, then I will be replacing that card. Cold, yes. Heartless, yes. But it keeps me entertained when dupes come my way. And that's all that matters.

But there is one card that I have no hope of upgrading.

For those who collected the '79 set, you probably know where I am going.

The Baker card features some sort of printing flaw. I don't know what it is or how it happened.

But there are two thin orange lines on the card. One is next to Baker's head, and one travels across his chest, like so: 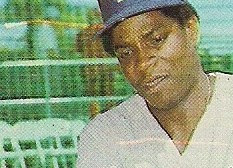 The first time I pulled this Baker card was in 1979 and I am sure I frowned and hoped to pull another one that didn't have the orange lines on it.

But the two or three others ones I saw that year each featured the orange lines.

Decades have gone by and I have yet to find one 1979 Topps Dusty Baker card that does not have those orange lines.

Every one on COMC features the lines, and I'm willing to bet every one on ebay has the same.

There is only one '79 Dusty Baker that I've found without those lines. 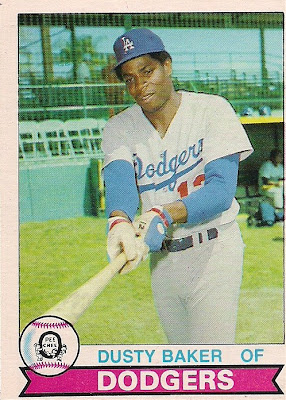 It's the O-Pee-Chee version. Check it out! No lines! It looks wonderfully perfect. Even if the card is off-center, and the bottom edge is ragged.

But getting back to the '79 Topps Baker.

It's actually kind of nice knowing that there is a card out there that is impossible to upgrade.

I'm sure the grading companies have given this Baker card a perfect score based on centering and edges and all the usual stuff. But if every Baker card has those orange lines, it's still not perfect, no matter what a grading company or anyone says.

You simply cannot upgrade it to perfection.

Which makes it the perfect imperfect card.

Anonymous said…
At first I thought this was going to somehow get pulled into my Reds and how they're in danger of getting swept and it meant that Baker was cursed or something...
April 28, 2013 at 11:29 AM

Yankeejetsfan said…
I actually never really noticed the orange lines before. I'm going to have to check my '79 Yankees set later tonight.
April 29, 2013 at 9:55 AM