Managers are people, too 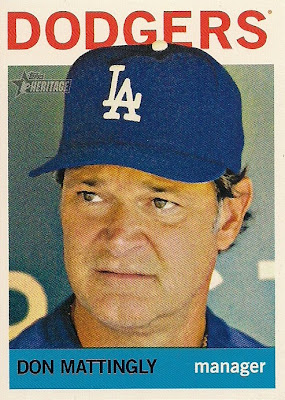 I've come across a card collector or two in my time who don't like manager cards. They don't want them in the set, they get annoyed when they pull them. I've even come across one or two who collect an entire set except the manager cards. And after seeing Mattingly manage the first 3 Dodger games, that doesn't seem like a bad idea.

But actually, I'm completely the opposite. I want manager cards. I was delighted the first time I saw them, which was in the 1978 set. I am sad when I find out the base set doesn't contain them. And I am annoyed when Heritage selects some managers to appear in the set but not all of them.

Manager cards for me are fun. A manager is a key part of the game, you see him during a game just as much as any player. They're the face of the team in many cases. Why eliminate them from a set? Managers are people, too.

The best way to get that across is that all managers were once players. They were players card collectors collected. In many cases, those managers had major league cards in past sets and we collected them then. So why not now?

So  I thought it would be fun to dig up the player cards of this year's major league managers. I selected cards from early in each manager's career. But I limited it to only managers who had cards with big-league teams. So, apologies to Terry Collins, Fredi Gonzalez, Joe Maddon, Jim Leyland and Buck Showalter, you don't get to play this game.

I'm going to show the managers' player cards with the photos cropped down so you can't see their name or the design. Try to guess the name that goes with each picture. Most of them will probably be easy. Some might not be.

So, here you are, this year's 2013 managers, when they were major league players:

Ana Lu said…
I only recognized 3 of them. Misters C. W. and Y. I have yet lot to learn.

I was passing through my '89 Topps cards just yesterday and thinking that I really liked the manager cards too and having them as the team checklist. That makes sense to me.

The first ever packs I got of baseball cards were '04 and '05 Topps and I got manager cards and thought it was usual to get them. But after that I think I never got any manager cards from '05 on. Only when I get older cards.

I think that in '10 I got at least a team card that in the back showed some manager info. But that doesn't count as manager card because he is not in the front. May you correct me if I'm wrong.
April 4, 2013 at 4:11 AM

Play at the Plate said…
That Ron Washington...crazy. I ran across some of his cards in the garage sale loot and they make me laugh every time.
April 4, 2013 at 4:41 AM

GCA said…
I got a stack of Heritage manager cards in trade one time. I've considered collecting JUST the manager cards from all the Heritage sets. I don't think they show up in the short prints too much. Six or eight of my 60's/70's player collection guys now show up as managers anyway...
April 4, 2013 at 7:56 AM

Anonymous said…
Great stuff! I've had a similar post in mind, but I guess I'll have to put it on ice for a while so that it doesn't look like I was copying Night Owl.

Anonymous said…
I agree with you. I wish Topps would bring them back to the base set.

9 is not bad, but it's pretty embarassing that I didn't get my own team's manager. I stared at Dusty Baker's picture for a second and thought "wait, Don Baylor is managing again?" That is not good on my part. First on getting those two confused (a not uncommon problem I'd imagine) and second on never thinking "hey what about the Reds manager?"