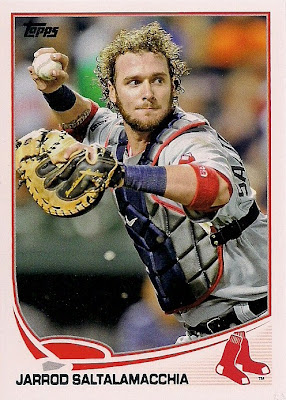 But full credit to them. They made a base set worth buying this year.

And since I am something like 20 cards away from completing Series 1, I figured I had enough to write one of those "best of the year so far" posts that I once did a lot more frequently when I was attempting to complete the set.

So that's what I am doing here. But just for Topps flagship. No Heritage. No Opening Day. No whatever the hell I am ignoring from Panini.

Here are my top 15 favorite cards from 2013 so far. I'm guessing a lot of them are your favorites, too. Or maybe you hate them all. I don't know. 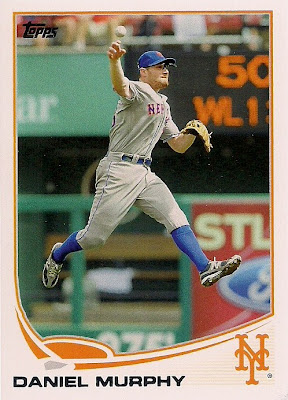 Yeah, there was a lot of debate about who Topps gave card numbers 100, 200 and 300 to this year. I don't have much of a problem with it. Besides, with the way Murphy is walking on air, he deserves it. 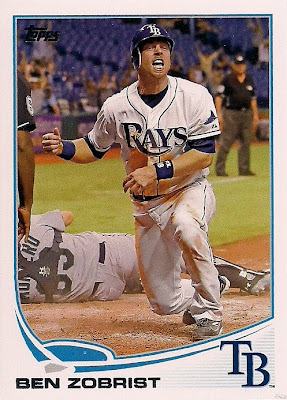 I debated leaving this card off the list. It's borderline annoying. Zobrist apparently is in the beginnings of celebration mode or "ouchie, I hurt so bad" mode. It could be either one. You can't tell. And that's what is so annoying. I like a picture that tells a story. If I want "what do YOU see," I'll go to an art gallery.

But that aside, it's great action. Even if it looks like a shooting scene where one guy is dead, one was just shot, and the umpire is the perpetrator. 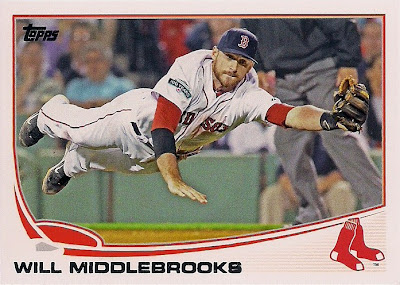 Mid-air dives are always fun because all of us want to be Superman. I'm going to assume that Middlebrooks has that ball in his glove, too. Just going by the serene look on his face. 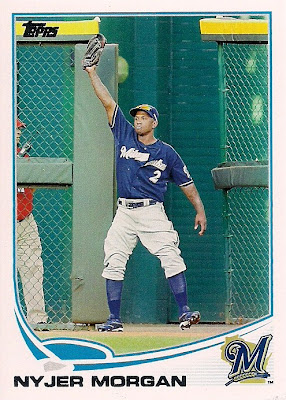 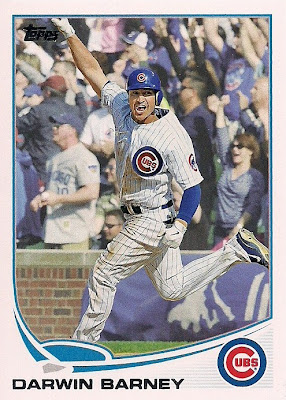 Terrific home run celebration shot. Totally photoshopped. None of that has happened in Wrigley Field for 105 years. 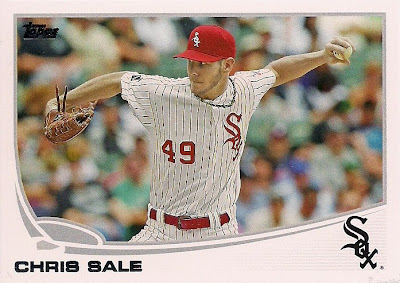 I really do like all the throwback uniforms in this year's set. I'm hoping that Topps doesn't overdo this, although I suppose that's wishful thinking with them, since their secret motto appears to be "kill it before it dies on its own." My favorite throwbacks are '70s throwbacks like this one. The vibrant color contrasts well with the black of the White Sox logo.

I know there is a card of Alex Rios in a throwback '70s Sox uniform, too. But, unfortunately, it's a vertical and this is a vastly better horizontal. Oh, and it's Alex Rios. 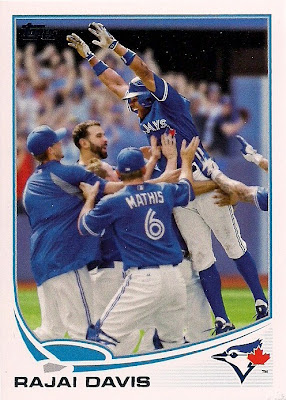 Speaking of overkill -- celebration photos. Let's dial it back, OK? But if you're going to have a celebration shot, show a player doing his Leaning Tower Of Pisa impersonation. I'll go for that. 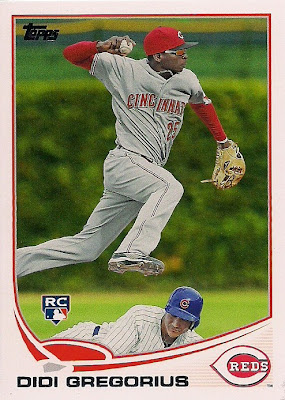 Double play turns are good clean fun, but they can get a little stale. Fine work by the photographer doing something new, and snapping a shot of Didi performing the running man in mid-air. 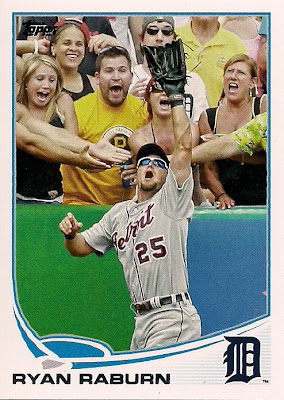 Topps appears to be very proud of this photo, and it should be (although it didn't take it). It was one of the first advertised cards when the set came out, and the card gets a place of first-series honor at #330. I'm not as excited about it just because I'm a cynical bird and I fear that this card will lead to a Topps "get your face on a Topps card!" campaign in which us collectors will be burdened with collecting a card of Tom from Topeka just because Tom had a few too many beers one night and thought the photo of him looking like a fool at a ballgame might be worth appearing in packs of cards across the world.

That aside, it's a fine photo. 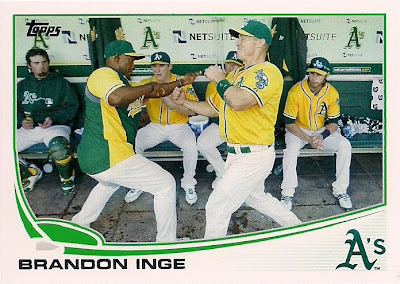 I'm not a fan of choreographed stunts in sporting events. I've said this before. However, this "stunt" was performed in a dugout, out of view of the adoring public. Just a couple of ballplayers having a good time. Nothing wrong with that. And the photo provides a view of the dugout from an angle that hasn't shown up too often on cards. 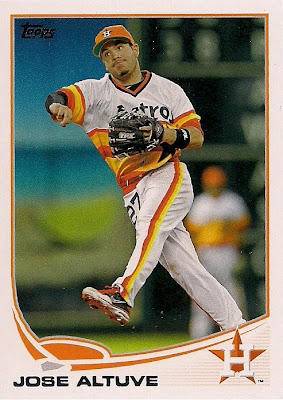 Are you jealous that you didn't grow up in the 1970s and get to wear groovy clothes like this? You should be. 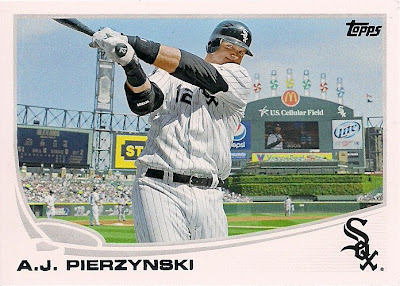 This is reminiscent of the Jim Thome card from 2009 Topps, although this photo has the entire White Sox stadium backdrop in the picture. I can't stress this enough: THERE NEEDS TO BE MORE PANORAMIC PHOTOS OF STADIUMS IN CARDS. I'd prefer that the posed player is someone less annoying than Pierzynski. But that's a small thing. 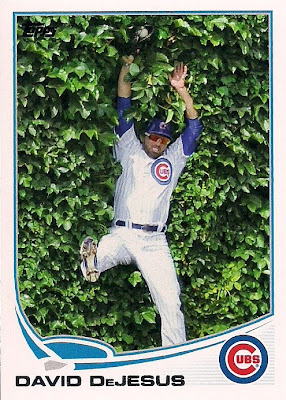 I am a perpetual admirer of outfield shots, just because I remember how difficult it once was for photographers to get pictures of outfielders. They were too damn far away.

Now, the photographers not only can get the outfielder, but they can get him as far away as possible -- back against the wall -- with the ball in his glove! Outstanding. It should make all the photographers who didn't take this photo green with ivy ... er, envy (heh). 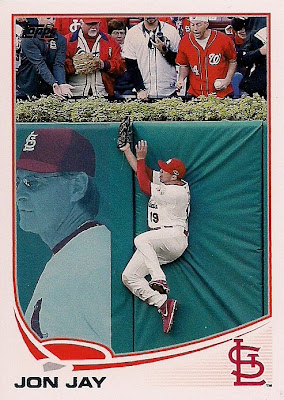 Memorable play, memorable photo, memorable cropping. I like everything about this -- and then a giant image of Tony LaRussa goes and swallows all the goodness. Well, not all of it. 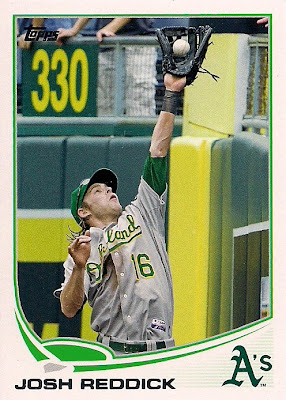 You may have noticed that the top three cards here are all of outfield plays. I will always value "degree-of-difficulty" over "artsy clever posed shot" when it comes to card photos. Both are not easy to pull off, but the fantastic action play is not easy to pull off and the photographer has to get it in a matter of milliseconds.

To get the ball in the glove of a leaping outfielder at what appears to be the foul line -- and get it all in focus -- is a tremendous feat.

It's going to take a lot for anything to knock that card out of the No. 1 spot.

Speaking of which, Series is 2 is just a month away. My hope is that Series 2 matches up with Series 1 in terms of quality. It usually doesn't -- I don't know if that's just collectors' weariness with the set or an actual fact. But I'd like not to be disappointed.

Why do I care?

Just a fan of cardboard, whether I'm trying to complete the set or not.

madding said…
Aside from the Jon Jay card (which is an obvious one for me - I had the picture they used for this as my desktop background for months), I am a big fan of the Middlebrooks and Altuve cards. Reddick's is good, but it reminds me of some posed Bowman photos that I've seen.
April 11, 2013 at 8:23 PM

Red Cardboard said…
Hey you got a list of the cards you need? I got a pile of 2013 base that needs a better home.

Much love for the Gregorius and the Frazier. Go Redlegs!

Adam and Elissa said…
As an amateur photographer who takes baseball shots for making my own custom cards I fully agree, especially with getting decent outfielder photos. Enjoyed your post. Adam. ozcards@blogspot.com.au
April 11, 2013 at 10:22 PM

Nick said…
I think my #1 so far is Adam Greenberg's 2013 Topps card, simply because of his story.

But, photo-wise, it's hard to argue with your #1 choice. The Inge and Raburn are also a couple of my favorites. And I completely agree with your panoramic sentiments on the Pierzynski.
April 12, 2013 at 12:23 AM

GCA said…
You're right, it is getting too confusing, because those great cards of spectacular plays are NOT the variants of spectacular plays. There is even one of a catcher snagging a foul behind the plate. It is not a variation. Just like the Phillies guy from a couple years ago that was photographed with the filter that made the shine on his helmet look like a star but it was not one of the sparkle variants.

Topps has stepped up the photography several levels in the last couple years, but these gimmicky variations that only include some but not all of a particular picture are growing tiresome. I always get three or four of the non-variants, but hardly ever pull a real one.
April 12, 2013 at 8:27 AM

Anonymous said…
Great minds think alike. Alot of the ones you mention are my faves as well. The Reddick is my second favorite - behind the Barney. I just love the pure joy displayed.

Anonymous said…
Also, I like Nyjer Morgan! Especially after he dropped f-bombs on national TV.
April 12, 2013 at 9:46 PM