April 02, 2013
(I was just realizing that I posted more than 40 times last month. I hadn't posted that much since last May and haven't been consistently above 40 since 2011. What's that mean? I don't know. But don't get used to it. Time for Cardboard Appreciation. This is the 178th in a series): 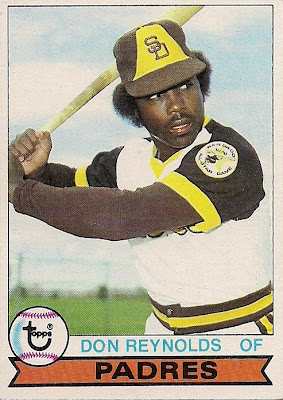 He wasn't cheated in the way that you would think. It's not that he didn't get a shot at a long major league career or that his younger brother, Harold Reynolds, became much more well-known, or that his big-league career was done by the time Harold made the pros.

It's that I never had the chance to worship him in cardboard form.

This is the only Topps card of Don Reynolds. It's No. 292 in the set. I received this card a couple of weeks ago in a package of 1979 Topps, which you will read about in the next post. When I shuffled through the cards and came across this one, I stopped as I often do when seeing a card that is not cataloged in my brain.

Not recognizing the picture, my eyes traveled downward to the name. It read "Don Reynolds," and there was not a flicker of recognition.

So what? You're saying. It's not like you're on Jeopardy and Alex Trebek is going to throw at you: "he appeared on his only card in the 1979 set and is Harold Reynolds' brother."

But Don Reynolds? I never got the chance. I never pulled him from a pack, and neither did anyone else I knew.

All that knowledge. The fact that he hit .368 for Hawaii in 1978, the fact that he "enjoyed a superb career at the University of Oregon," the fact that he was born in Arkadelphia, Arkansas, snippets that I would re-read and recount never committed to memory. Because I never pulled his card.

And then he was gone, never to appear on another card.

The collector I am today isn't the same collector he was when he was 13. I look at Reynolds now and don't see a baseball-playing god of the '70s filled with hope and promise with stats worth memorizing. I look at a guy in a goofy uniform, who is Harold Reynolds' brother, and immediately look to see what he's doing now (he's a scout with the Diamondbacks).

Reynolds, I'm sure, doesn't feel cheated by this. So maybe it's me that feels cheated. When asked to list the roster for the 1978 San Diego Padres, I wouldn't be able to say, "and don't forget about Don Reynolds, who back up Gene Richards!"

So now, I guess Trebek can call me up and invite me on the show. I hear he's been waiting.

(If you like stats on the back of cards, you might want to give the fun and free High Heat Stats quiz a try. It's a quality way to waste your lunch break).

hiflew said…
I feel that way about a few 1986 Topps cards that I did not have as a kid. There were only a small handful that I didn't ever get when I was young. Ron Guidry, Howard Johnson, and Ken Landreaux were among the few that I never got back then. But Darrell Miller is the one I remember most just because he wasn't that well known.
April 2, 2013 at 3:30 AM

Unknown said…
Don Reynolds, I pulled his 1979 card many, many times that year. I knew it well!! I never realized he was Harold Reynolds brother. You learn something new every day. Thanks!!
April 2, 2013 at 4:50 PM