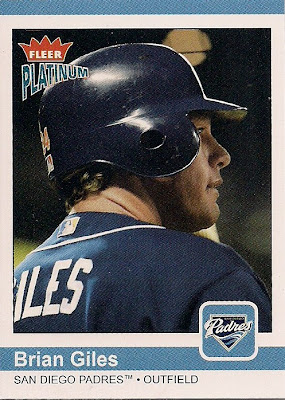 While looking at this card a few days ago and noting how bizarre it was for the photographer to zoom in on Brian Giles' helmet ear hole, I wondered what I could write about it.

Most of what I know about Giles can be summed up in the fact that he once played baseball in my town as a member of the Watertown Indians, that he enjoyed a terrific four years for the Pirates between 1999-2002 that went completely unnoticed, and that he was involved in a bizarre relationship with a former dancer that led to all kinds of ugliness.

So I turned the card over and looked at the back.

This is what I read:

OK, this might be mildly interesting. Why a major league player these days would feel the need to be anything after they retire with ungodly sums of money is a question worth considering.

So I looked around for a minute and it turns out that he said that during one of those wild-and-wacky Dan Patrick Q&A interviews.

I have to say I didn't come away with any more of a favorable opinion of Mr. Giles after reading that. Among the things that admits to doing in the interview is: getting his hair frosted, having a tanning program, and liking Cher.

I almost didn't get to the meteorology part because I thought I was going to throw up.

It turns out -- who would have thought in a Dan Patrick interview, huh? -- that Giles was just spitballing. Players know they can say wacky stuff in Patrick's interviews and -- guess what? -- ESPN actually goes and prints it. So Giles said he wanted to be a chef at a chain restaurant or stand in front of a green screen and talk warm fronts. And we're supposed to believe it.

And that's about all I thought of to write off this Brian Giles card.

I guess it's better than, "why's the ear hole the focus of the picture?"

Night Card Binder candidate: Brian Giles, 2004 Fleer Platinum, #9
Does it make the binder?: Hell, no. First, my most favorite night card is #9. Second, no one watching Divas Live From Vegas gets in the binder.