April 11, 2013
(We are creeping up on the chance to enter another card into the Cardboard Appreciation Hall of Fame. It's been awhile, eh? Five or six more C.A.'s and I will begin another vote-off tournament to decide the third inductee into the Hall. But until then, it's regular, old Cardboard Appreciation. This is the 179th in a series): 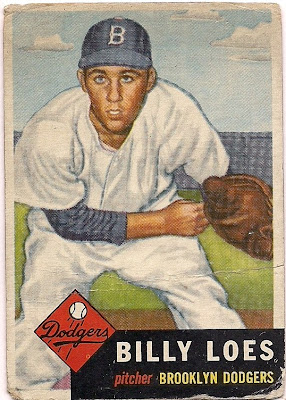 I received this card in yet another Twitter Trade the other day. It is a glorious 1953 Topps card of Billy Loes, that appears to have been gnawed all the way around by a ravenous hamster.

It's unusual because the vast majority of the painted pictures in the '53 set are your average head-and-shoulders shots. In fact, 260 of the 274 cards in the set feature heads, shoulders and not much else.

How do I know that? Well, I did my research, silly.

There are exactly 14 cards where you can see at least some portion of a player's legs. The most famous one is the Willie Mays card.

So that puts Loes in some pretty rare company.

Another strange thing about the Loes card is that his uniform doesn't feature the Brooklyn or Dodgers script across the chest. There is actually at least one other example of a card like that in the set. But most of the 14 full-body paintings in the set feature the uniform name, too. My guess was this was just the artist's discretion. No license-legalese over silly things like team names back then.

The other odd thing about this card is the way the uniform is drawn on Loes, all wrinky and wavy. It appears at least two sizes too large on him. A quick glance at the photo and Loes looks like an apparition hovering over the field. And the puffy, white clouds above frame Loes and his uniform nicely.

This is just my fifth 1953 Dodgers card and I thank Ben for it.

He also sent me a parallel version of the best card of 2008: 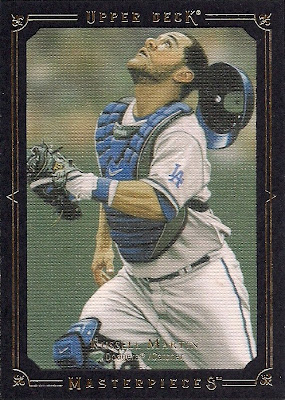 And he threw in the famed unibrower: 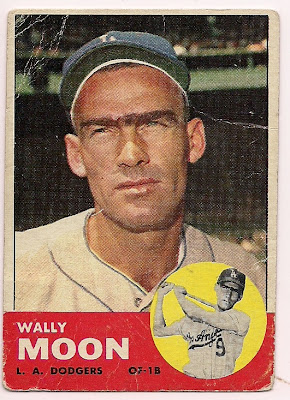 Of course, all this vintage is just making think about the card show again. I think I'll spend some time near the 1950s cards and listen to what speaks to me.

Play at the Plate said…
That Loes is amazing. Nice addition to your collection. Card shows...50's tables...jealous.